Review: Batman and the Outsiders #10 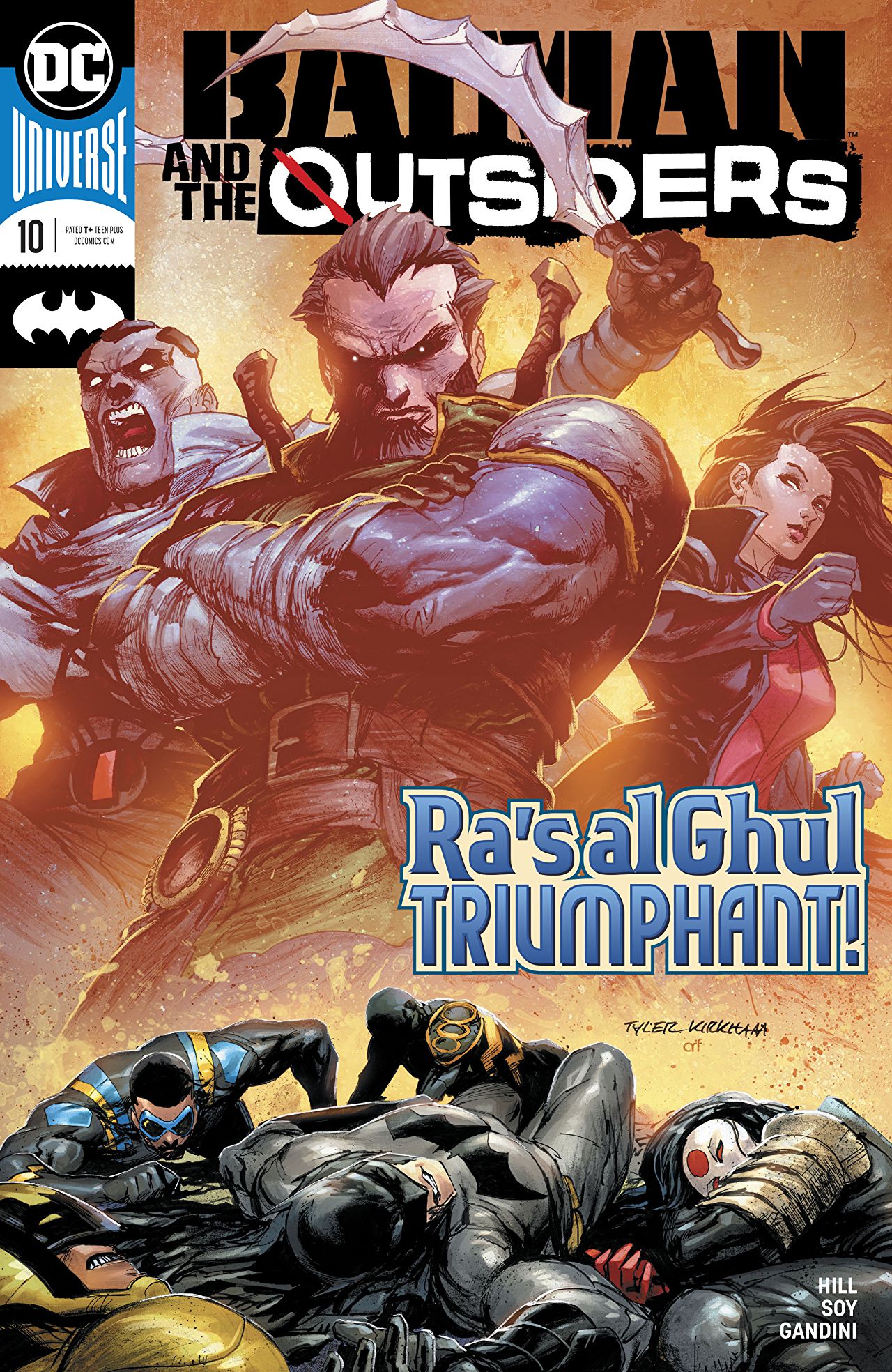 Overview: Everyone plots their next move as Jefferson goes missing. Unbeknownst to them, Jefferson is across the globe in the violent hands of Lady Shiva!

Synopsis (spoilers ahead): We open with Sofia venting her frustrations on an abandoned building, wrecking debris around her like it’s her own personal punching bag. Batman arrives and offers her an opportunity to turn away from a life of vengeance and violence, assuring her that whatever move she makes, he will not force her hand.

Elsewhere, Katana, Duke, and Cassandra all come to the conclusion that Jefferson has been off the grid for thirty hours, and that Ra’s al Ghul is likely behind his disappearance. They agree to find Jefferson first, then get to the bottom of Ra’s schemes – whatever they may be.

At a particular meeting place, Bruce meets up with a Markovian contact to gain intel on a mercenary named Kaliber and a Black Market weapons fence named Martina Dementieva. His info-woman – Elfa – says that Martina has been on the run for a while and that she once had possession of a “doomsday weapon” of alien origin. Bruce pays her twice their agreed-upon amount so that she never repeats the information she gave him.

In Cambodia, Shiva is treating Jefferson to a fancy dinner. While the lady is coy, she assures Jeff that she is not in cahoots with Ra’s al Ghul and that her primary concern at the moment is getting closer to her daughter Cassandra. She points out Martina Dementieva in the restaurant and relays the information that she is kept alive in order to discover Ra’s’ plan. A fight ensues between Jefferson, Shiva, and Martina’s bodyguards, and the latter ends up on the beach and in need of medical help. Black Lightning promises to keep her safe in exchange for information right before she is killed by Ra’s acolytes. Just as another fight is about to start, Katana, Signal, and Orphan arrive in time to even the odds.

I generally like the characterization. Bryan Edward Hill does not write Batman as a jerk in his work. Bruce is always very empathetic and keen to respond emotionally when he can, while still being taciturn. I think I’m wanting to see more action on Bruce’s part, but the scene with his contact Elfa was good for what it was. There’s rarely consistency on what Bruce allows people to see of him outside the costume, and for a billionaire playboy to be having shadowy “Deepthroat”-esque meetings with spies, more interest in what Elfa thought about all of this would’ve been appreciated.

Ultimately I wish Hill’s writing style was more dynamic. The scene with Katana, Duke, and Cass talking about rescuing Jefferson portrays the three as so unemotional; it’s almost robotic. I know Tatsu’s Japanese heritage leads her to have a certain diction in her voice, but with lines like “Wise. So we are in agreement,” it is unbelievable. It’s the same problem with how Cass has been written since she’s been brought back into continuity, where the broken English reads more stereotypical than like someone who just learned to talk. Complementing the problematic writing is Dexter Soy’s art. It’s good in that the figures are striking and he’s solid at action sequences, but the staging is so static and un-involved. We open up the aforementioned scene with our three heroes, and Duke is passively leaning onto the wall with one leg propped up. Aren’t they coming to the realization that one of their teammates is most likely kidnapped?

A definite plus for this issue is the writing of Lady Shiva, and I really hope this isn’t a trick or a swerve. Shiva’s character throughout her history has a long record of her being her own woman, a true iconoclast. Her being beholden to anyone or power, whether it’s the League of Assassins or anyone else, doesn’t jive with earlier depictions of her in Richard Dragon: Kung-Fu Fighter, or Denny O’Neil’s The Question series. It wasn’t until she started getting used in the Bat-Books that she became overtly villainous, but going back to the Puckett/Scott run of Cass’ Batgirl book, she was closer to her original amorality than not. It’s nice to see her not fall into the pernicious dragon lady evil servant trope and having her deny fealty to Ra’s works in service to that.

Final Thoughts: This book is written as an action book, first – last – and always, but it has the potential to be much more. More scenes establishing the dynamics of Bruce and Jefferson, Jefferson and Duke, Duke and Tatsu, Cassandra and Jefferson – all of that would be appreciated. It’s very single-minded on its main hero/villain plot, and that only goes so far in terms of interest. It’s right on the cusp of being truly good.