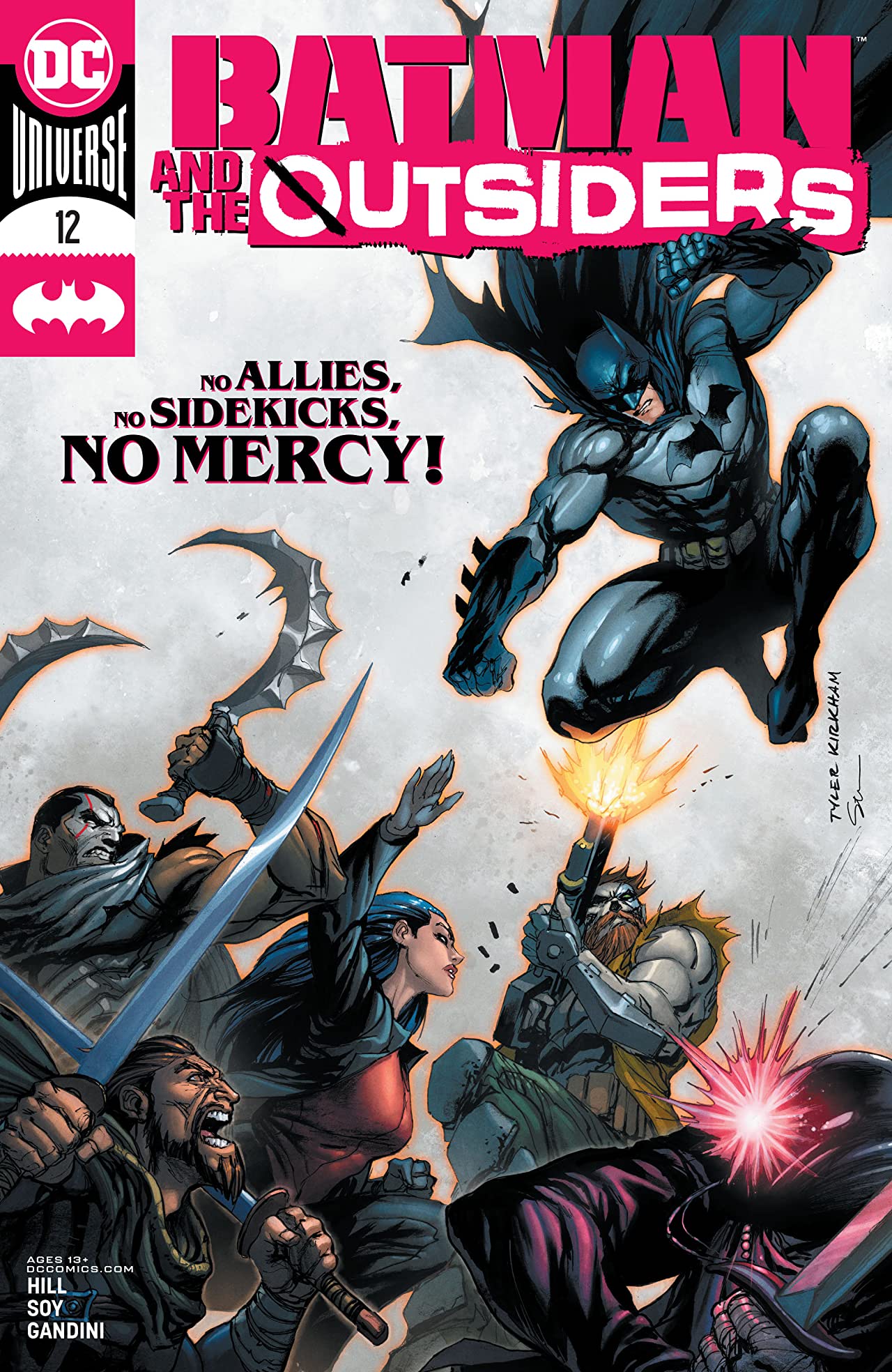 Overview: With the Outsiders rejoined, Batman and Shiva lead them into the final assault on Ra’s al Ghul!

Synopsis (spoilers ahead): Back in Gotham, Batman addresses the Outsiders and lays out what Ra’s al Ghul intends to do to the planet Earth. He brings in Sofia (who does not have a codename). Batman also welcomes Lady Shiva into his ranks, who states that she should only be trusted insofar as she intends to stop Ra’s. Jefferson asks Bruce why he didn’t stop Jefferson when he planned to avenge his coworker’s death. Bruce responds that he can’t make decisions for his teammates, and the two acknowledge that the Outsiders are all going down individual paths that will ultimately split up the team. Lady Shiva tells Cassandra that once the world is saved, she wants her daughter to leave with her, as her place in the Bat-Family is not a reciprocal one.

Arriving at the Markovian desert, Batman and the Outsiders discover that Ra’s has killed his men and absconded with alien technology, demonstrating its use (communicating via hologram) by destroying Shiva’s birthplace in China. With renewed resolve, the heroes vow to defeat Ra’s before he destroys the world.

Analysis: I like more of the events in this issue, even though much of it is setting the stage for the final confrontation with Ra’s. The character development, establishing where everyone is emotionally, and foreshadowing how things will progress in the future made this an exciting one for fans of each of the various heroes.

This isn’t to say that my problems with Hill’s writing have changed. He still presents everyone with the same monotone seriousness that stiffens drama into dullness, overcooking the gravity of choice to where you’re not feeling much for anything. I don’t think there’s been an issue where someone hasn’t just abruptly exited a scene rudely, as if such a dramatic beat would deliver any kind of surprise or halting of suspense. It makes every scene feel the same emotionally and robs the characters of the diversity in their personalities. The brightest character in this book is Duke, but you wouldn’t know it by how he’s often written (and drawn) to be grimacing in every panel.

All that being said, I did like this issue better than the last few because of where Hill seems to be taking the characters. He’s been working hard to redeem Shiva from years as a rote, cliche supervillain back into the ambiguous figure she’d been known as over twenty years ago. Her interest in Cassandra – lacking the mustache-twirling villainy of Tynion’s writing – is fascinating to read, because of what plans might she have for her daughter. To train her? To raise her? Either way, it’s sure to mess with Cassandra’s head, as pitting her against Batman in any scenario is a good conflict to give her. I didn’t agree with the tears Shiva displayed after Ra’s destroyed the village because Shiva’s never shown much interest in protecting the innocent on a humane basis. It was a means to move her away from being a villain, but I thought it was a misstep. Ultimately there have been worse things to gripe about.

The scene between Batman and Black Lightning was another highlight, and scenes like this have been a highlight for most of the run. While Jefferson has spent the series kvetching about Batman’s controlling nature, Bruce has done nothing but demonstrate restraint and trust towards him and his team. It’s a smart move, as Hill knows Batman’s bossy nature might be read the wrong way when directed at a grown man of Jefferson’s stripe. It makes for a highly interesting pairing, to have two characters repel each other towards a common goal. As a duo, I’d like to see more of them.

I can see Hill swerving us at the end of the storyline, by killing one of the characters or doing something to rob them of the proposed walk into the sunset so many of them have been suggested to take, but things might indeed end up that way as well.