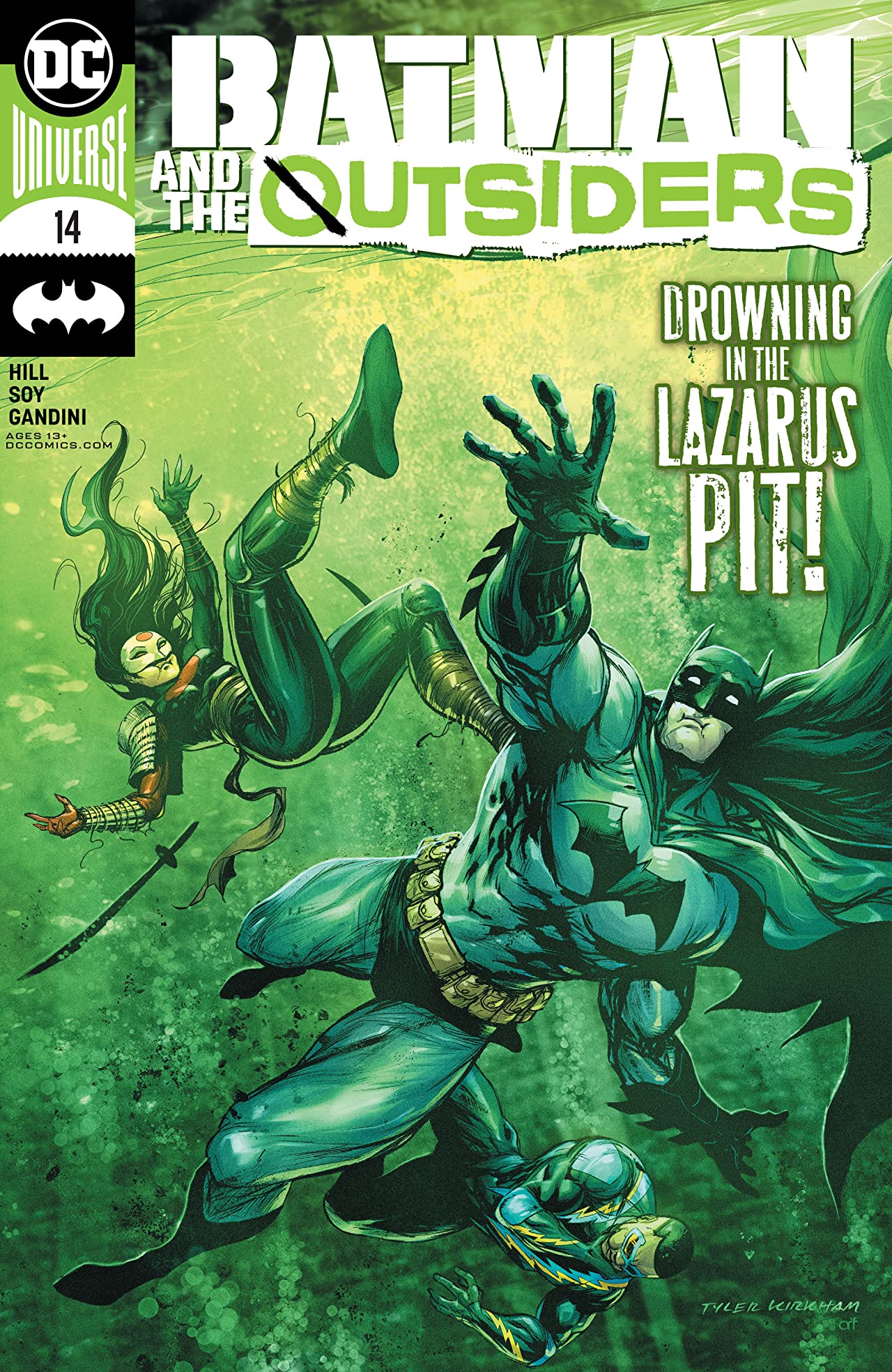 Overview: The stage is nearly set for the final confrontation with Ra’s al Ghul! As Batman gathers intel on one side of the world, Lady Shiva forces it out on the other side!

Synopsis (spoilers ahead): Black Lightning is imbued with more power, having reached further depths with the help of Batman’s technology. With it, he taps into the electromagnetic power signal from Ra’s’ weapon, tracking its source. Batman, Sofia, and Black Lightning travel to Khadym to attack some of Ra’s strongholds, beating up his followers and forcing information out of one of them. Meanwhile, Shiva, Orphan, and Signal go to London, interrogating one of Ra’s’ bankers. Signal uses his ability to control darkness to further threaten the banker, while Orphan holds back, waiting for the chance to prevent Shiva from killing him. Unbeknownst to both teams, Batman and Shiva have been in direct contact with each other, and they both resolve to travel to Japan to intercept Ra’s.

Analysis: Dexter Soy is back on art, and I’m once again compelled to say that although I appreciate his moody style, his storytelling talents are lacking in how monotone and non-engaging they are. Through Hill’s declarative dialogue, the characters return to looking dark, serious, morose, and stilted. Everyone’s posing, everyone is in a shadow, and everyone is super serious. The last issue told a similar story but Gleb Melnikov’s fill-in artwork normalized things with a dynamic new style that didn’t rob the story of its intensity but calmed things down where the character didn’t come off as so one-note. But as I continue to review this book, I’m wondering how much fault of Soy’s storytelling falls back down on Hill.

The best scene is near the beginning with Katana, Shiva, Duke, and Cass. Katana wanting a rematch with Shiva, which delights and amuses Shiva made for a fun follow-up to their scenes from the last issue. Everything else… I mean, none of it is bad. The characters, for the most part, are all on point. I still enjoy how Batman is written, with his tactical nature on full display. But it is so self-serious, that it’s siphoning off all suspense of what’s going to happen next. We’ve been building up to the final confrontation with Ra’s al Ghul for three issues now, and while the set-up is appreciable for a battle with a major villain, especially one of Ra’s’ nature, it feels like wheel-spinning. We’ve got the same story of Shiva trying to wean Duke and Cass off of Batman’s influence, but there’s no consequence from them following Shiva, as Batman is both aware and compliant with their decisions. I like that about him in a certain frame, but he was fairly strict with them a few months back, which made them feel even more defiant. The twist that Batman and Shiva are in cahoots doesn’t feel as important as it might because A) the issue immediately ends, and B) we don’t see Duke and Cass react to this. Were they lied to again? Do they feel relieved that they’re not being solely led on by a murderer?

Hill establishes the same line with every character, but there’s little movement within those lines. Batman is calm, collected, and focused. Jefferson is skeptical of everyone and warily listens to Batman. Katana distrusts Shiva but believes in Jefferson. Duke and Cass want to follow their own paths but are unsure of who to trust. Shiva trusts herself. We hit these same beats with each and every issue, and while they’re good beats, it’s severely repetitive for characters that have been shown to be far more dynamic than they are in this book.

I also resent the tone of voice for Shiva and even Batman in some scenes. This is a nitpick, but I think with Batman – at some point, he gets to enjoy his aggression towards Ra’s. He relates to Ra’s on some level, so when battling him, he puts more energy and personality in their duels. Lines like “My thoughts are on the moment.” sounds too… contemplative for him in this situation. If he were dealing with someone less known and more cunning, like an unknown foreign enemy, I could see him speaking like that as an expression of him centering himself. As I said, it’s a nitpick. Less so is Shiva’s voice, which I’ve criticized before. She speaks as she did in Richard Dragon Kung Fu Fighter, only with less zest. Referring to Cassandra as “daughter” really bugs me, as it feels like a spontaneous acknowledgment of Cassandra that doesn’t jive with a better version of their relationship. Also, she sounds like Ra’s al Ghul. Something even more personal than like “baby” might feel odd, but it would give her more personality.

Final Thoughts: I’m again frustrated with this book because it takes itself so seriously that it robs itself of a lot of charm and charisma that this collection of characters affords it. It’s never bad, but it’s often not good either.