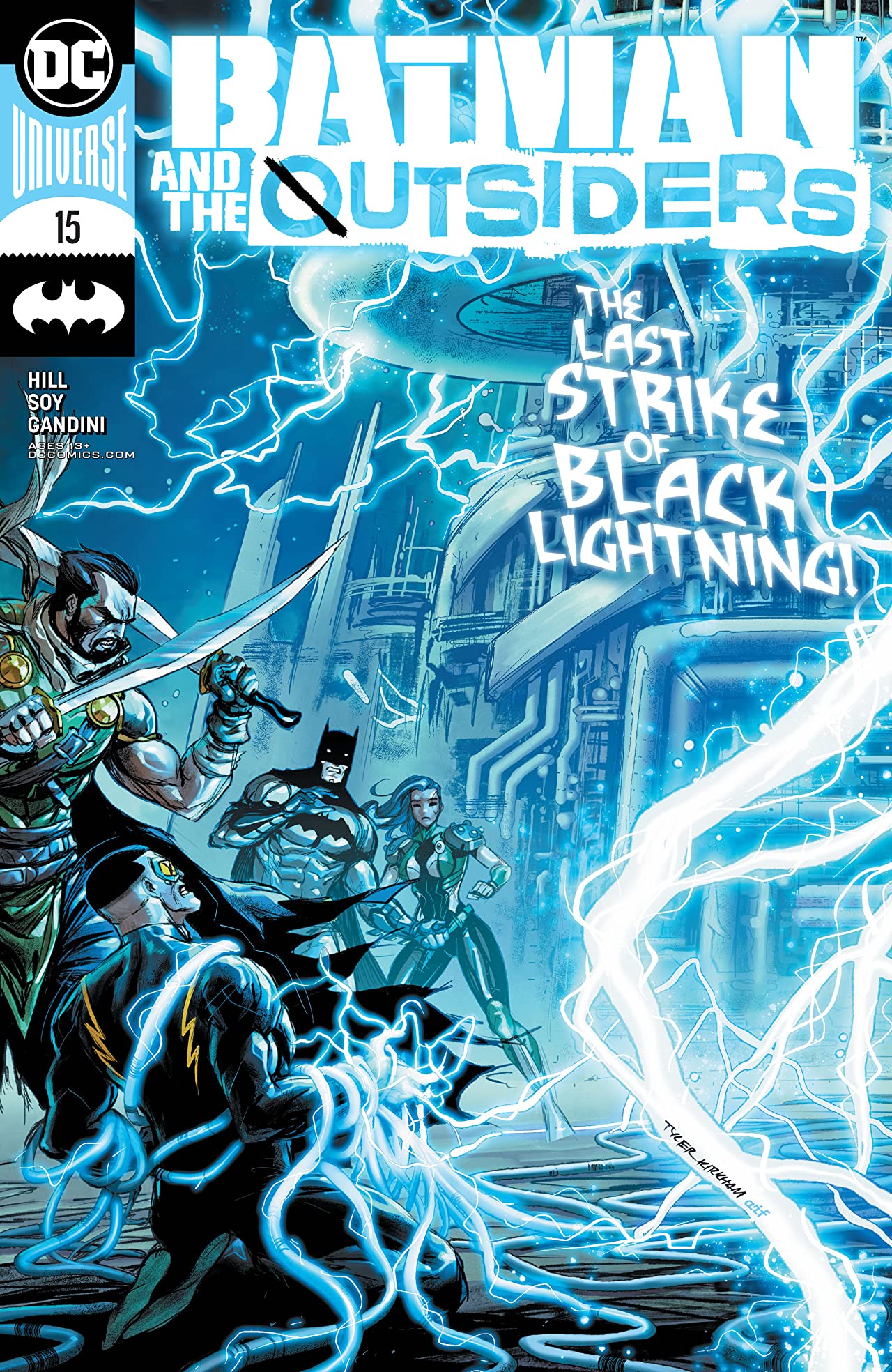 Overview: Everything comes to a head when the Outsiders confront Ra’s for the final battle in Tokyo!

Synopsis (spoilers ahead): Batman and the Outsiders (Katana, Black Lightning, Orphan, Signal, Sophia and Shiva) hunt down and interrogate a mercenary who sold Ra’s al Ghul arms and armed men. They learn that Ra’s sought out the Master Group, a consortium of business leaders who run an organization that powers injustice in the world. Batman knows that Ra’s would want to destroy them, but Batman’s primary goal is to destroy Ra’s alien tech that he used against China. Jefferson uses his new abilities to sense where Ra’s would transport the weapons, which is at the Master Group’s top floor in Tokyo, Japan. Just after Ra’s broadcasts his threat upon the world in multiple countries, Batman and the Outsiders arrive to take him down once and for all.

Analysis: Let’s see what I can say about this issue that’s fresh and new.

For one thing, we’re finally now at the battle between Ra’s and Batman. As I’ve said before, Hill has been building towards this confrontation for a length of time that has felt both too long and just long enough for a match-up of this magnitude. The problem isn’t so much that it’s taken nearly the last year of issues to lead to where we’ve arrived, but that the writing style hasn’t made it felt as though much has happened in between. We’ve got the attack on China, Katana’s hometown in fact. We’ve gotten Shiva conspiring to take Orphan and Signal away from Bruce and Katana’s feelings on that. We’ve gotten Jefferson’s new ability to sense where electromagnetic waves are being utilized. But that’s been stretched over too many months for it to feel like this has been an impacting story month-to-month. This issue does well in getting us where we need to go, but I can’t help but wonder if there was any way to get us here faster.

By now it’s been solicited that the series will end with issue #17, which is two months from now. I posited that to be the case in the last issue as all signs indicated the team splitting up. Hopefully, it’ll go the Tynion route and not have it be ridiculously acrimonious, especially since Batman has been nothing but good to the team and helped Sophia find confidence in her new abilities. Jefferson’s been a pithy month in and month out, so I’ll be irritated if the series ends with him enacting one of the various random covers this book’s had where he yells and leaves in disgust, furthering the false narrative that Batman is a lousy leader. In the past, Batman has been ultimately unhelpful towards the Outsiders team. I’m thinking of the time he neglected to tell Geo-Force about an uprising in his hometown of Markovia for the sake of completing a mission. Although the continuity of that book is in question, there’s been so much contrition with Bruce in this series, that if it ends falling on Jefferson’s characteristic dislike for Batman’s methods, I’m just going to end up calling him a dick.

Shiva doesn’t have much to do in this issue, which isn’t a bad thing. She’s had plenty of development throughout the book, and it’s all been good. I’m still not loving her dialogue, but that’s an old complaint. Hill said on Twitter that there were plans for Cassandra in the near future, but we’ve all heard that before. A Shiva/Orphan (I prefer Batgirl) miniseries would be sick, but Cass is about to get caught up in Joker War with Stephanie. Will Shiva die again? Hopefully not, she’s far too compelling of a character for that to happen, and it was dumb in Tynion’s run in the first place. That only leaves us wondering about Katana and Signal. Signal will probably appear in Joker War, but I am unsure about Tatsu. I like her role in this book and hope she and Jefferson stick together.

Final Thoughts: This issue accomplished what it set out to do in getting us to the final battle, but it wasn’t very dynamic in arriving there. Still, the book is always moderately enjoyable, and we are at the precipice of a big finale.