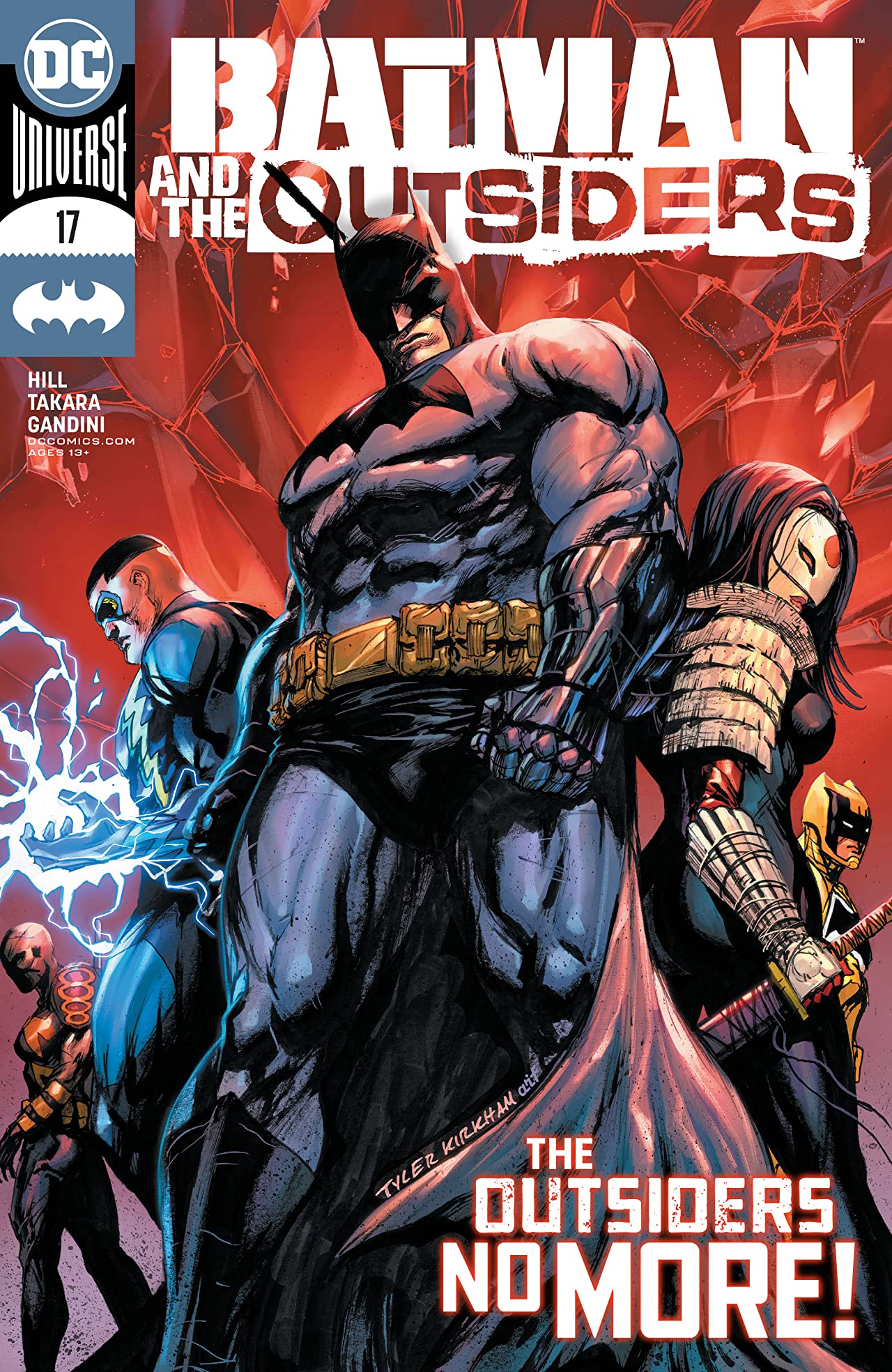 Overview: With the world saved from Ra’s al Ghul, the Outsiders ponder their next mission in life, knowing that whatever may come, each of them needs to face it alone.

Synopsis (spoilers ahead): North of Gotham City, Bruce has gathered the Outsiders and Shiva to a private farm, celebrating their victory over the League of Shadows. He gifts Sofia with a horse and ownership of the farm, fulfilling a promise he once made to her late father. Sofia is grateful but openly acknowledges that Bruce intends to keep her nearby in case he needs her abilities to combat evil in the future.

Speaking of the future, Jefferson is frustrated over the inability to predict his. He’s doubtful about returning to work as a schoolteacher. Tatsu appreciates his confusion and offers him companionship on her own journey to the Realm of the Sword.

Meanwhile, Shiva offers to help both Duke and Sofia with their current abilities. Duke believes in his role as the Signal, but Sofia is less confident about fighting crime Batman’s way. Shiva gets Sofia to admit that simply jailing criminals isn’t sufficient justice for her.

Bruce finds Cassandra practicing her reading. He tells her that the reason that he didn’t make her Batgirl or take her in like he did the previous Robins was that he knew she was different, and her unique abilities required a different upbringing. He tells her that he not only trusts her, but has faith that whatever the future may hold, he believes in her. Cassandra is overwhelmed with emotion, and they embrace.

Later, Bruce wakes up on the floor, realizing Shiva drugged his tea. He runs downstairs to find the house empty, save for Shiva who explains everyone’s whereabouts. Duke and Cassandra returned to Gotham, Jefferson and Tatsu left together, and Sofia simply vanished, although Shiva infers that she’s leaving with her. Bruce feels affronted that Shiva took Sofia away from him, but Shiva retorts by saying it was payback after Bruce took in Cassandra. She threatens him not to pursue. She also tells him to cheer up as each of the Outsiders were grateful for his help, especially Sofia. In the final page, we see the two women leave together, while Bruce is left alone in the now destroyed kitchen of the house.

Analysis: I didn’t love the previous issue, the conclusion to the Ra’s storyline. It spoke to what I feel has been Hill’s weaknesses in this run, but I would go so far as to say that Dexter Soy’s artwork, while solid, limited the character expression and hindered what Hill was going for. In this issue we have Marcio Takara closing out the title, an issue that has no costumes and is a bunch of friends discussing their future together. Soy would’ve been wrong for this kind of story, but like with issue #13 with Gleb Melkinov, the change in artists works in Hill’s favor. I didn’t love the previous issue, but I nearly loved this.

Fans are suckers for character growth and interactions, and Hill is a fan of these people (clearly), so I feel his tense, sometimes stilted character interplay works when the stakes are relatively low. The Jefferson and Tatsu scenes are the same as they’ve always been, but with the danger behind them, they take on a different shade. They also posit the characters towards a way future fans can expect to see covered sooner or later. I’m not sure when we’ll see Jeff or Katana again, but I’m happy to know that they’re fighting together. Same with Sofia, although Hill has said on social media that there are plans to use Shiva down the line. This issue is said to take place before the end of Joker War, explaining Cass and Duke’s return to Gotham. It also explains Cass’ Batgirl costume in that storyline, so Hill sets that up well here. The scene between her and Bruce was another warm and fuzzy moment for someone who enjoys their familial relationship.

All that being said, Hill’s Shiva writing impressed me the most here. I have to imagine with her creator Denny O’Neil’s passing, Hill must’ve gone back and re-read some of the 80s Question series, because there were moments that strongly echoed the Shiva from that run. He’s been rebuilding her as the indomitable force of nature over the course of the title, but with this issue Shiva echoes O’Neil’s 80’s Shiva most plainly, specifically early on in her scene with Duke. Takara must’ve been directed to look at some of the Denys Cowan panels for inspiration because the similarity is too striking without being a swipe. And I applaud the creative team because Shiva will always be a great character the less you define her. Hill proved that she works best as a foil to Batman but not an antagonist. Everyone is wary around her, but they can’t help but listen. It’s a terrific character representation, and I hope this version sticks around for the foreseeable future, especially if she tangles with Cassandra anytime soon.

But like Shiva throughout the run, I’ve always liked Hill’s Bruce/Batman. He’s always been a sympathetic, sagacious Batman who never acts like a violent bull in a china shop, which has been the popular iteration for too long. Both Hill and Tynion prefer a simpler, less toxic Caped Crusader, and while the title ends on a bittersweet note that feels somewhat obligatory towards the modern era, I liked how Bruce’s relationship with this second Bat-Family was depicted with him being easygoing and trusting, but still believing he knew what was best for the teenagers. That rang true, and Shiva taking Sofia away from him was a good swerve that pushed him.

Final Thoughts: Hill ended this series with possibly the best issue of the run. The title overall could be repetitive and slow going, but his attention to character growth was never underappreciated from me. It was a great series that collected several characters of color together and put them in a spotlight that showed real consideration and care. It was never perfect, but it was always a series that I enjoyed having just as a fact of DC Comics’ history. For that reason, Bryan Edward Hill has a lot to be proud of, even more so with this final story.