Review: Batman and the Outsiders #1 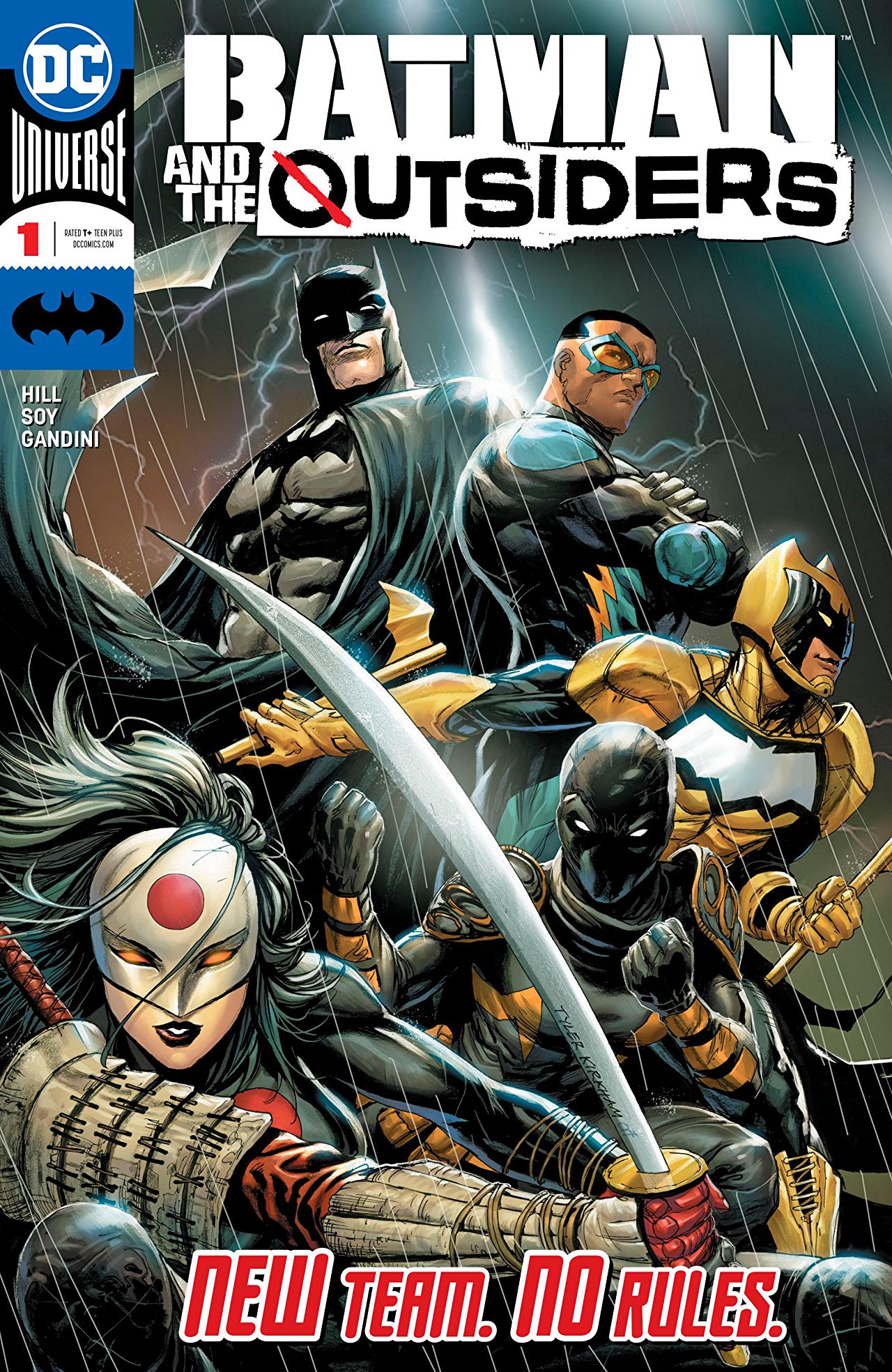 Overview: Batman gives the Outsiders their first mission.  Meanwhile, a young girl is on the run, but may be getting help from an unforeseen source.

Synopsis (spoilers ahead): A girl and her father drive down an LA highway when they are attacked by a metahuman.  He kills the girl’s father and throws her over the overpass onto a gas tanker below.  She survives the explosion and walks away.

In Gotham, Signal and Orphan are under attack by someone named Saint John.  Signal wants to rush the villain and not wait for back up, but before he can, Black Lightning and Katana finish him off.  Black Lighting gently chastises Signal for not sticking to the plan.  Signal gives some attitude but eventually relents.  Orphan says he hasn’t been the same since Karma.

Later that night, Jefferson meets with Bruce at a penthouse in Gotham.  Jefferson continues to wonder about Bruce’s motives for putting the team together and appointing him leader.  Bruce says that the team will do better with Jefferson and tells him the penthouse is now his.

Batman goes over evidence in the Batcave.  The victim in the murder in LA was named Gabriel Ramos and his daughter is named Sofia.

Jefferson stops by Tatsu’s place for advice.  She asks him to spar with her.  Jefferson obliges and Katana gives him her assessment of the team.  Jefferson tells her that she doesn’t need a leader and he needs a partner to challenge him.  He assures her that he is fully committed to the team and leaves.  After he leaves, Tatsu hears a voice emanating from her sword.

Cassandra takes Duke for a motorbike ride but he asks her to stop because he experiences PTSD symptoms from his fight with Karma.  They receive an alert from Batman and go to meet him.

Batman explains that he had promised the Ramos family protection after their troubles with something called the Ark Program.  It was a program funded by billionaires to create their own metahumans.  He explains that Sofia’s healing abilities are tied to pain but that she can die.  Batman tasks the Outsiders with finding Sofia and bringing her to Gotham.  After Batman leaves, the Outsiders agree to take on the task.

Elsewhere, Sofia tries to buy a train ticket to St. Louis when she is ambushed by someone.  The person’s name is Kaliber and he explains that he’s from the future and there to help her because she is being hunted by Ra’s al Ghul.

Analysis: The inaugural issue of this ongoing series builds off Hill’s short, but good run in Detective Comics last summer.  The plot centers around a girl, Sofia Ramos, who has a mysterious connection to the nefarious Ark Project.  While we still have to learn more about her, it’s clear she plays a pivotal role in a future timeline.  The Ark Project itself, and the villainous cabal of billionaires behind it, is the perfect antagonist for a Batman book.  I definitely got some great Young Justice vibes from this portion of the plot.

Hill always does a great job thinking meticulously about the story he wants to tell as well as getting into the minds of the characters he uses.  It’s very clear from this issue, just as it was in Detective Comics, that Hill understands these characters and how they should work together.  Jefferson is the reluctant mentor to a group that is struggling with their own challenges.  Duke clearly exhibits signs of PTSD from the incident with Karma.  I’m looking forward to finding out how he navigates this and how Jefferson tries to connect with him.  I like that Katana and Black Lightning are going to operate more like partners on this team where they can both hold each other accountable.  Cassandra seems to be the steadiest member of the group right now, but she also has to confront ghosts from her past from time to time.  Going forward, there’s potential for tension between Batman and the team given the former’s tendency to divulge information on a need to know basis.  The specter of Ra’s al Ghul also looms large as I imagine he has some connection to the Ark Project and some reason to hunt for Sofia.

I’ve been a big fan of Dexter Soy and Veronica Gandini’s art since their time on Red Hood and the Outlaws.  Soy’s art style combines aspects from manga with some aspects from the typical DC house style to create a blend that is unique and a pleasure to read.  Gandini’s colors are the perfect complement to Soy’s art.  The range is incredible; from bright colors full of energy during dynamic action scenes, to the somber shadows seen in the panels where Batman and Katana are deep in thought on their own.  The way everything is depicted just feels very cool and epic as any Batman book should be.

Final Thoughts: A spectacular introduction to what should be a stellar ongoing series brought to you by a very talented team of creators.