Review: Batman and the Outsiders #2 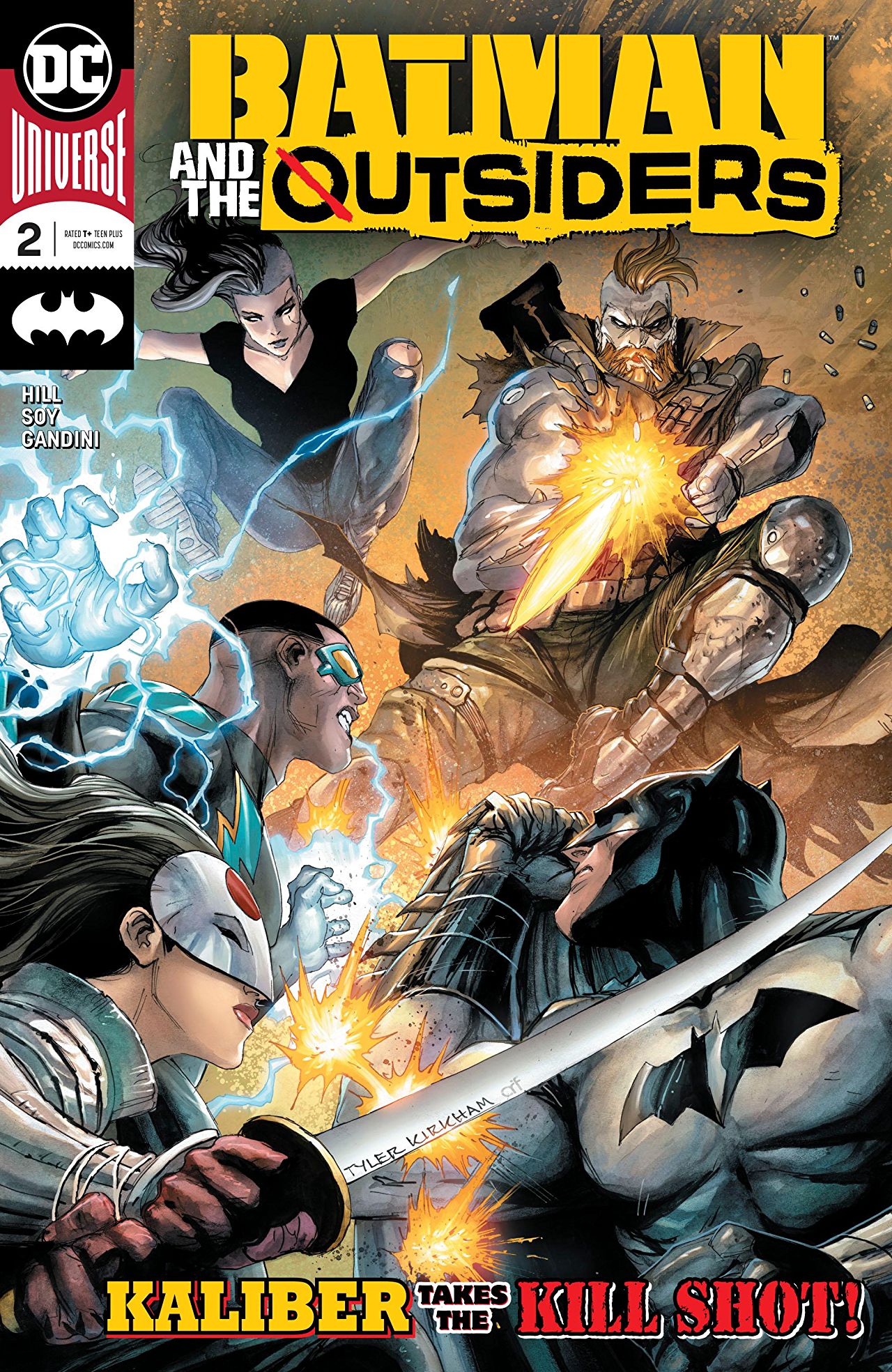 Overview: The Outsiders race against Ishmael to get to Sofia. Meanwhile Kaliber does his best to buy them time.

Synopsis (spoilers ahead):  Bruce and Jefferson are in the Batcave as Bruce gives Jefferson a briefing for the upcoming mission.  He explains that Sofia is just outside LA and being protected by Kaliber.  Bruce says that he has a plane that can take the Outsiders to LA in five hours and they need to be ready for war as they are not the only people tracking Sofia.

At an isolated house, Kaliber explains to Sofia that he’s not really from the future but that Ra’s al Ghul is really hunting her.  Sofia outlines her powers and her dream of becoming a doctor.  Kaliber explains that he came into contact with Batman when Batman helped him find his way.  He also explains that Ishmael is also from the Ark Project, uses his powers to feed off metahumans and is an agent of Ra’s al Ghul.  Sofia retires for the night and Kaliber reluctantly lends her a gun for her protection.

Ishmael meditates in the desert and calls Ra’s to tell him that he has found Sofia.

Sofia sits on her bed and contemplates using the gun for suicide when Ishmael crashes into her room.  Kaliber bursts into the room and starts firing at Ishmael.  Sofia flees initially, but then turns around to return with determination in her eyes.  Ishmael and Kaliber continue to trade blows and Sofia body checks Ishmael from behind as he’s about to land a big blow on Kaliber.  Ishmael recovers quickly and subdues Kaliber before advancing on Sofia.  His advance is halted by Katana who appears out of nowhere and tells Sofia to get behind the rest of the Outsiders.  They all try and fight Ishmael, Kaliber even managing to recover to shoot Ishmael’s arm off, but ultimately Ishmael is too much for them.  He rises up in the sky and emits a blinding light that knocks everyone out.  He appears to regrow his arm as he asks Sofia to come with him.  By the time the Outsiders regain consciousness, Ishmael has taken Sofia and gone.

Eighteen hours later in Khadym, Sofia awakens in a well-furnished room to find Ra’s al Ghul enumerating the many people who have failed her and reassuring her that she is now safe.  He says he is her teacher now and that she has much to learn.

Analysis:  An action-packed issue to follow up the great set up in the first issue.  But first, we start off with Bruce briefing Jefferson in the Batcave.  I liked this interaction because it strikes a balance between Bruce showing incredible respect for Jefferson as a peer while also showcasing Jefferson’s willingness to learn more about Bruce by picking his brain.  It confirms that this is a true partnership and one that will continue to evolve going forward.

The story transitions to Kaliber and Sofia talking and this feels like the calm before the storm or the deep breath before the plunge underwater.  There’s an elevated level of tension and anticipation where the reader is just waiting for all hell to break loose.  The conversation between Kaliber and Sofia is also important because it fills in a few plot points about Ishmael’s origin and because it allows the reader to connect to Kaliber and Sofia.  Kaliber gives off the air of someone trying to atone for a past life.  Sofia’s desire to become a doctor is so normal and worthwhile that we can’t help but feel even more sorry for her that all this has happened.  The scene afterwards where she appears to contemplate giving up and committing suicide takes on an extra layer of sadness because she was just talking about her dreams for the future.  She eventually shows her toughness later on when she first flees the fight but then returns to save Kaliber from Ishmael.

The fight itself is everything you want from an action sequence in a comic book.  The action just leaps off the page.  Every panel thrums with energy.  It’s bold, striking colors combined with characters depicted as unstoppable forces of motion and athleticism.  Every moment and strike in the fight has an epic quality that highlights just how skillful and deadly these characters are.  The art team deserves a lot of credit for this and that’s not surprising because this art team was amazing in the first issue as well.  It made me buy into the story in a whole different way.  For example, take the page where Ishmael is kneeling in the desert on some type of sigil.  Normally I would have been thinking stupid questions about why he dragged a bunch of candles into a desert.  But the art is so good that I instead start thinking about how cool it looks and wondering about the kind of ritual being performed and what the sigil could possibly mean.

My only criticism of this issue is that I felt the fight gets resolved a little too conveniently.  Aside from that, this was an excellent follow-up issue in every aspect.

Final Thoughts:  A spectacular issue with beautiful art that delivers action in the best way the comics medium can offer. This is definitely one to pick up.