Review: Batman and the Outsiders #3 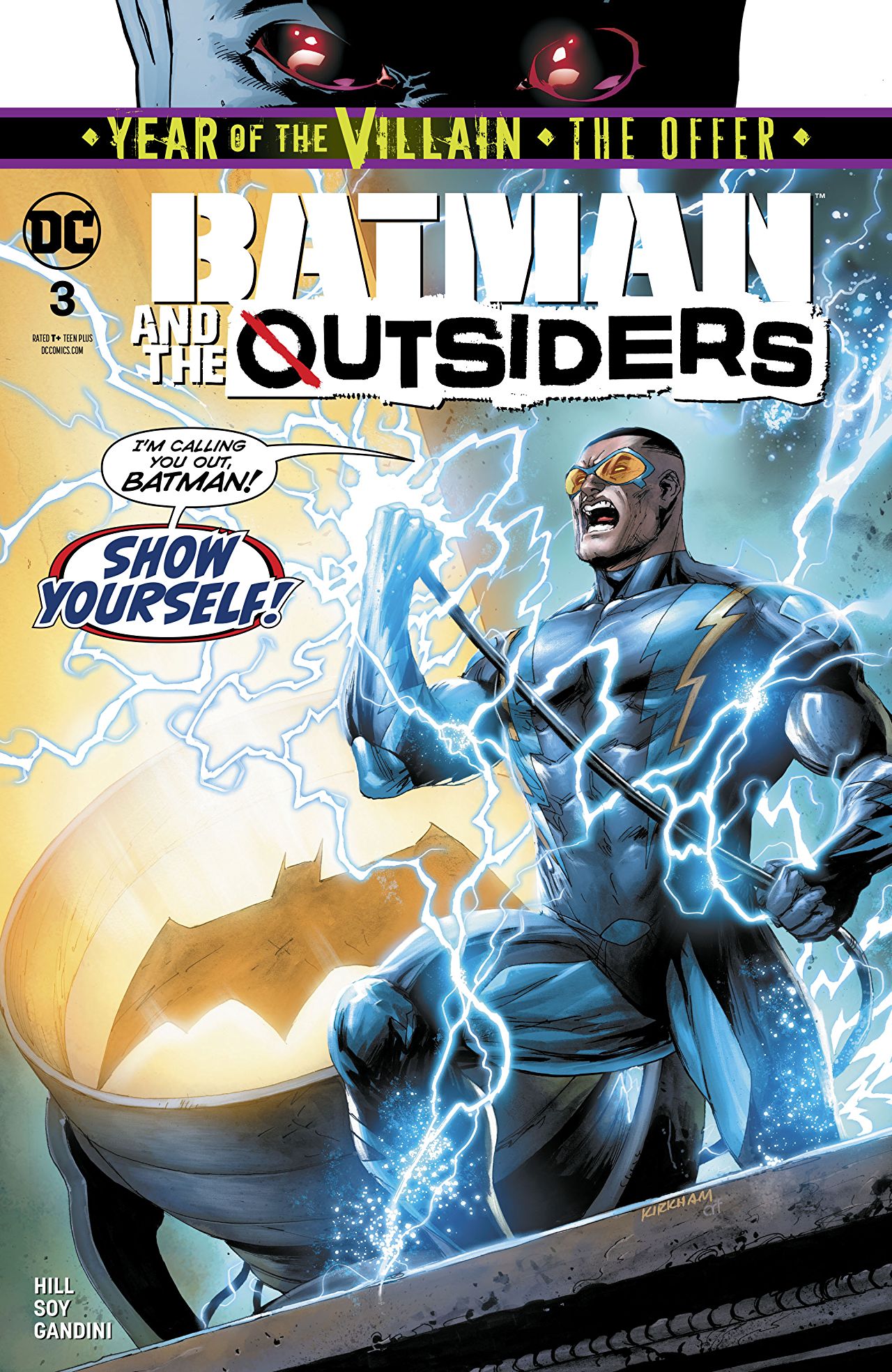 Overview: Batman tries to get the Outsiders to become more cohesive through a training exercise.  Meanwhile, Ra’s al Ghul tries to turn Sofia to the “dark side” through his own version of training.

Synopsis (spoilers ahead): Batman decides that the Outsiders need a training exercise to make them a more cohesive unit so they can be more successful in accomplishing their objectives in the future.  He tells them they will be fighting him at the waterway in three hours.

Sofia is in a trance-like state between consciousness and unconsciousness as Ra’s al Ghul tries to get her to give in to her darker impulses.  Sofia resists and screams in anger how much she hates him.  Ra’s al Ghul continues talking and tries to get Sofia to kill Ishmael.  Sofia doesn’t want to do it but Ishmael taunts her about killing her father causing Sofia to punch him to Ra’s al Ghul’s delight.

Back at the Gotham waterways, the Outsiders arrive and try and figure out what Batman has planned for them.  Black Lightning gives instructions and Signal gives attitude.  As they all split up, a minor explosion isolates Duke from the rest of the team.  The villain known as Karma appears and Duke tries to fight him one on one.  Karma taunts Duke that he’s alone as they fight.  Orphan comes out of nowhere to knock Karma back, while Katana and Kaliber finish the job.  Black Lightning is there to pick Duke up and reassure him that he’s not alone.  Karma removes his helmet to reveal that it’s just Bruce in disguise and says he is proud of Duke.  Cassandra tells Duke that she told Bruce about Duke’s PTSD and they hug as Duke admits to needing help.

Elsewhere, Sofia is giving in to her anger and beating up Ishmael.  Ra’s al Ghul hands her a sword and tells her to kill her past by killing Ishmael.  Sofia appears to be bringing down the sword to kill Ishmael when Ra’s al Ghul commands Ishmael to wake Sofia.  Ra’s al Ghul reiterates that Sofia is a killer deep down and that he is the only one who will accept her.  He asks that she dedicate herself to his service because he has “seen the future”.

In a flashback, we see Luthor have a conversation with Ra’s al Ghul via a drone.  He says he has an offer for him.

Analysis: The focus of this issue for me is the contrast in mentorship styles between Batman and Ra’s al Ghul.  Both the scenes take place parallel to each other and we see how both these characters shape people around them.  And for all the differences between the two, there are also a few similarities.  Both of them adopt a strategy of breaking down the subject.  The difference is Batman does it to give Duke the confidence and security of knowing he is part of a team, but Ra’s al Ghul does it to break Sofia’s independence and bend her to his will.

The “training exercise” for the Outsiders was very much needed as the team hasn’t really been functioning to their potential.  I like that it focused on Duke’s problems because, while everyone on the team has their own challenges, Duke is the only member of the team that doesn’t have the right attitude.  He’s consistently been abrasive and confrontational and this stems from him feeling like he has to go through what he’s dealing with alone.  Furthermore, his issues could result in him or others on the team being hurt in the field.  It was nice to see everyone rally around him and reassure him that he isn’t alone.  The moment he has with Cassandra really pulls at the heartstrings.  But that being said, I’m not sure how much a single training exercise will go towards solving his problems permanently.  It is definitely the first step though.  The one thing I didn’t like as much about this is that Batman tells them that they will be fighting him at the waterways.  I think I would have enjoyed the fight more if he simply said they’d find an enemy there.  Because when I saw Karma emerge from the smoke, there was no doubt in my mind that it was Bruce in disguise.

Given all the preparation the Outsiders need, I wonder if they will be too late to save Sofia.  She appears to be a strong character, but Ra’s al Ghul has a way of twisting people’s minds so they view the world from his perspective.  I thought it interesting how much Sofia’s choice with the sword paralleled Bruce’s choice from Batman Begins as well as the choice Bruce made when becoming Batman in general in the comics.  The path of revenge is easy and tempting, but justice is about more than that.  The part at the end with Luthor seems tacked on and superfluous to the compelling story being told here.  This is just me speculating wildly here, so I could be very wrong about this, but it feels like editorial insisted this scene be included so that the book would feel as if it was part of the line-wide event.  And honestly, nothing really happens because Luthor never says anything other than a dramatic hello.  Perhaps we will see this thread explored more in subsequent issues.

The art continues to be simply outstanding.  In reviewing this series every month, I have run out of superlatives and adjectives to describe how much I enjoy Soy and Gandini’s work.  We’ve seen them be great with action scenes in the past two issues, but here they get a chance to be really creative with Sofia’s trance-like state.  The use of the dragon and framing the panels of her and Ra’s al Ghul were excellent in my opinion.  Outstanding work as always.

Final Thoughts: Pick up this issue if you ever wanted to see Bruce wear black nail polish.  Kidding! It’s a good issue that explores the leadership styles of Ra’s al Ghul and Batman while diving into some of the problems the Outsiders are grappling with.  All beautifully showcased by one of the best art teams in all of comics.