Review: Batman and the Outsiders #4 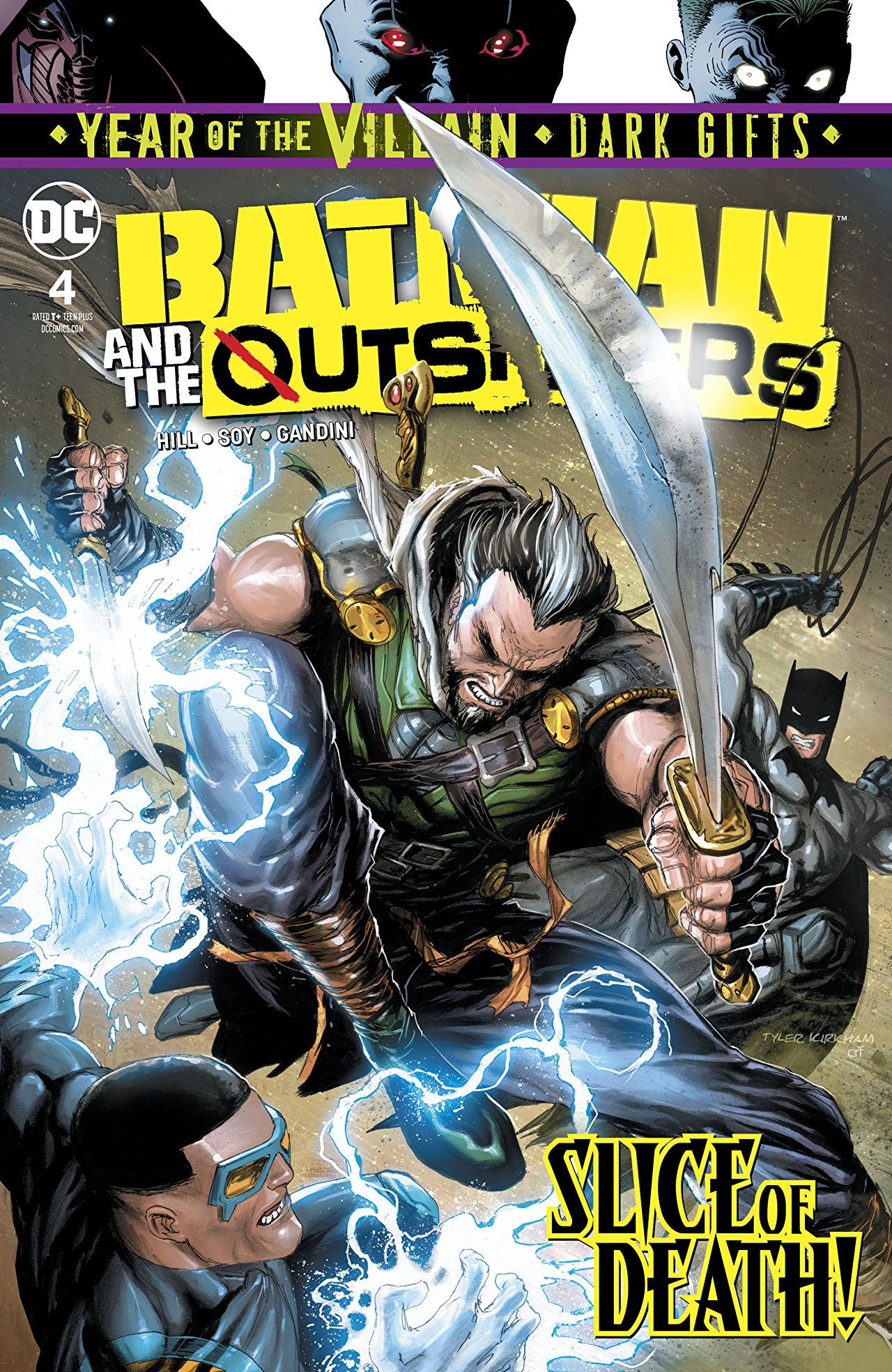 Overview: The Outsiders gear up and craft a plan to retrieve Sofia from Khadym.  Meanwhile, Ra’s al Ghul continues to indoctrinate Sofia.

Synopsis (spoilers ahead): Ra’s al Ghul pontificates on the meaning of purpose and identity as Sofia puts on her new armor.

Back in Gotham, Cass talks to Duke about helping him with his fear.  Black Lightning tries to get a measure of who Kaliber is.  Kaliber seems a bit standoffish, but tells Black Lightning they are on the same side.

Tatsu meditates on a rooftop where she sees her husband being held by demons in the dimension contained in her sword.

Bruce invites Jefferson to his cruise ship so they can discuss where the team is at mentally before going into Khadym.  Bruce explains that he can’t go himself because he’s dealing with personal issues and needs help.  Bruce doesn’t want Duke to go either, but Jefferson explains that he’s already ahead of Bruce in helping Duke deal with his problems because he’s already talked to Cass about working with Duke.

Katana, Black Lightning, and Kaliber convene in the Batcave for a debrief with Batman.  He explains that they’ll have to enter Khadym undercover.  Kaliber explains that he has created fake identities for the two of them and that he will be serving as “overwatch” on the operation.  Black Lightning asks Batman to consider the possibility that Sofia won’t want to leave and Batman says that if they can be convincing enough, he can deal with whatever of Ra’s al Ghul’s influence is left once Sofia is back in Gotham.

A few moments later, in a private conversation, Black Lightning tries to get Katana to open up about what is bothering her.  She explains her visions of her husband from her meditations.  Katana agrees to let him help her, but only after they’ve retrieved Sofia from Khadym.

In Khadym, Ra’s al Ghul puts Sofia through a gauntlet of deadly fights to prove herself and earn a new identity.

Analysis: Batman and the Outsiders continues to be an absolute pleasure to read and review every month.  This latest issue is almost entirely devoid of action (which is neither inherently good or bad) and takes the time to really build up these characters and the team dynamic between the Outsiders.  While we see some members on the team struggle with their inner demons, we also see other members of the team picking them up.  Cass working with Duke to overcome his fear and Tatsu agreeing to let Jefferson help figure out what’s happening with her husband are engaging side plots that will be very interesting to see unfold.  We see some development on what happened in previous issues with Duke learning to accept Jefferson as the team leader and losing the negative attitude.  But perhaps the best dynamic in this issue is the one between Bruce and Jefferson and their different management styles.  The discussion they have on the cruise ship is short but really shows the differences in their philosophy.  The way they end their conversation, talking about standing next to people versus standing on rooftops, distills so much of who they are down to a few sentences and shows that both styles are different but also just as valuable.

At first I thought it was a bit quick for Sofia to start embracing Ra’s al Ghul’s teachings, especially after being somewhat defiant when she first got there, but then I realized the timeline is a bit ambiguous as the lessons could be happening over the days it takes the Outsiders to prepare and travel to Khadym.  Ra’s al Ghul is a very persuasive person and the lack of speech from Sofia in this issue means it’s a mystery if she is really buying his teaching or just going along with it to stay alive.  Kaliber is the other wild card and keeps making vague hints to a past he’s ashamed of as well as why Batman decided he deserves a second chance.  I don’t know if it will come up in this arc, but perhaps it might come back to haunt him at an inopportune time in the upcoming mission.  In any case, the Mission Impossible-style infiltration of Khadym will be exciting.

The art is again outstanding.  While I’ve mentioned in the past that Soy is amazing with action scenes, this issue also gave him a chance to show why he’s also amazing with more quieter moments.  The conversations feel all the more real not only because you can see real emotion in the characters’ eyes, but also because the environments are creative and detailed.  The way everything in the panels is framed really feels like a slick spy thriller.  Gandini’s colors also really set the mood for the scenes, from the dark purples of melancholy sadness of Katana meditating on a rooftop to the golden shine and blue sky at Bruce’s yacht.  I also really loved the design of Sofia’s new outfit.  It’s functional and stylish and fits in with the League of Assassins aesthetic.

Final Thoughts: An outstanding issue that really builds up to what should be an action-packed conclusion to the first arc.