Review: Batman and the Outsiders #5 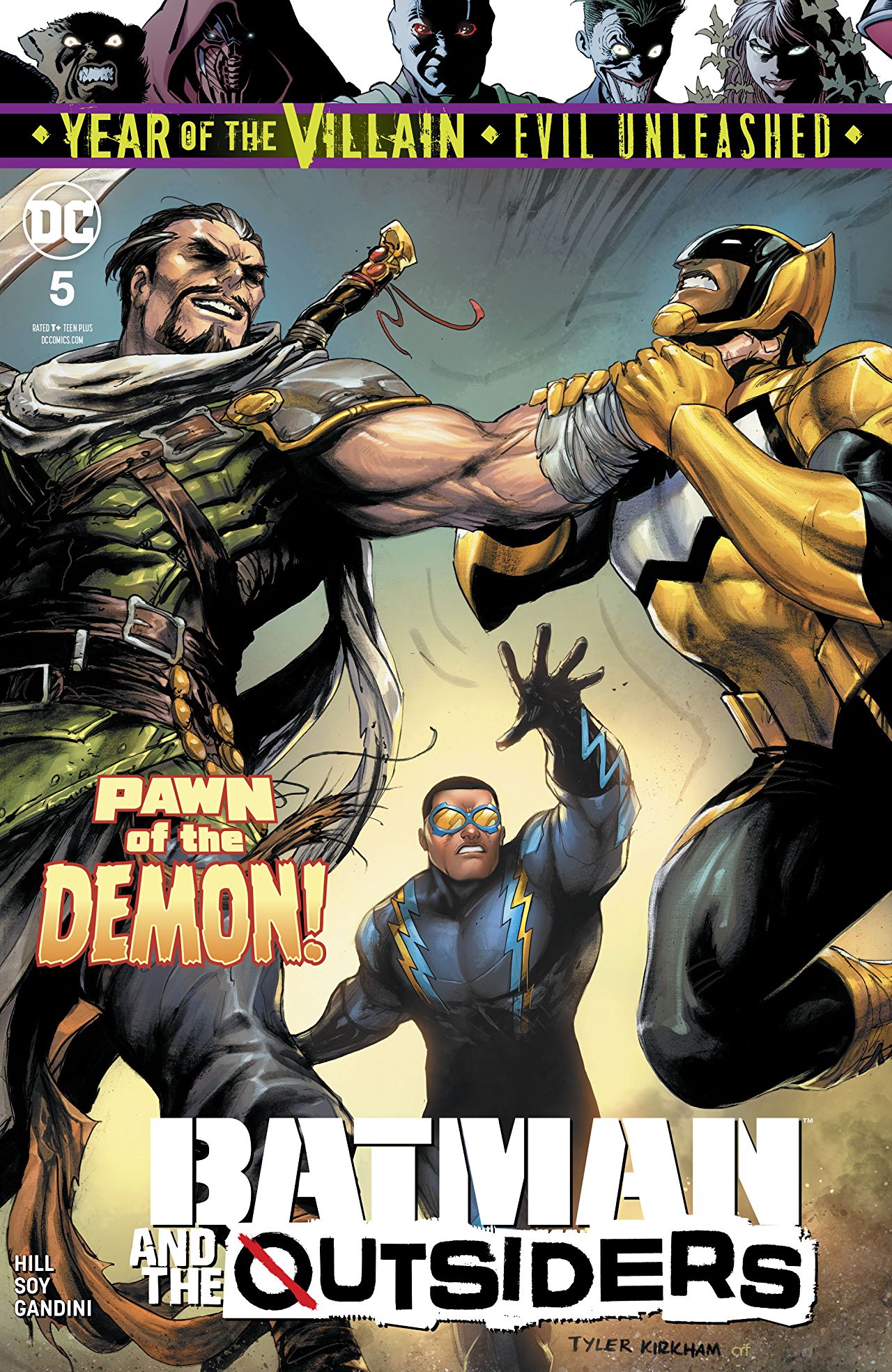 Synopsis (spoilers ahead): Jefferson and Tatsu bribe their way into Khadym and find accommodations while they wait for Kaliber’s signal that he’s found Sofia.  While they wait, Tatsu tries to explain to Jefferson how it feels to be in a situation where he could take a life.  Jefferson’s meditation is interrupted by Kaliber’s signal.  He has found Sofia waiting in the desert but indicates that it’s almost certainly a trap given that their covers were blown as soon as they entered Khadym.

Jefferson and Tatsu try talking to Sofia but she appears angry and drugged.  She tries to fight them as other assailants emerge from the ground and environment around them.  Jefferson keeps the assailants at bay while Tatsu fights Sofia.  Sofia is stronger, but her clouded mental state results in Tatsu beating her easily.  Kaliber goes against Batman’s orders and kills his assailants, but Tatsu and Jefferson do not see this.  As Tatsu helps Sofia up, Jefferson wonders where Ishmael is.

Elsewhere, Ishmael ambushes Orphan and Signal.  He says that Batman has failed them and promises to show them how.

Analysis: Because this issue focused on action and getting Sofia, not a whole lot else happens in terms of plot.  It’s really fast-paced with no wasted time or space on the page.  That being said, there is an interesting moment early on between Jefferson and Tatsu.  In a very quick exercise, she gets him to understand the decisions she has made in her life and think about what he would do in similar situations.  We never find out what Jefferson chooses so it could be something that comes back around in subsequent issues.  I like that Jefferson and Tatsu seem to have a healthy respect for each other despite their differences.  Jefferson doesn’t have an ego when it comes to being willing to learn from her and she is willing to trust him and ask for help with her problems as we’ve seen in past issues.

The action itself is full of raw energy and power.  While the setup is fairly straightforward, Soy manages to make each panel seem alive and full of movement.  Gandini does a good job making Jefferson look absolutely epic in the panel where his fists are lit up against the night sky.  The action will have you feeling like you’re on the edge of your seat even if the conclusion is a bit anti-climactic.  I did feel like there would be a twist, but I suspect that might be coming in the next issue.  Overall, great art throughout.

Looking ahead, I suspect we will see more fallout from Kaliber’s decision to use lethal force.  I also imagine we will see Sofia struggle with whatever Ra’s al Ghul did to her mind.  How the Outsiders help her while also trying to protect her and themselves will be worth watching.  And lest anyone forget, Duke and Cass are going to fight Ishmael.  I’m interested to find out why he thinks Batman is their enemy.  The one thing I thought was a little strange was Signal telling Orphan to get behind him when Ishmael attacked.  I get that he may have been reacting instinctually, but Cass is the far superior fighter so it was weird to see him try to take point especially with everything he has been going through lately.  I do hope we see Cass showcase her skills in the next issue.

Final Thoughts: Intense action and a few good character moments help push the story forward.  Definitely an issue to pick up if you’ve been following this story and/or if you like great art.