Review: Batman and The Outsiders Annual #1 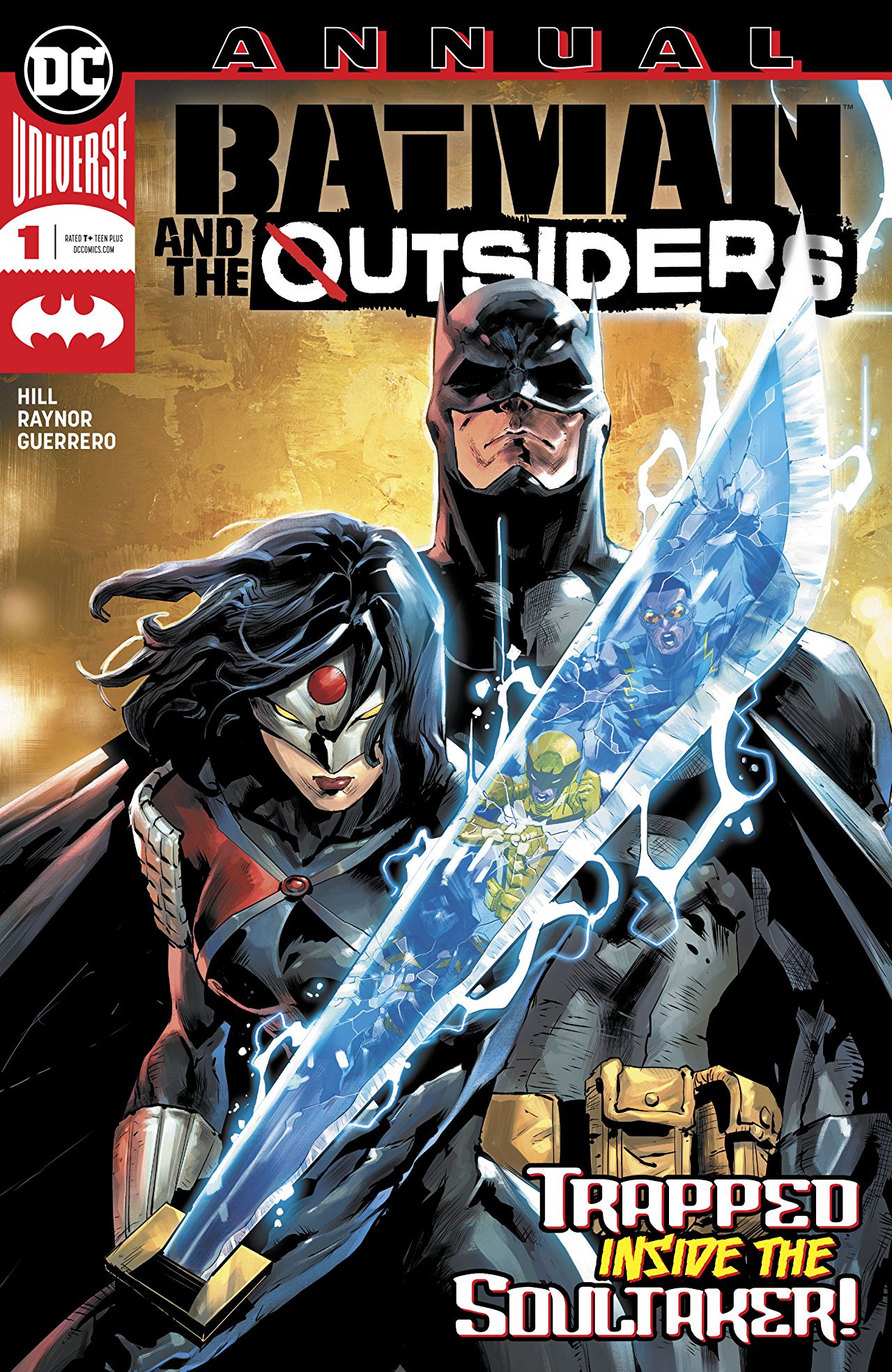 Overview: Katana enlists Black Lightning’s help and journeys into the Soultaker Sword to alleviate the suffering of her husband Maseo.

Synopsis (spoilers ahead): The story opens with Tatsu telling Jefferson a story of her ancestor Miyako and her battle against a force of evil named Tsutomo.  The story ends with Miyako defeating Tsutomo and “sending him to darkness”.  Tsutomo resides within the sword and is trying to get revenge on Tatsu and her ancestor through hurting Maseo.

Tatsu takes Jefferson to see her “sister”, a lifelong criminal named Eiko, to ask for help with Maseo.  Eiko explains that Maseo will suffer until Tatsu finishes what Miyako has started.  She also explains that Tatsu has to die in order to help Maseo.  Tatsu confirms that she already knew this and they leave Eiko.  Tatsu tells Jefferson he doesn’t have to help her any further but he insists on sticking around.

Inside the Soultaker dimension, Tsutomo tortures Maseo and tells him he needs his pain to draw Tatsu to him.

On a rooftop, Katana and Black Lightning have a short conversation in which Katana reveals that her ancestor went insane when she banished Tsutomo.  She also reveals that part of her wants to die but not right now as she plunges her sword into her own body.  She tells Black Lightning to protect her body and that she will return if she is successful.

As Katana enters the spectral Soultaker dimension, she meets her ancestor Miyako.  Meanwhile Black Lightning attempts to protect Katana’s physical body from Tsutomo’s shadow minions in the real world.  Katana initially does not want to give in to the power as she fights Tsutomo’s army in the Soultaker dimension.  But as she is being slowly beaten, she begins to accept the voice of Miyako and gains the power to easily defeat her opponents.  She faces off with Tsutomo himself and decapitates him.  She shares a kiss with the relieved Maseo but says she can’t stay.

In the real world, Black Lightning has been barely able to hold the shades at bay, but Katana returns and is easily able to beat them with the Soultaker Sword.  She thanks him for his help, tells him she is scared because the voice is still with her and she says she needs a voice she can trust.  Black Lightning says she can trust him and they share a hug on the rooftop.

Analysis:  The annual takes a break from the ongoing storyline with Ra’s Al Ghul to delve into the issues we’ve seen Katana dealing with from the start of the series.  This story is really a story about Tatsu, her past, the people that are important to her and her personal struggles every day.  I really enjoyed the dynamic between Katana and Jefferson.  Their interactions feel so genuine and pure; it’s just two people being honest and sharing stuff that is deeply personal with no ulterior motives.  The way Jefferson acts in the issue is also a great example of how to offer help to someone on their terms instead of trying to control things and do it your way.  Tatsu also doesn’t hold back and confesses her fears as well as how she sometimes feels like wanting to die.  Hill’s script treats all these topics in a very sensitive and artistic manner.  It’s refreshing to see conversations like this happen in comics because too often we see conversations with characters being less than honest or holding back for whatever reason.

Despite being born in Japan, I’m not well versed enough in Japanese history or mythology to know if the story about Miyako and Tsutomo is something that is well-grounded in Japanese myth but I enjoyed it nevertheless.  It lends more weight and provides a history to Tastu’s character which makes her more interesting to the reader.  The art was really important in telling this story visually because it conveyed a sense of grandeur to the battles against Tsutomo.  This is very much consistent with the work throughout the rest of the issue.  The city in modern-day Japan feels authentic with the glow from the signs and the number of people on the street.  The Soultaker dimension also has this ethereal aesthetic with the melancholy pink that really works well.  I would also be remiss if I didn’t mention how cool and well-structured all the fight scenes looked.  Raynor’s art is really good and Guerrero’s colors really complement and elevate it even further.  There does appear to be a small lettering error in the conversation with Eiko.  There’s a panel where she is referring to Jefferson as “more noble company” but the speech bubble seems to indicate that Jefferson is saying that about himself which doesn’t make sense.  It’s not something that detracts from the issue at all, but it is something to change for the collected edition.

Final Thoughts:  A really strong issue with awesome art that explores Tatsu’s character and builds on her relationship with Jefferson.  Definitely one to pick up if you have been reading this series or are a fan of Katana or Black Lightning.