Review: Batman and the Outsiders #7 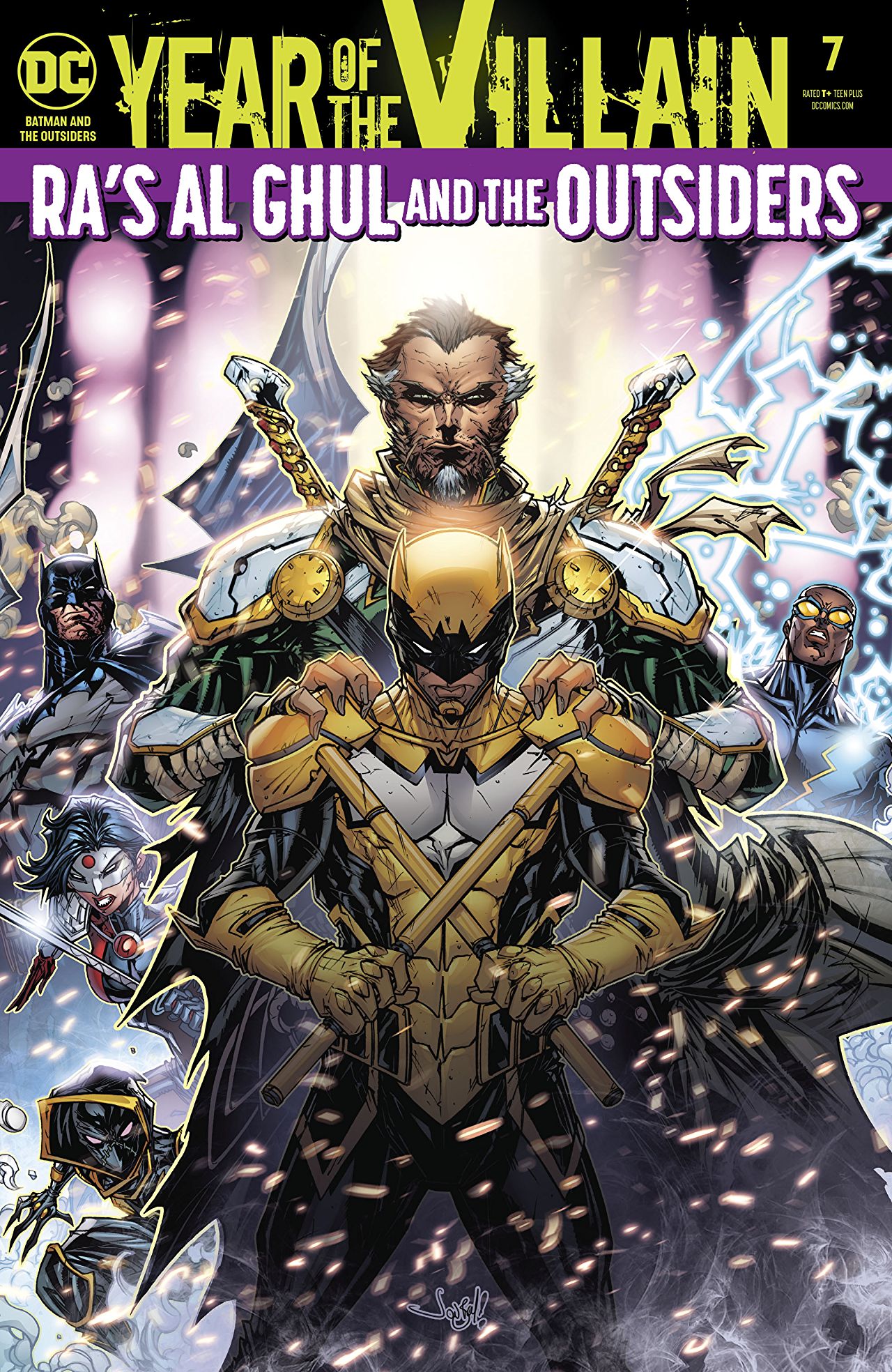 Overview: Black Lightning and Katana experience an unexpected twist on their flight escorting Sofia back to Gotham.  Meanwhile, Orphan tries to track down Duke but it may already be too late.

Synopsis (spoilers ahead): Ishmael tells a captive Duke about his personal history with Ra’s al Ghul.  He tells Duke he has evolved him to serve Ra’s al Ghul.

On the plane back to Gotham, Katana explains to a handcuffed Sofia that she isn’t a prisoner and is being taken back to Gotham to see Batman.  Sofia isn’t happy about it but seems to accept it.  Black Lightning and Katana have a private discussion about the merits of bringing Sofia back to see Batman.

In Gotham, Orphan races through the streets searching for Duke while she talks to Batman who is on his way back to Gotham.  Batman’s surveillance system locates Duke and he relays the location to Orphan.  Batman tells her to wait for him but she declines and he wishes her luck.

Back in the plane, Sofia has flashbacks to Ra’s al Ghul’s lessons and breaks free of her handcuffs.  She takes the sword from a sleeping Katana and holds it up to kill her but she also seems conflicted about it.  Black Lightning catches her before she can stab Katana and Katana wakes up.  Kaliber puts a gun to Black Lightning’s head from behind him and reveals he was working for Ra’s Al Ghul the whole time.

On the streets of Gotham, Orphan breaks into the truck carrying Duke and finds Ishmael waiting for her.  They fight and Cass manages to beat him and stick to her code despite his goading to get her to kill him.  She manages to pull Duke out of the truck before it crashes but she quickly realizes that he has been changed.  Duke tells her that he can’t see the light anymore and can only see darkness.

In the sky above Gotham, Katana knocks the sword out of Sofia’s hand to break the standoff.  Kaliber throws an explosive at the plane’s controls and tells Black Lightning that the Demon can bring them all back if they die as the plane starts to go down.

Analysis: Before I share my thoughts on this issue, I want to acknowledge a small error in my previous review.  I incorrectly thought that Duke and Cassandra had gone to Khadym with the rest of the team and I was, therefore, wondering why Black Lightning was leaving without them.  While I still believe he should have tried contacting them when he wondered where Ishmael was, it’s not as big of an oversight as leaving half your team in Khadym.  My apologies to our readers and the creative team for that.

This issue gives us a great unexpected twist and a ton of action that will get your pulse racing.  Kaliber revealing himself as a double agent was a complete surprise.  I actually went back through the previous issues to go through all the scenes he was in to check if there was any indication he was secretly working for Ra’s al Ghul.  What I found was that the twist was well set up from an emotional standpoint as Kaliber was positioned as a character with a redemption arc.  I also think that if Kaliber was indeed working for Ra’s al Ghul before he met the Outsiders, then he had plenty of opportunities to fulfill Ra’s al Ghul’s plans before now.  For me, it doesn’t really make sense that he would pick the moment when they are in a plane above Gotham to reveal he is a double agent.  The only plausible explanation I can think of is he’s a triple agent or that he’s “unstable” as Bruce described him in an earlier issue.  I feel like there’s more to this that will be unpacked in the next issue.

One of the really powerful moments in this issue was Cassandra fighting Ishmael.  In issue #6, she was beaten by Lady Shiva and constantly taunted for holding back.  Lady Shiva was telling her that her association with Batman and his code has made her weak.  She’s clearly angry after that fight because she lost and her friend was taken.  In this issue, we see her perfectly balance her rage and focus on remembering who she is.  She refuses to respond to Ishmael’s taunts and focuses on winning the fight in a methodical manner.  It was great to see her believe that her way will work and for it to actually happen.  It was also cool to see Batman trust her even when she disobeyed his direct order.  Batman typically doesn’t take kindly do this, and the fact that he responded how he did with Cassandra shows that her abilities are held in high esteem.

I’m not familiar with the art team for this issue, but I think they did a good job with everything.  As I’ve said before, this issue has a lot of action and has that same raw energy found in other issues in this series.  The art is particularly good during Cassandra’s high-speed chase and the fight with Ishmael where Lucas’ colors are the perfect compliment.  There is a tiny lettering error on the page where Batman is talking to Orphan where the word “something” is misspelled, but it’s not a big deal.