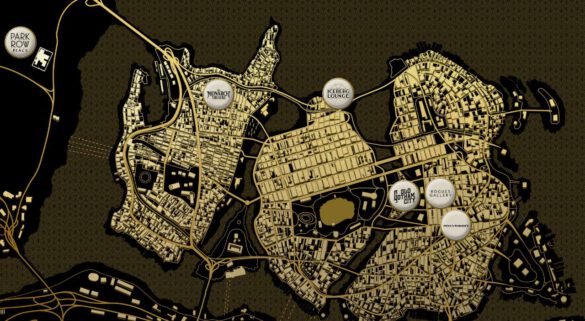 If you are in the London area, there is a brand new high-end themed experience based on the Batman Universe called Park Row. Park Row has officially opened to the public and includes five spaces intended on telling stories and focusing on first-class dining. Each space has there own signature style for food, drinks, and environment. Here is a breakdown of the different areas.

Pennyworth’s is named after the Wayne family butler and features a restaurant and bar paying homage to the Wayne Mansion. The featured cocktails are whiskey focused including a rare bottling called Inishtree, named after the Scottish town where Castle Wayne is located.

The Iceberg Lounge is themed around one of the most well-known comic locations in Gotham City for cocktails. With unique decor themed around the Penguin, the restaurant offers fresh seafood as well as featuring live entertainment from Black Canary Thursdays through Saturdays.

The Rogues Gallery is a museum of sorts with art pieces showcasing the villains of Gotham City. The restaurant offers culinary masterpieces, while the drink menu features drinks that are named based on hints of which characters they reference.

Old Gotham City (opening in September) is the late-night no-reservations bar discreetly hidden away as a speakeasy. Multiple drinks are served along with smaller food options like lobster rolls and fried chicken.

Rounding out the offerings, Amusement Mile steps away from the standard restaurant idea with smaller snacks like popcorn and edible balloons.  There is also the Monarch Theatre, which is a twenty-seat venue serving an eleven-course menu. The meal is served as a culinary show of sorts with food and digital projections.

The entire venue will have Bat-Fans taking in all of the details with unique art and theming throughout the entire venue. Take a look at a select group of images showcasing the venue and make a reservation now by heading over to the Park Row London website.