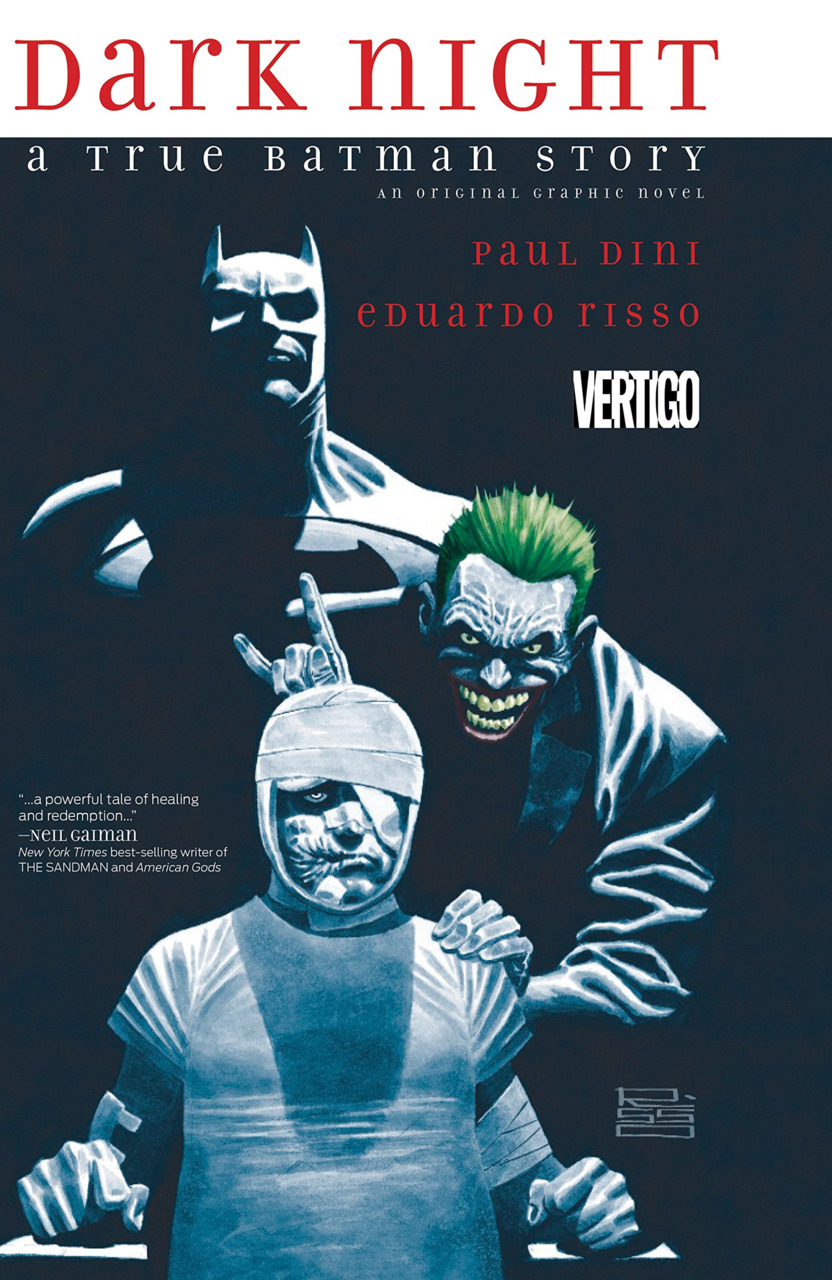 THE PLOT: Paul Dini, writer for Batman: the Animated Series, recounts a night in 1993 when he was viciously beaten and required facial surgery. Throughout the account visions of Batman and his world come into the story to comment upon Paul’s feelings on his self-worth, views on women and getting back into the world in the aftermath of his mugging.

MY THOUGHTS: Paul Dini is truly one of the icons of the Batman legacy. His works and contributions towards the character have left a lasting impact on an entire generation, and – while not traditionally a comic book writer – his name stands right next to the likes of Neal Adams and Frank Miller in the annals of time regarding those who’ve shaped the Batman mythos into a multi-dimensional and engrossing mythos. With awards, dedications and creations that have left his mark on the comics worlds for decades, it’d be safe to assume that Dini has much to feel proud about.

Not the case, as this anecdote told through the graphic novel reveals that Dini’s sense of self-worth and esteem are (or were definitely at one point) devastatingly low. While he paints as much of a three dimensional picture as he can to establish a logical thru-line for his lack of character, Paul Dini uses this story not to recall an awful event that happened to one of Bat-Fandom’s darlings but to present the duality that exists within both him and all of us. “Dark Night: A True Batman Story” is a remorseless and sobering tale of self-examination, as well as a rejection of pity.

It’s also a tale of perseverance. Dini’s vicious mugging would be enough to make anyone not want to even look at a Batman comic again, let alone write a cartoon about him. But what Dini establishes isn’t simply just a day job that occupied his time. Batman for him, like for many of us, was a part of his life. Even in failing to exist when he needed to the most for Dini, Batman was there in his private moments when he was spiritually low. As well as the Joker, Poison Ivy, Two-Face, the Penguin and a few others, Dini shows how these characters can permeate our consciousness when we want them to, sometimes when we need them to.

The story is about Paul and Paul only, so there’s not much to take away from it beyond an autobiographical account. That being said, what is most apparent is the utter self-loathing some of the best of us can have, unbeknownst to everyone around us. Comic book fans are the ripest of audiences for this type of story, as superhero comics are power fantasies and have been since the beginning of time. This book exposes one of the industry’s best as a sexist, self-interested coward who is superficial about most everything in his life. Not that this book is using its author’s real life event to take shots at the Comic fandom community exactly, but in the classic “death and rebirth” mold, Paul goes through an event that could happen to any of us, and his connection to what we all love the most ends up being a big casualty. When real life treats us at its worst, how can we go back to make-believe? In Paul’s case, perpetuating that same illusion of Batman and other cartoon characters came back to him in a thankful and appreciative way. A man in a store said his wife, wiling from cancer, had her happiest moments watching Tiny Toons cartoons. In that moment comics and cartoons are redeemed for being exactly what they are: make-believe. Paul got his groove back, but is his story too specific to identify with?

The Greek Chorus of Batman, the Joker and the rest of the villains help make the story more relatable in the way that the characterizations of these creations can reflect choices in our own life. Want to indulge in your worst personality traits? The Joker would agree with you! Are your thoughts on women changing? What would Poison Ivy say? Feeling down because of a major life setback or tragedy? What would Batman do? In these examples, the characters become the personal gods for their real world worshipers, and are made all the more real for it. Like a subjective joke or tale of tragedy, interpretation triumphs over intention.

For fans of Batman: the Animated Series, this graphic novel is an eye-opening insight into one of the series’ most valuable creative minds. Like an undressed emperor, Paul Dini is made unflinchingly real by his own words. It’s a deeply personal reflection but like the master storyteller he continues to be, the anecdote serves more than just being a navel-gazing confessional. Highly recommended.