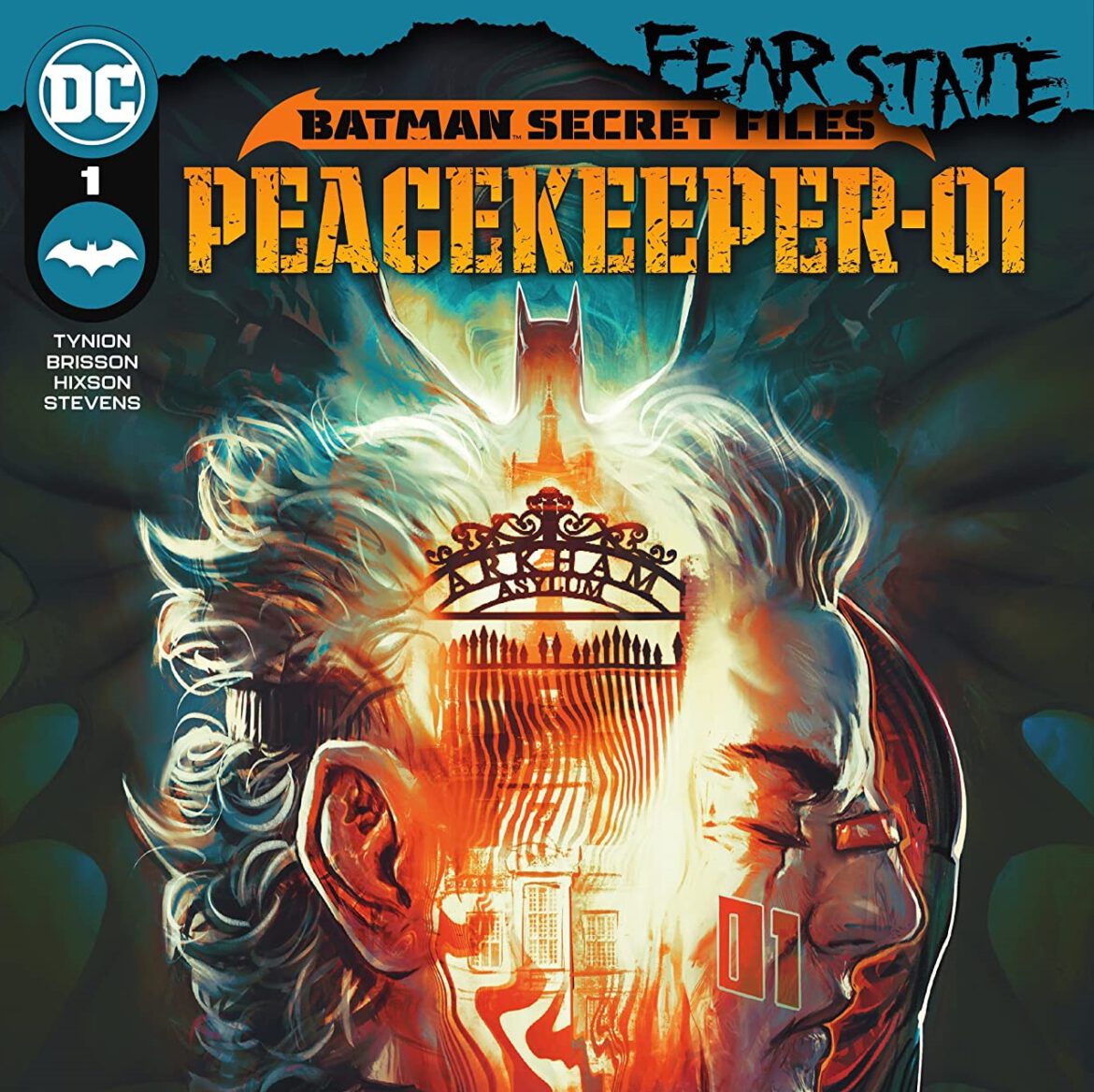 Overview: In Batman Secret Files: Peacekeeper-01 #1, we learn the origin story of Peacekeeper-01 and his family’s long-rooted history of protecting Gotham.

Synopsis (spoilers ahead): Batman Secret Files: Peacekeeper-01 #1 opens as a bridge between Batman #112 and Batman #113. Peacekeeper-01, Sean Mahoney, is running loose in Gotham. Scarecrow is in Sean’s head, preying on his fears of being a failure. Simon Saint orders Sean to return home, but Sean screams at Saint.

As Saint continues to speak calmly and rationally to Sean, informing the peacekeeper that he’s been compromised by Scarecrow, Sean stumbles to the Gotham bridge and notes a sign commemorating its construction. Suddenly, Sean is a child again, and his father is telling him how Sean’s great-great-grandfather, named Sean Mahowney, helped construct this bridge. It was commissioned by the elites of Gotham City, by the Waynes, Elliots, and Cobblepots, as a way to expand their empires. Sean’s father tells him of how his ancestor sacrificed his life to build this bridge, to help Gotham grow.

In the present, Sean hijacks a car and heads for home. This sparks another memory, one wherein a young Sean is in the backseat of his dad’s car. His dad and another man are trying to silence a witness Harvey Dent would use to take down Commissioner Loeb and other corrupt cops. Sean’s dad accidentally kills the witness, and the two grown men stuff the body in the trunk.

In the present, Sean decides that he needs to find his father. His dad will make sense of it. As he heads for his father’s place, more Magistrate forces are sent to stop him. Sean takes them out and speeds away.

In the past, Sean’s father explains to him that there’s a certain way that Gotham operates. It’s about order, and what Sean saw the other night was his father working to maintain a delicate ecosystem that keeps the peace and order in Gotham City.

Sometime later, a young Sean has been mind-controlled by Mad Hatter to steal artwork. After the incident, Sean’s father is upset, convinced that his son was too weak-willed to resist Hatter. He tells Sean that it makes them look bad, that it ruins the Mahoney name.

As Sean takes out more Magistrate soldiers in the present, he remembers when his dad was fired from the police force. His dad was caught taking a bribe, and newly appointed Commissioner Gordon fired him and other dirty cops. This segues into when Sean was a young man and applied for the GCPD six times. Gordon tells Sean that he tries not to judge people, that he tries not to let past mistakes color what he sees.

Sean gets defensive and testy with Gordon, claiming that his dad was only taking bribes like the rest of the GCPD. Gordon corrects Sean, telling the young man that his father did more than take bribes. Gordon then goes on to say that he sees Patrick Mahoney in Sean’s record and eyes. He’s going to deny Mahoney’s application once again.

Batman Secret Files: Peacekeeper-01 #1 continues in the present, as Sean laments everyone trying to stop him or get in his way. He brings out his big guns and takes down the drone that’s been following him, which takes out Saint’s eyes on Peacekeeper-01.

Years ago, Sean gets hired at Arkham Asylum as a security guard. He laments the idea of letting these rogues live, pondering if it would be cheaper to just kill them. Sean is corrected and told that there are layers of paperwork and fees that make it more financially viable to just feed them for the rest of their lives.

At Patrick’s Pub, Peacekeeper-01 finally makes it home. He kicks down the door and looks upon the family photos framed on the wall.

Shortly after being hired at Arkham, Sean enters the cell of Jervis Tetch and beats him as revenge for the robbery so many years previously. Sean is caught, and though he tries to lie by saying Tetch was trying to escape, Dr. Jeremiah Arkham informs Sean that there are cameras that catch everything. Dr. Arkham puts Sean on probation until the end of his contract, one that will not be renewed.

At Patrick’s Pub, Sean takes out the speaker in his ear, finally ending communication with Simon Saint. A gun is placed at the back of his head, presumably from the bar’s owner.

At Arkham, Sean plans to blow up the records storage area during the A-Day attack in Infinite Frontier #0. This is when Batman gets in contact with him, and it’s when Sean sees two nurses who would die if he didn’t intervene and try to save them.

Later, Sean is recovering at the hospital, heralded as a hero of Arkham. He overhears his father outside of his recovery room, lamenting about having to pay for Sean’s medical bills. Once again, Patrick blames Sean for making a dumb decision.

At the pub, Sean turns around to confront the bar owner with the gun aimed at him. It’s his father. Sean finally tells his father off. He’s tired of being the scapegoat of his family. Sean tells Patrick that it was Patrick who ruined the Mahoney legacy, not Sean. He says he came back to this pub to re-center himself, but all Sean found was a mausoleum of memories that don’t belong to him anymore.

Analysis: Batman Secret Files: Peacekeeper-01 #1 aims to give readers a reason as to why the hero of A-Day would so easily cast aside his Saint Industries benefactor and join in with Scarecrow. At the heart of this Secret Files entry is an interesting story that tries to interweave a narrative about an abusive father with a storied history of Gotham.

We learn that Sean comes from a long line of Irish police officers and that his great-great-grandfather was an immigrant who lost his life in building someone else’s dream. That’s why the Mahoney’s turned to policing, as it was the only way that a poorer family in Gotham could earn some respect and power.

When James Gordon becomes commissioner, this proud line of powerful Mahoney officers is cut short, and Sean’s dad takes it out on him. Sean knows that he wants to save the city, that he wants to instill a sense of order. It’s in his blood. It’s in his history. However, Sean’s familial tether to Gotham has been severed, so he has been cast adrift.

Like his father, Sean is angry and violent, taking his vengeance out on the Mad Hatter and others at Arkham Asylum. The root of his problem, however, is his feelings of inadequacy. Sean, for much of his life, has been made to feel less by his dad. This translates into how he unhappily gets in line under the thumb of other authority figures. It’s why he throws in with Simon Saint, and it’s also why he ends up joining Scarecrow as well.

The fact that it’s Scarecrow that Sean ultimately sides with comes across as a stretch, especially since Sean recognizes Scarecrow and his villainous deeds. There’s a history that Dr. Jonathan Crane and Sean clearly knows enough about it. That’s where this issue stumbles just a bit in its plotting.

That said, the theme of a family’s storied history in Gotham, the idea of an immigrant helping to build the foundation of Gotham and his descendants solidifying a power base, is really interesting, and it helps ground Peacekeeper-01 as a character that we should pay attention to. We can even empathize with him a little bit. He’s lost, angry, confused, and like a wild dog with nothing but Scarecrow to tether him to some sense of purpose. Writer Ed Brisson does a decent job of trying to layer all of this depth to what would otherwise be just a faceless henchman, one originally belonging to the Magistrate and now belonging to Scarecrow as seen in Batman Secret Files: Peacekeeper-01 #1. Sean is tragic, and one can’t help but feel a little bit sorry for him.

Joshua Hixson takes on art duties for this Secret Files issue. Whereas Batman Secret Files: Miracle Molly #1 had a Blade Runner sci-fi aesthetic to it, this installment feels more like a 70s crime drama. The colors are muted, and the faces are mostly absent and lacking any emotion. I’m not quite sure it works for this story, but I can appreciate the sullen tone the Hixson and colorist Roman Stevens were going for.

Batman Secret Files: Peacekeeper-01 #1 is a mostly successful backstory for Peacekeeper-01 that turns said villain into something of a tragic character.