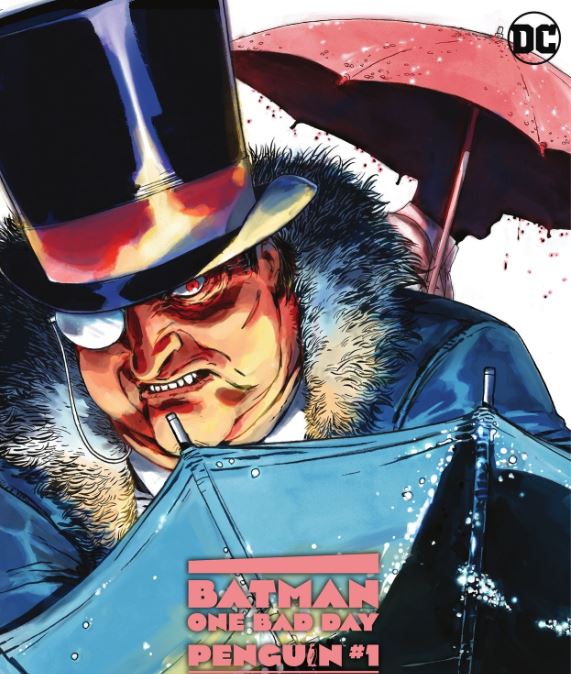 Synopsis (spoilers ahead): Batman: One Bad Day: Penguin #1 begins outside of Gotham City as a disheveled Oswald Cobblepot sits on a park bench. He waits for a young punk to arrive, a punk who sells Cobblepot a handgun with a single bullet.

Penguin, who takes verbal abuse from this young man, tells the dealer that he’s going into Gotham and that he plans to use the gun there.

In Gotham City, a lady of the night propositions Penguin as he’s headed toward an apartment building. Oswald displays pity for her and asks her to wait there as he heads in.

Oswald enters the apartment of a man by the name of Max, who was his head of security. Penguin gets Max to confess how much he was paid off by Umbrella Man. It was a measly $25,000. When Max defends his action by saying Penguin never gave him a shot to make a man out of himself, Oswald sees that Max is strung out and notes that the measly sum of $25,000 went to getting wasted.

When Penguin asks for the money that Max received, Max pulls a gun. Penguin fires once, killing his former associate. He then takes Max’s gun, which has three bullets left, and whatever money he hadn’t spent on drugs.

Outside of the apartment building, Penguin offers the prostitute some cash to join his crew as he retakes his criminal empire. She takes the money and bolts, leaving Penguin alone, watching the Batwing fly over Gotham.

Meanwhile, Batman is overwhelmed. Inside the Batwing, he receives reports on all of the crimes currently taking place in Gotham. He picks one involving gunshots, leaping to the rescue of police officers involved in a standoff. Batman saves the police officers, but it feels futile, as there are more gunshots going off elsewhere.

At a diner, Lili “Buster” Kwan meets with Penguin. He wants her help to reclaim his empire. Lili makes her feelings known that she’s upset with him. She helped him build his empire once before, but when Penguin reached the top, he cast her to the side to associate with the rich and beautiful.

Penguin apologizes. He then affirms his need to retake his empire because of his restraint. Umbrella Man’s empire is messy, and he doesn’t care where he gets his money from. Oswald argues that he instilled rules and kept Gotham safer.

When the bill comes, Penguin gives his last $5 to cover Lili. He tells her that he never called her “Buster.” He also tells her that he gave her respect when they were together, and he’ll do that again. No one will see her as a diminutive, ugly enforcer anymore. Lili agrees to help Oswald.

Next, Oswald and Lili meet with Frank at his warehouse. Frank was an old member of Penguin’s crew who turned his back once Umbrella Man took over. Penguin implores Frank to help him take over once more. When Frank refuses and aims to flex over Oswald, Lili leaps into action.

Suddenly, a young man named Elliot disturbs the scene. It turns out he’s the nephew of one of the knocked-out enforcers, and he was looking for a job. Penguin offers him a spot on his new team.

The team then goes to a repository where Penguin used to launder his money. He gives Elliot the gun, as no one would expect Elliot to pull a gun.

Inside the repository, Penguin meets with Johann, a man he gave $250,000 for a rainy day. Johann, unsurprisingly, refuses to give Penguin his money back, claiming that it belongs to Umbrella Man now. When Penguin tries to put the squeeze on Johann, the banker threatens to murder Oswald.

Elliot opens fire, missing everybody. Penguin uses it as an opportunity to explain how mentally unhinged Elliot is, telling Johann that Elliot was found to be too unstable to work for the Joker. The ruse works, and Penguin and his small crew leave the banker with a bankroll.

Batman: One Bad Day: Penguin #1 continues across town as Johann explains the situation to Umbrella Man, embellishing where appropriate. Umbrella Man doesn’t take the news lightly, killing Johann as a result. Umbrella Man’s right-hand man tells the crime lord that Penguin is most likely going to use that money to hire Freida and her gun, who are the best guns in town. Umbrella Man orders his men to kill Freida before she can kill them.

Freida rejects Cobblepot’s offer, telling him that he humiliated them.  When Cobblepot offers more money, Freida still refuses. It’s not about the money or the job.

While Oswald sulks and realizes that he took everything for granted, Umbrella Man’s men gun down most of Freida’s gun gals. This pushes Freida to call Oswald and accept his offer. Umbrella Man is going to pay.

Elsewhere, Commissioner Renee Montoya informs Batman of all the night’s gangland violence. He surmises that this is Penguin coming back for retribution. He plans to track down Oswald and bring him to justice.

While Penguin and his crew head for Umbrella Man, they’re stopped by Batman. Penguin tells Batman that the illusion of his protection over Gotham was a ruse. Penguin supplied Batman’s rogues, but he supplied them only enough to be a bother. Penguin claims that he kept the balance in Gotham and that without him, Gotham is much worse off. Umbrella Man, Penguin says, doesn’t care for the theatrics and playing with Batman, but Penguin will bring that Gotham back. When Batman pushes back on this idea, Penguin reminds him of all of the rapes and murders going on while Batman busies himself with Penguin. Batman leaves, telling Oswald that he’ll come for Cobblepot tomorrow.

Five months later, Penguin is all dressed up and back to running things. Batman drops by, telling him that he’s going to come after Penguin again. Oswald tells Batman that things are different now, that this time, he actually has friends.

Analysis: In Batman: One Bad Day: Penguin #1, writer John Ridley and artist Giuseppe Camuncoli treat readers to a street-level crime thriller where Penguin, believed to have been killed, finds himself reclaiming his empire. It carries a very 70s crime vibe, but there are plenty of moments of humor and heart that keep this story grounded.

Penguin’s characterization feels similar to Robert Mitchum in a way, particularly Mitchum’s persona in The Friends of Eddie Coyle. While the plot of this issue is completely different, the vibe adds a bleak backdrop that sells this idea of Penguin, down on his luck, clamoring for everything he had.

Along the way, Penguin realizes that he’s stepped on so many others, and these others have all turned their backs on him in one way or another. In truth, Penguin created the mess he finds himself in, and it’s up to him to bring back his flock and retake Gotham. Oswald justifies his gang war by trying to convince everyone, himself included, of how he kept Gotham metered. Crime wasn’t as bad as it is under Umbrella Man. After all, Penguin was a criminal with a heart, though the story tells us the opposite in many instances.

Oswald is a user. He just pushed too far, and now he has to repair things. Maybe Penguin kept Gotham’s crime measured, but he indulged too much himself. As retribution, it seems Penguin will have to measure his own activities and keep his friends close this time.

Camuncoli’s art is absolutely beautiful in Batman: One Bad Day: Penguin #1, and Arif Prianto’s colors are mesmerizing. Though bleak at times, there are a lot of vibrant moments that make this installment feel animated and alive.

Overall, it’s the best of the One Bad Day issues thus far, though the story is confusing as to when it takes place. Montoya is the commissioner, which makes it feel current, but the last we saw Penguin, he left Gotham behind to escape being a crime lord once and for all. Has that changed, or is this an Elseworlds tale?

Batman: One Bad Day: Penguin #1 is an effective and fun crime thriller that sees Penguin reclaim his empire. It’s deep, thoughtful, and littered with heart.