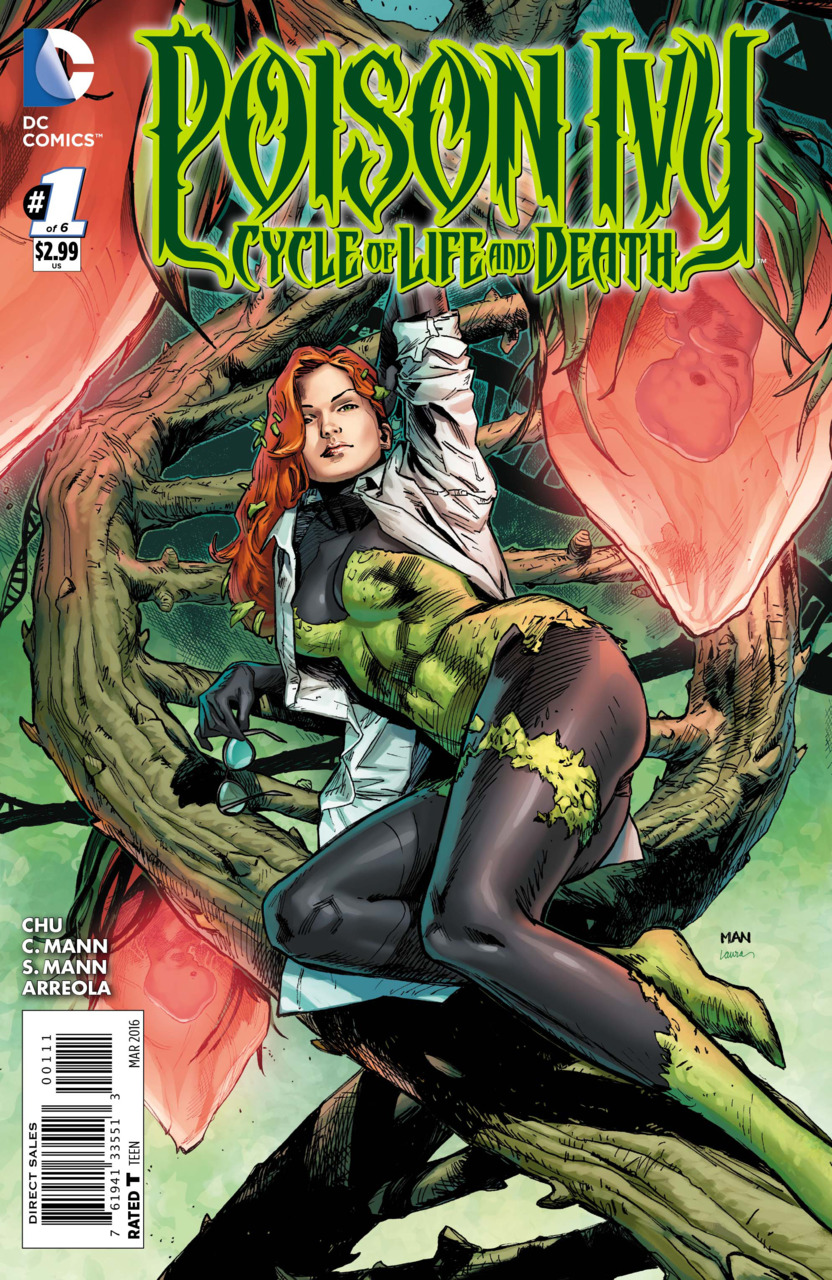 Poison Ivy is confronted by a horticultural mystery centered around an ancient plant unleashed on the modern world in Poison Ivy: Cycle of Life and Death #1.

Ivy is in Southern Angola looking for an ancient plant. She tells her driver and guide, Dr. Nepolo to stop the car. She has found the living fossil plant Welwitchia Mirabilis. They begin to dig up the plant when they are interrupted by some bad guys from the nearby diamond mine who threaten them. Much to Nepolo’s surprise Ivy gets the plant to attack the thugs.

Days later in a greenhouse at Gotham Botanical Garden Ivy is working with Dr. Luisa Cruz who has just hired her over the objection of her boss Dr. Grimley who has a problem with working with women. They give a tour of the greenhouse to some students from Gotham Academy (Maps, Olive, Pomeline and Colton hooray!). Ivy discusses the work they are doing combing animal and plant DNA. The tour is interrupted by an unexpected visitor, Dr. Harleen Quinzel. Ivy introduces Harley to Luisa. Harley is jealous of the attention Ivy has been giving to her work and convinces Ivy to go out with her. At a bar Harley, now in full Harley Quinn dress, asks Ivy why she is working at all since money isn’t a problem for her. Ivy says she likes being around smart people which really annoys Harley, who picks a fight with some annoying guys at the bar. After some butt kicking Ivy sprays a pheromone spray on two of the guys which causes them to kiss. This annoys Harley even more which causes an uncomfortable discussion of Harley’s choices in men. Harley storms off leaving Ivy alone.

Back at her apartment Ivy takes care of the three cuttings of Welwitchia Mirabilis plants she has brought home from the greenhouse. Ivy pines to be with someone more like herself as she falls asleep. When she wakes up she finds that the plants have grown to an astonishing degree, they are huge. Ivy hurries to the Gotham Botanical Garden to tell Luisa of the development. She sees that Luisa’s car is in the lot and wonders why she is in so early. She discovers Luisa on the floor apparently dead with a green hue to her skin. Until next month…

This is an excellent first issue of this series. It is pretty obvious to the reader that the ancient plant Ivy discovers is going to be the cause of the problems she encounters. But is sure is fun to see her trying to figure out what is going on. I can’t say I liked all of the interactions with Harley, it seems like they are creating a fight between the two because the plot demands it. But it was good to see 2/3 of the Sirens as intelligent women rather than sexpots (well, Harley does go to the wild side for a few pages). Harley is emotionally unstable and that comes through here contrasted with the more solidly configured Ivy. I hope that they find a way to bring them back together because the contrast of the two personalities tend to make each stronger.

And I have to give a big hip hooray to the author Amy Chu for including the Gotham Academy bunch even if it is for just one panel or so. Fantastic!

I also liked the different artistic approach on the Gotham Academy kids, especially Maps, taken by penciler Clay Mann and Inker Seth Mann. Overall the artists depict Ivy as beautiful but not a sex doll as she is sometimes portrayed. The title page drawing of her shows a strong, smart adventurous beauty that isn’t posing for your gaze. They do sexualize up Harley however, which is par for the course but I hope they avoid this in the future.

The one negative I will say about the art is that the characters don’t seem to connect with each other. The drawings are excellently done but it seems a little cold and aloof. I hope this changes as the series progresses.

I am going to give this a very good rating because of the story and characterization of Ivy here, but also because I think the mini-series shows great promise.