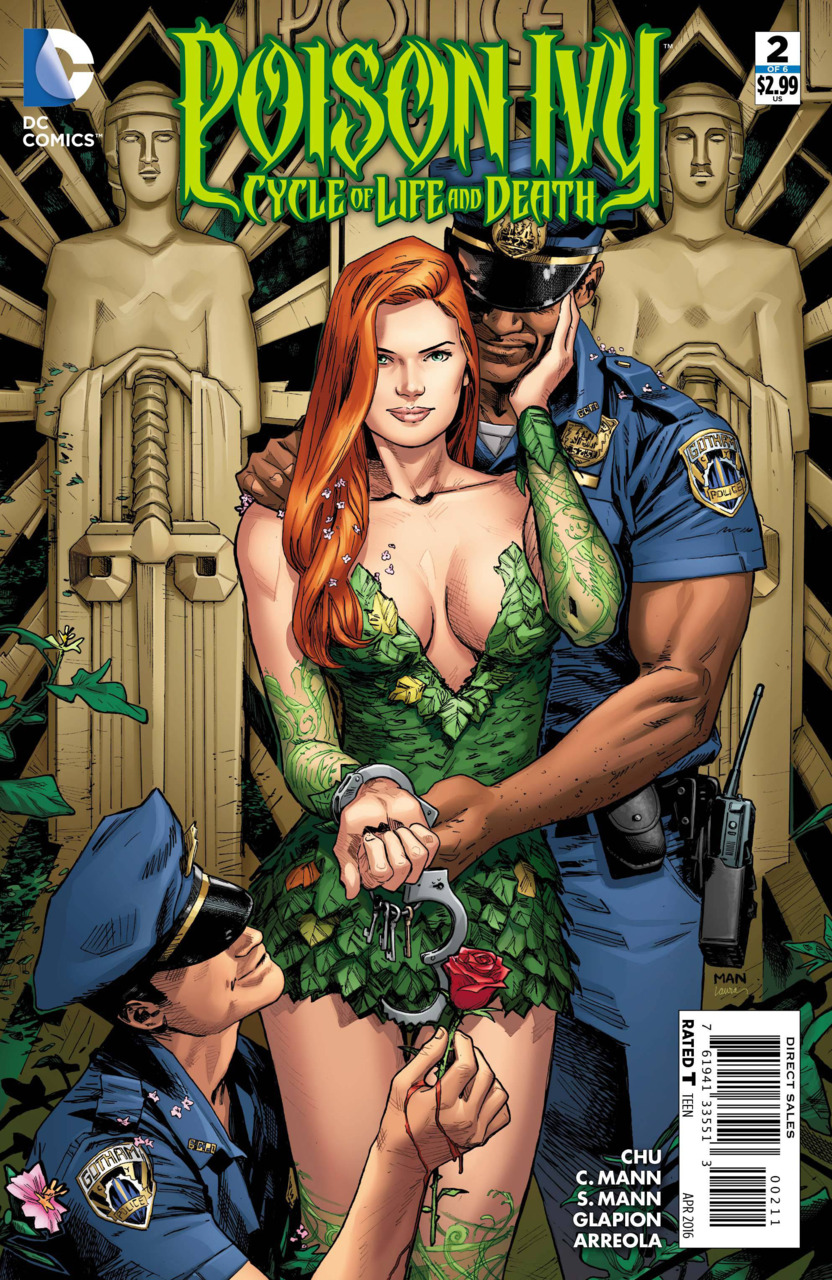 Poison Ivy is embroiled in the investigation of the death of a friend and colleague as intrigue swirls around the Gotham Botanical Garden Laboratory in Poison Ivy, Cycle of Life and Death #2.

The police are at Gotham Botanical Garden investigating the death of Doctor Luisa Cruz who was apparently poisoned by the very Yew trees that she studied. Victor Lee, the Head Administrator at the Lab is sure that the death was accidental. Ivy says that she doesn’t believe that Luisa was careless enough to poison herself. Ivy tries to explain her whereabouts on the night of the death but she hedges when it seems the police may want to interview Harley to confirm the alibi. Harley isn’t exactly trustworthy. Seeing her hesitation, her colleague Winston steps in and says they were at a movie together.

Ivy heads back home to her new roommate, a human plant hybrid about to ‘give birth’. Ivy sets up motion detectors around the plant so she can be alerted to any activity.

A week later Ivy visits Darshan Bapna, a co-worker at the lab who is setting up a community garden in the memory of Dr. Cruz. Suddenly two pit bulls enter the garden which causes Darshan to cower in fear. Ivy ties up the dogs with vines long enough to calm them down. She finds the owner of the dogs and teaches her the hard way that its bad to mistreat your pets.

The next day at the lab Ivy suggests to Victor that she doesn’t believe Luisa poisoned herself. Victor lets Ivy know that she is the one and only Poison Ivy and that it isn’t in her best interest to stir up trouble about Luisa’s death. On the way out Ivy meets Darshan in the hall and he admits that he lied to the police and hadn’t seen Dr. Cruz the night she died. Instead he sang on Gotham’s Got Talent. It turns out that he would rather be a singer than a scientist. He went into science under pressure from his family. He is member of the Jain religion and a super pacifist, vegetarian and even respects plant life.

Ivy gets an alert from her motion detectors and returns home. Her plants give birth to what appear to be human-ish babies. Meanwhile Darshan goes to Dr. Grimley’s office at the lab and discovers him dead. Until next time…

Writer Amy Chu continues to write a solid mystery story with a side of horticultural futurism that is interesting. Why is Victor trying to suppress the police investigation? Who really killed Dr. Curz and Dr. Grimley? It all more or less works. Ivy’s treatment of the old lady with the dogs is kind of odd however, as was her icy treatment of Harley in the last issue. If Ivy feels free to kill an old lady who mistreats her dogs what is the big deal about the death of Dr. Cruz? It seems as if Ivy places a low value in human life and if so, what is so important about this murder mystery? Is it all about the plants for Ivy? And if so, why is she working in the lab in the first place.

These problems don’t exactly sink this book, but it is making the storytelling somewhat uneven. Last issue was terrific but these issues are beginning to collect and hopefully the very talented Amy Chu will be able to work them out.

Another concern about this issue that didn’t exist in the last is the unevenness of the art. Last issue’s Pencils were by Clay Mann and the Inks by Seth Mann. This issue adds Jonathan Glapion and Art Thibert on inks. The art in the last issue was solid throughout but this time around there are some poorly executed panels. Most of the full page panels are lovely and depict Ivy beautifully and dynamically. Other panels, such as the one where Winston makes an alibi for Ivy seem clumsy. There were a few critical scenes that were poorly executed such as exactly what Ivy did to that old lady and the final discovery of Dr. Grimley’s body. I am still not sure of the sequence of events when Darshan entered the Dr.’s office.

The colors by Ulises Arreola are appropriately soft and earthy. There are many browns and sages which contrast nicely with the red of Ivy’s hair. All in all a good palette for the nature loving Ivy.

Last issue I was very generous with my rating. This time however I am going to be more critical though I am still on board with this series and want to see it improve. I would like to see some more clarity.