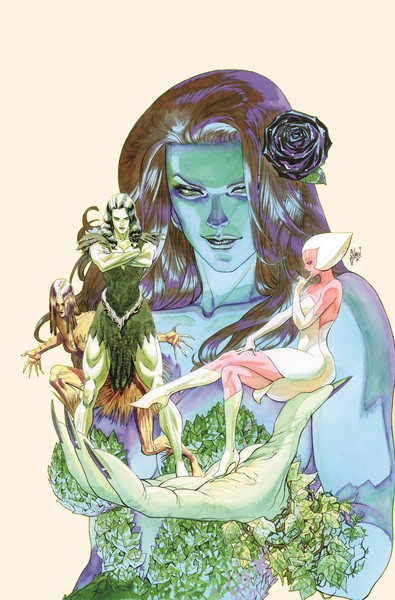 USA Today has announced that in January, DC Comics will be launching a number of new mini-series. One of the new mini’s focuses on Poison Ivy titled, Poison Ivy: Cycle of Life and Death, by writer by Amy Chu. There was just a little bit of information released about the new series.

Chu takes the Batman villainess in “a really new direction,” Harras says, “and it’s a fun twist on her character and where she’s going to go.” Chu finds Poison Ivy “a fascinatingly complicated character with an incredible fan base,” she says. “We know her, but we don’t really know her. There’s so much opportunity to build her world without the burden of continuity. And let’s face it, writing villains is more fun.” Taking a big role in the DCU is also a very personal challenge for Chu. “My grandfather was a doctor in Hong Kong back in the ’50s, and apparently he was a huge DC fan,” the writer adds. “For years, he would have comics shipped to his office from the U.S. So for me to be writing comics today, and especially DC comics, is some kind of crazy karma.”

This Poison Ivy miniseries will join seven other miniseries that DC is releasing in January. Among the limited series are “Swamp Thing,” “Metal Men,” “Raven,” “Firestorm,” “Katana: Cult of the Kobra,” “Metamorpho”and “Sugar & Spike.” The new series will feature a mix of creators both classic and modern and, as DC Editor-in-Chief Bob Harras said in the announcement, will spotlight “what’s so fantastic about these characters.”  Some of these series will be written by the original character creators (Len Wein – Swamp Thing, Marv Wolfman – Raven, Gerry Conway – Firestorm, and Mike Barr – Katana) while others will showcase new writing talent at DC.

Review: Batgirl and the Birds of Prey #13