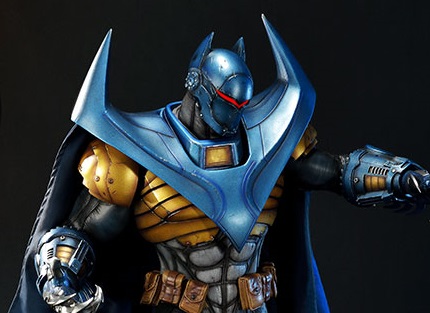 Prime 1 Studio has announced their latest offering from the Museum Masterline series. This time around the Azrael version of Batman from Knightfall is featured. This one third scale statue features a wired cape and interchangeable hands and heads. As usual, there is a standard version and an exclusive version. The exclusive version includes an extra head and is priced at $1,149. The standard edition is priced at $1,099. Both versions are expected to ship in mid-2020. You can pre-order the statue over at Sideshow Collectibles now.

The character first appeared as a villain who became Batman’s pupil and eventually took over the role of Batman through Knightfall. Prime 1 Studio is proud to introduce our MMDC-34 Knightfall Batman from DC Comics. He is a combination of supervillain and superhero. As the characterization, he often changes his personality from a ruthless assassin, Azrael who was created by the Sacred Order of Saint Dumas to a university graduate student of computer science in Gotham City, Jean-Paul Valley. His transition from villain to hero also influence in his appearance. The Museum Masterline Batman statue adopts a variety of Azrael’s costume styles. He wears a reinvented Power armored Batsuit that has a blue cape and a stylized blue bat symbol on the chest with the accent of yellow and gray color. There is a variety of poses that could be interchanged such as the two sets of gauntlet blades, two alternative portraits to give all the most iconic expression. The Exclusive version of MMDC-34EX Knightfall Batman includes an additional alternative portrait. Knightfall Batman Fans don’t miss your opportunity to get the new protector of Gotham City!