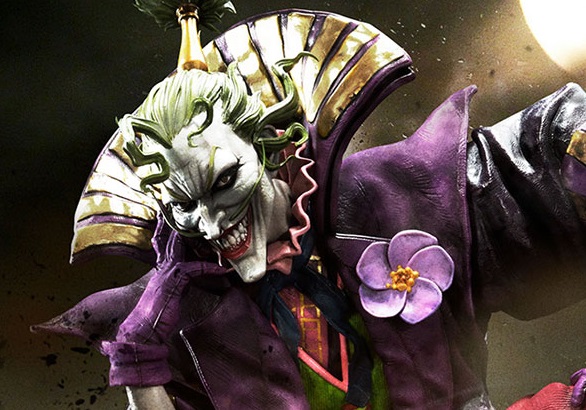 Prime 1 Studio has released details for their latest statue, which features Sengoku Joker from Batman Ninja. It measures about twenty-eight inches tall and features a design inspired by animator Takashi Okazaki. There is a deluxe version available that features a piece of Japanese art as a backdrop for the piece. The regular version is priced at $1,199 and $1,499 for the deluxe version. It is expected to ship between October 2020 and March 2021. You can preorder the regular version or the deluxe version now at Sideshow Collectibles.

“Oh, I never really wanted to be a Lord. It wasn’t what you would call an aspiration. But when life throws you time travels, sometimes you gotta make travel-ade.”

Sideshow and Prime 1 Studio are proud to present the Sengoku Joker from Batman Ninja (Animated Film). From the top creators of Japan, Batman Ninja is a Japanese animated film directed by Junpei Mizusaki (“Opening Animation for JoJo’s Bizarre Adventure Series”).

Batman Ninja takes a journey across the ages as Gorilla Grodd’s time displacement machine transports many of Batman’s worst enemies to feudal Japan – along with the Dark Knight and a few of his allies. The villains take over the forms of the feudal lords that rule the divided land, with the Joker taking the lead among the warring factions. As his traditional high-tech weaponry is exhausted almost immediately, Batman must rely on his intellect and his allies including Catwoman and the extended Bat-family to restore order to the land and return to present-day Gotham City.

The Statue is inspired by Takashi Okazaki’s stunning design that he created for Batman Ninja Animation. It is crafted with great attention to detail. We also believe it perfectly captures the atmosphere of feudal Japan and the characteristics of Joker. The words on the flag say Devil King Of The Sixth Heaven (Dairokuten-No-Mao/ 第六天の魔王) which is a Devil King from Buddhism.

It is a great companion piece to display next to the Ninja Batman. Make sure to collect these two unique statues!