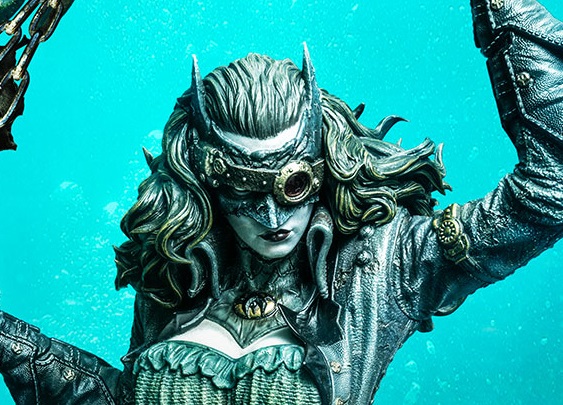 In a quick update to an announcement made this past February, Prime 1 Studio’s latest statue offering featuring the Drowned from Dark Nights Metal is now available for preorder through Sideshow Collectibles. As the original announcement stated, this statue is part of their one-third scale Museum Masterline series. It stands about thirty-five inches tall and is available in two different editions. The standard edition is priced at $1049, while the deluxe version is priced at $1099 and includes an extra portrait and interchangeable arm parts. If ordered through Sideshow Collectibles, the statue is expected to ship between April and July 2021.

“My amnesty begins here. I light my signal. My light… to show this world my intent… I’m going to drown it all. This whole world. Trust me on that.”

Prime 1 Studio is proud to present The Drowned Statue from The Dark Nights: Metal.

It is a beautifully crafted statue with exceptional attention to detail.

The Drowned Statue stands approximately 35 inches tall and it is a must-have for all DC Comics Dark Nights: Metal fans!