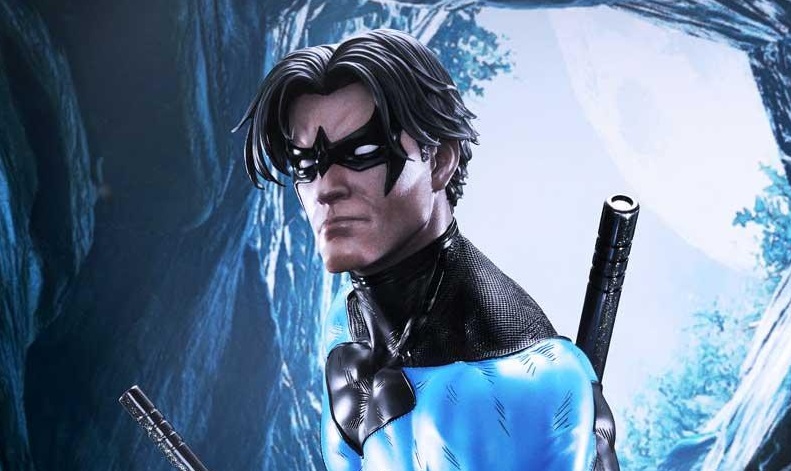 Prime 1 Studio has released details for their latest DC Comics statue, which features Nightwing in a one-third scale base don his appearance in Batman: Hush. The statue measures thirty-four inches tall and will be offered in two additional versions on top of the standard version. The exclusive version comes with an additional portrait while the bonus version comes with swappable escrima sticks. It is priced starting at $1,049 for the standard version, $1,099 for the exclusive version, and $1,140 for the bonus version. All versions are expected to ship between May and November 2022 with all versions available for preorder at Sideshow Collectibles.

Prime 1 Studio is proud to present the Nightwing from DC Comics Batman: Hush.

Batman: Hush is a 2002-2003 comic book story arc that was published in the Batman monthly series. The story depicts a mysterious stalker, head wrapped in bandages, called Hush, who seems intent on sabotaging Batman from afar, and utilizes many guest appearances by Batman villains. One of Gotham City’s greatest protectors is back in blue! Formerly Batman’s sidekick Robin, Dick Grayson is all grown up and on his own.

Inspired by the art of Jim Lee, Nightwing is a beautifully crafted statue with exceptional attention to detail, very similar to the comic art. The base is designed as the top of a building tower standing approximately 34 inches tall. Nightwing holds his signature weapons, the twin fighting batons, Escrima Sticks.

It is the ultimate must-have Nightwing statue for all the Batman: Hush fans. Don’t miss adding this statue to your DC collection!