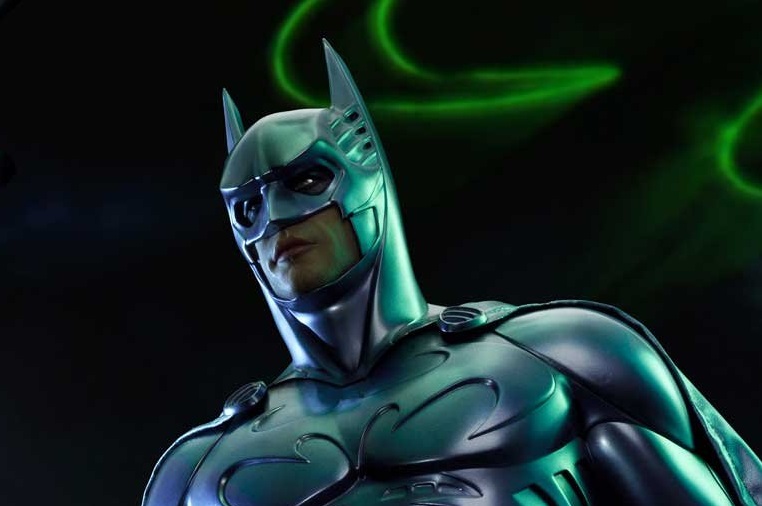 Prime 1 Studio has released details for their latest Museum Masterline statue, which features Batman in the sonar suit from Batman Forever. The statue comes in a one-third scale and measures about thirty-seven inches tall. As with most Prime 1 Studio statues released, there are is an exclusive item available if ordered directly through Prime 1 Studio which features an additional right arm equipped with a sonar batarang. The statue starts at $1,399 and is expected to ship between May and August 2023. You can preorder the statue directly from Prime 1 Studio for the included bonus part now or from Entertainment Earth.

“I see without seeing. To me, darkness is as clear as daylight. What am I?”

In the climactic third act of 1995’s Batman Forever, Batman debuts a new version of his costume, the Sonar Suit! And now, Prime 1 Studio brings you a shiny, sleek, and metallic, 37-inch-tall Batman to celebrate this wildly enjoyable movie!

As usual, our skillful team of sculptors and painters have expressed their passion and dedication in their work by crafting a Batman with incredible likeness and impeccable quality! Batman’s second costume from the film is impressively decorated with finely detailed appointments and a spectacular paint job! The unbelievable craftsmanship in his face is absolutely moving: from his lifelike eyes to the subtle pout of his lips to the natural complexion of his skin. Posed in an iconic stance, Batman Sonar Suit is ready to spring into action during the penultimate battle with Riddler and Two-Face!

Batman comes equipped with two (2) swappable heads: one is a standard head, while the other one features LED illumination in Sonar activated mode! Perfect for displaying in a dark room! His synthetic leather cape flows and shines, a wonderful accompaniment to his mind-blowing suit. Batman stands on a Batcave-themed pedestal adorned with Batman Forever symbols.

Act now and purchase the Batman Sonar Suit Bonus Version from our official online store or authorized distributors, and you will receive a bonus part: one (1) swappable right hand with Sonar Batarang!
This Batman Sonar Suit Bonus Version statue is the perfect companion to any Batman Forever statues and accessories: Batman MMBM-01, Batman Gadget Wall MMBM-02, and Robin MMBM-03!!! So, what are you waiting for? Order it!