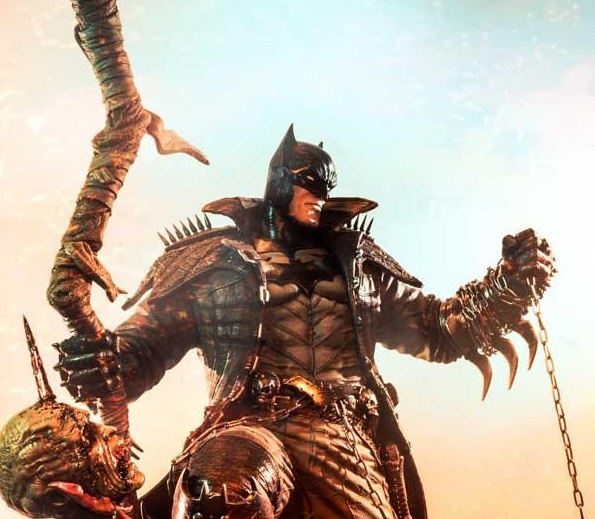 Prime 1 Studio has released details for their latest Museum Masterline statue, which features Batman based on his appearance in Dark Nights: Death Metal. The one-third scale statue measures about forty-one inches tall. The deluxe version includes four additional head sculpts, a headstand, and two different scythe blades. As with most Prime 1 Studio statues released, there is an exclusive item available if ordered directly through Prime 1 Studio in the form of an additional head. The statue starts at $1,599 for the standard version and $1,799 for the deluxe version. It is expected to ship between August and November 2023. You can preorder the statue directly from Prime 1 Studio.

“You know me. You don’t know Batman.”

Prime 1 Studio is extremely excited to be rocking one of the greatest Dark Knight designs of all time: the 1:3 Scale DEATH METAL BATMAN from DARK NIGHTS: DEATH METAL!

Dark Nights: Death Metal was meant to end all previous storylines and universes into a single universe. With all of reality at stake, it is in the midst of this battlefield that we meet Death Metal Batman. This version of Batman is a head-banging, hard-rocking, lead-guitar soloist of doom as he goes head-to-head against the evil forces of the Darkest Knight, himself, The Batman Who Laughs!

Prime 1 Studio has crafted a Batman at his most dangerous! At a commanding 41 inches tall, he has shed every pretense of subtlety! Batman has covered himself in a grungy, bat-like leather trench coat with over large shoulder spikes, solid metal bracers with razor-sharp fins, and an industrial strength utility belt chained to the toughest-looking, butt-kicking boots! In the books, his trench coat grants Batman the power to cloak himself from detection. The Dark Knight has taken it upon himself to become a post-apocalyptic Grim Reaper by wielding a giant scythe as his signature weapon! Most of all, he has found himself the owner of a powerful Black Lantern ring, allowing him to command an inexhaustible supply of reanimated corpses: his Undead Army!

Struggling against Batman is one of The Batman Who Laughs’ Robin Minions, clearly, quite upset at being captured and chained up like a rabid dog. They are surrounded by a small contingent of desiccated zombies and eldritch tentacles! All this, set against a backdrop of gothic ironwork, high-octane exhausts, realistic, bat-themed masonry…even a severed head on a pike! The skull of Barbatos, the Bat God, adorns this heavy metal, hard-rock, love letter to crazy statue bases!

Take it from the passionate craftsmen at Prime 1 Studio, in the battle against the ultimate, universe, and reality-ending evil…this Batman statue SHREDS HARDCORE!