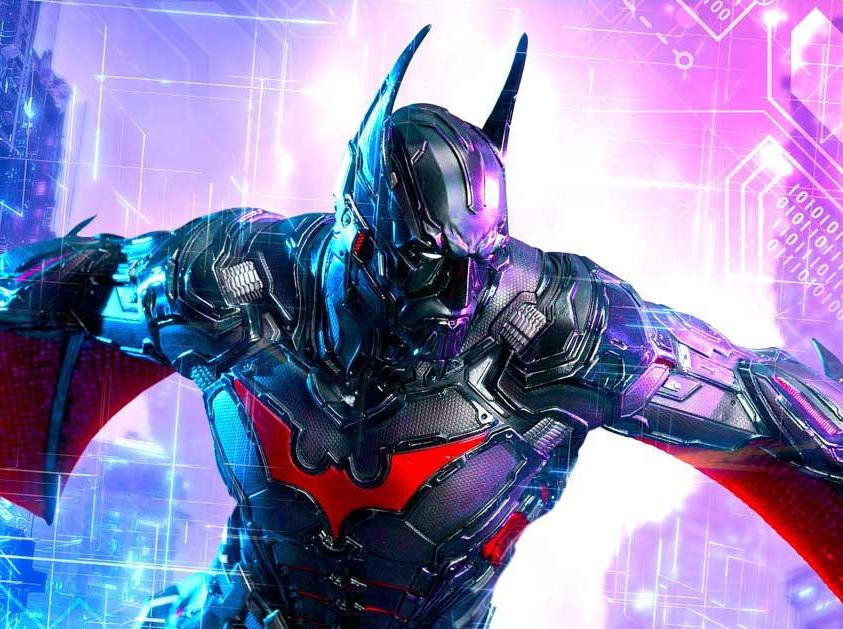 Prime 1 Studio has released details for their latest Museum Masterline statue, which features Batman Beyond based on a concept design by Will Sliney. The one-third-scale statue measures about twenty-eight inches tall. There is a version available that includes an additional swappable head. The statue starts at $1,499 and is expected to ship between November 2023 and February 2024. You can preorder the statue directly from Prime 1 Studio or from Entertainment Earth (the standard version or the bonus version).

“Every time I put on that suit, it’s my chance to help people who are in trouble.”

Prime 1 Studio is absolutely excited and proud to finally be able to offer this stunning, long-awaited character to everyone: the 1:3 Scale MMDC-58S Batman Beyond Concept by Will Sliney Bonus Version from DC Comics!

At an impressive 28 inches tall, Batman Beyond, in all his technological glory, rises from the cockpit of a futuristic version of the Batmobile. He is ready to take to the skies to protect a crime-infested cyberpunk in Gotham City.

While the classic Batman Beyond design was iconic, beautiful, and perfect, our Prime 1 Studio artists endeavored to create a statue that demanded to be looked at. His whole suit features intricate, mech-inspired armor plating, from front to back, top to bottom. This Batman Beyond is full to the brim with complex detail. The armored bodysuit and wings are full of minute details. Intricate paneling, the hexagonal texture of the armor plates, and features that are clearly derived from his classic design are updated for a much more discerning and appreciative audience. Our artists at Prime 1 Studio have delivered a breathtaking sculpt that is painted equally to perfection. The ominous, black paint job of multiple finishes is punctuated with metallic red highlights to show off the complexity of Will’s design.

And when you pre-order this Bonus Version from our official online store or any authorized distributor, you will receive a cool, extra Bonus Part: a swappable head with cool, red eyes! Batman Beyond is poised to exit his amazing futuristic, flying Batmobile. The small taste of the Batmobile cockpit and its complex array of instrument panels, a well-appointed flight chair, and high-tech controls was designed to amaze.

MMDC-58S Batman Beyond Concept by Will Sliney Bonus Version will be an instant buy for Batman Beyond fans everywhere, so don’t delay. Pre-Order now!