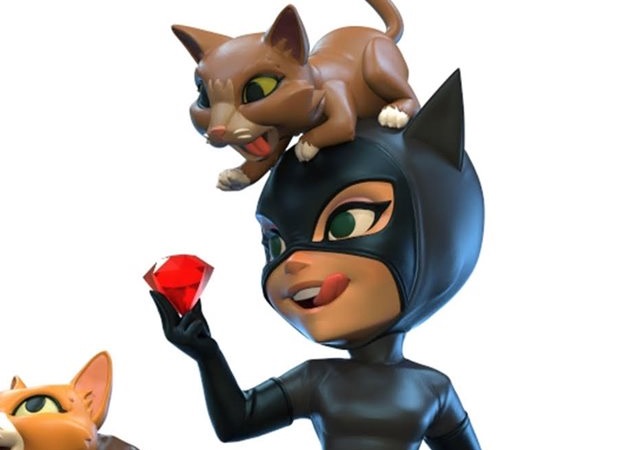 Quantum Mechanix has released details for their latest Q-Fig Elite, which features Catwoman from Batman: The Animated Series. It measures five inches tall and features Catwoman showing off her gemstone loot surrounded by her cat companions. It is priced at $29.99 and is expected to ship in January 2021. You can preorder the figure now at Entertainment Earth. Inspired by her appearance in Batman: The Animated Series, the Catwoman Q-Fig Elite features Selina Kyle accompanied by her true loves – a pack of friendly felines and one massive gemstone liberated from a local collector. We’ve sculpted Catwoman to purr-fectly capture her mischievous malfeasance, as well as render a high degree of detail into her costume, the kitties, and the gargoyle she’s standing upon.

Those collectors who have been with us since the beginning may notice a more-than-passing resemblance to our original Catwoman Q-Fig, done and gone many years back. That classic Q-Fig has achieved legendary status as our rarest Q-Fig, and our new Catwoman takes the story and pose from that much-beloved figure and reimagines it using our current state-of-the-art design and manufacturing techniques.

The Catwoman Q-Fig Elite brings Catwoman’s story to life on your shelves like never before with QMx’s proprietary Everstone™ polymer, allowing for minute details and intricate sculpting not possible with traditional materials.

The Catwoman Q-Fig Elite stands approximately 5 inches tall including the display base. Collect Catwoman, The Last Knight and the rest of our DC Q-Figs today!

Why Elite? Our Q-Fig Elite dioramas take everything that makes Q-Figs special – the inventiveness, detail, movement, and storytelling – to bring them to a whole new level. Action is bolder, sculpts are more intricate, costumes, poses, environments and character interactions go beyond anything you’ve seen before in a collectible figure. Q-Fig Elite is a revolution.