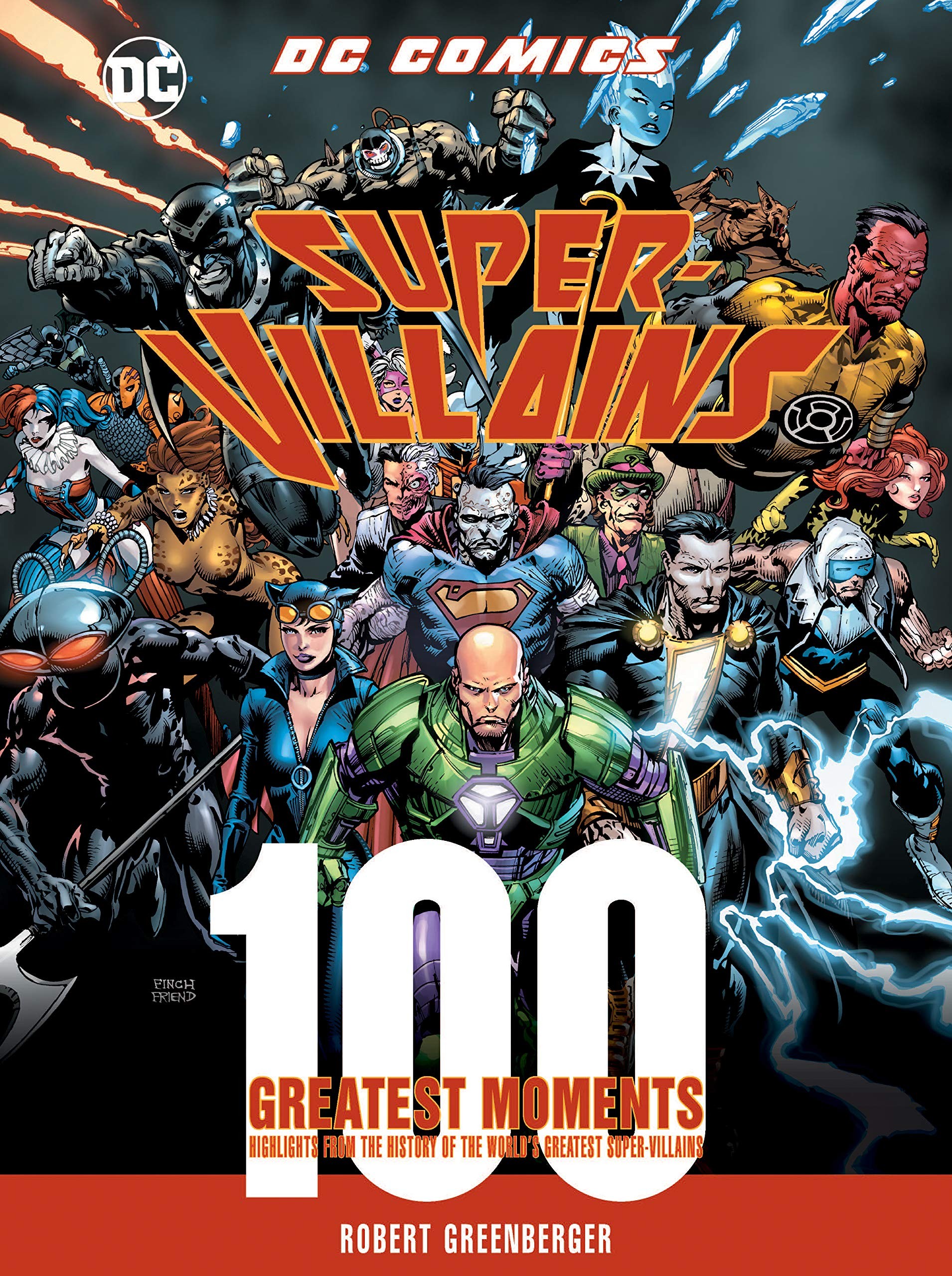 Overview: This showcase of DC Comics’ greatest villains and their various attempts to screw over the heroes is the latest offering from Chartwell Books.

Analysis: Robert Greenberger is back at it again with another 100-Greatest-Moments in DC history, only this time he is cataloging all the villains that seem to be the most popular to warrant a spotlight. But don’t worry comic fans, DC isn’t just doing a paint-by-numbers of their most marketable heroes. Mordru of all people gets a whole passage just to himself. And if you don’t know who Mordru is, I guess that’s one reason to pick up the book.

In addition to polling fans on social media to find who they most want to showcase, Robert has once again used the help of his researcher John Wells so that everything is “honest and accurate”. He’s also enlisted the aid of fellow writers Mark Waid, Jim Beard, and John Trumbull to add plenty of villainous moments to the list. So if there’re any villains that you loved that aren’t included, you know why that is.

The art and writing in this book is very clear and excellent. I especially love just opening to random pages in the book and just finding comics I haven’t read yet and adding them to my bucket list. There’s a variety of comic pages from all across comics so even if you don’t care too much for the modern stuff, there’s some nice old stuff, while it is still true for those who stick to the modern stuff exclusively. Who knows, maybe this might encourage everyone to check out new comics they otherwise wouldn’t be all that interested in. I know I’m going to be diving into some old Aquaman comics to read about Black Manta.

Like with each of the other 100-greatest-moments books, Greenburger has included helpful comic pages to really drive home what these moments were like and why they were so great.

Unfortunately, the introduction makes it clear this is anything but an unbiased collection of historical moments. I do not mean they just show more villains from a specific hero’s gallery over another. Taken straight from the introduction of the book, I need to show this.

“Bob Kane and Bill Finger certainly mined the pulps and movies for source material, and unlike Jerry Seigal and Joe Shuster, went for darker, deadlier fiends. Professor Hugo Strange gave way to both Joker and Catwoman in Batman #1, the beginning of a memorable gallery of fiends, foes, villains, and antagonists. The Man of Steel’s foes recurred far less frequently at first. Only the scientist Lex Luthor appeared with any regularity for the first few years. Over on Paradise Island, Princess Diana’s opponents tended to fall into two camps: enemies of America or those out to subjugate women”

To anyone who doesn’t realize how problematic this passage is, this is the only part of the introduction that even mentions Wonder Woman at all. This single line deceives the reader into thinking Wonder Woman didn’t have recurring villains in her early run. During the Golden Age, Catwoman only makes seventeen actual appearances (a cursory wiki search will say forty-four, but this includes the Bronze and Silver age appearances which involved Earth-2 Shenanigans), meanwhile, Baroness Von Gunther appeared in thirty-three different Golden Age comics.

This also paints Batman as somehow having more costumed criminal activities in his early days, but Batman had stories with plenty of ordinary criminals who had nothing to do with costumes and masks (though they certainly tried to push Joker into every Batman issue they could in the early issues). And to clarify to younger readers, old Golden Age comics had four separate stories in them back in the day, not one single story like the current issues released.

The book also includes nineteen Batman-related villains among the hundred. For comparison, the Flash, who is considered to have the second best rogues gallery by many comic fans, has six villains showcased and that’s only if you count the Rogues Organization itself among the number. Superman has only nine, ten if you include a Supergirl villain (which I wouldn’t). Nearly one-fifth of the entire book is Batman related. Literally, twenty percent if you include Darkseid, a distinctly Justice League villain, has an entire passage dedicated to when he killed Batman.

However, I can’t just leave this as a purely negative review, because I actually did enjoy the title. I had a number of favorite moments including the Lex Luthor section which showcases some genuinely great moments from Edmond Hamilton’s Superman #164 “Hero on Another World” and John Byrne’s Superman #9 “Everyday Cruelty”. And of course, how can you ignore Bizarro sacrificing his life to save Lex in Forever Evil #7.

The book does a good job showcasing some non-Batman villains. There are a few Shazam villains, some who oppose the Green Lanterns, and a few Organizations like “Brotherhood of Evil” and “Legion of Supervillains”. Even some really out-there villains you likely never heard of like Krona.

Also, once again, like in the Super Heroines title from late last year, the numbering is in alphabetical order, not numerical, so it’s not really a countdown of the best/worst greatest moments, just a historical accounting of the book.

Final Thoughts If you can look past the obvious favoritism towards Batman, the book is still quite good. I know I painted a rather specific picture, but I wanted to make sure people who pick up this book don’t get misinformed by the introduction. Though, to be honest, I’m sure most of you are going to be skipping the introduction anyway and head right for the meat of the book.

Editor’s Note: The Quarto Group provided TBU with a review copy of this title. You can purchase your own copy by heading over to Amazon.