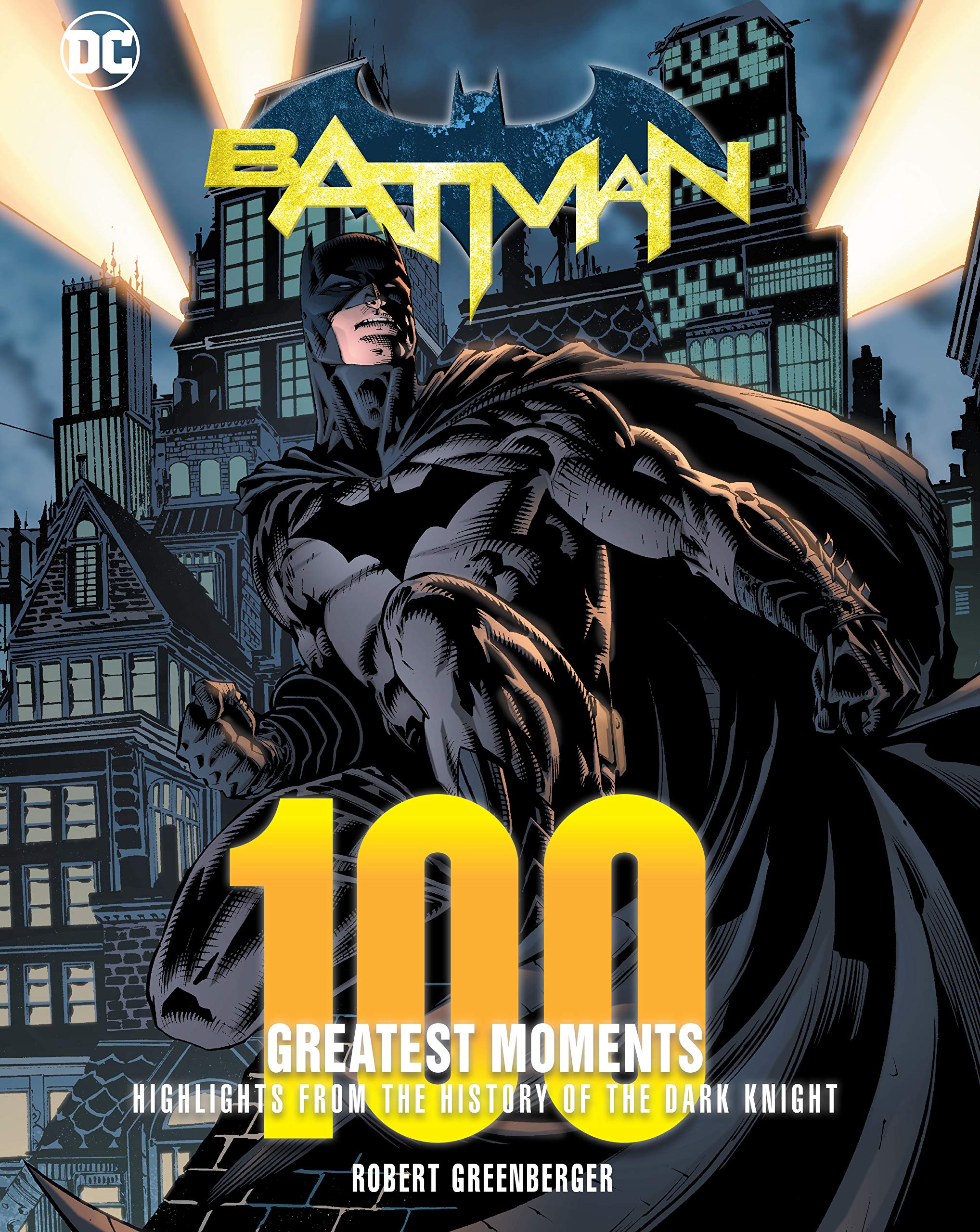 Overview: Robert Greenberger continues his look at the one hundred greatest moments retrospective series with a look at some of the greatest moments, from gadgets and origin stories to villain encounters, in Batman’s history.

Analysis: Batman: 100 Greatest Moments condenses eighty years worth of wonderful Batman history into one-hundred moments that define why Batman is such a beloved, pop-cultural icon. The cataloged history ranges from his comic book inception from the minds of Bob Kane and Bill Finger all the way up through Tom King’s eighty-five issue run on the core Batman title.

This book is divided into six core chapters. The first chapter is “Origins,” which covers the murdering of the Waynes, the introduction of Joe Chill, Dick Grayson’s origins, Batman’s first case, and the connections to Crime Alley. Chapter two, “Creating the Mythos,” dives into topics such as the Batcave, his gadgets and vehicles, and the surge in popularity as a result of the 60s television show. Chapter three, “The Batman Family,” covers key moments with Alfred, Dick Grayson, Jason Todd, Tim Drake, Batwoman, and Batgirl. Chapter four, “Allies, Friends, And Lovers” continues this focus with key moments between Batman and Commissioner Gordon, Catwoman, Superman, and other women in Batman’s life. Chapter five, “Enemies,” is fairly self-explanatory, while chapter six, “Out of this World,” zeroes in on some of the weirder Batman adventures (like the Batman of Zur-En-Arrh and encounters with Darkseid).

As on all-encompassing glimpse into Batman’s world, there are some fun, memorable moments in this book. One of the things this book does well is attribute credit to the various creators over the year who have dared to bring something new and bold to the character. Names like Dick Sprang, Gardner Fox, Denny O’Neill, Neal Adams, and so many more are celebrated as a handful of the many people who turned this pulp hero into a global phenomenon.

Batman: 100 Greatest Moments also offers answers to questions that may have plagued avid fans for some time now, such as “Who was Aunt Harriet, and why was she even a thing?” and “Was Penny Penguin’s lover or his pet?” The answer to the last question first, if author Robert Greenberger is to be believed, is a prized pet. Aunt Harriet, on the other hand, was a character introduced when Alfred was killed off in the 60s, stepping into his shoes to pick up his duties as caretaker of Bruce Wayne and Dick Grayson.

Another nice touch this book has that other Batman encyclopedias may not include are glimpses of the culture of the times, as Greenberger walks readers through how, say, Batman’s origin has evolved over the decades with society. It is in these moments when this work really shines, showing you the evolution of comics with society and attributing the many layers to Batman his scribes have added during these evolutions.

The one question this book doesn’t answer, however, is, “Who is this for?” It’s not a full history of the character, and despite including snippets from comics to supplement these “greatest moments,” it’s not a collection of full comic issues either. This book exists somewhere in the middle, serving as a more of a snapshot of moments in time, akin to a war journal of sorts.

Having said that, it’s hard to believe die-hard Batman fans would choose this over an encyclopedia, despite how informative some of the passages may be. Why? Because plenty of characters are missing from this collection, plenty of moments that die-hards seek out and gorge on as they track down every morsel of Batman knowledge.

At the same time, saying this book is for casual fans doesn’t fit either. Would casual Bat-Fans be interested in learning about the Batmania of the 60s? That isn’t pedestrian enough.

With so much on the market chronicling the adventures of Batman, where does Batman: 100 Greatest Moments fit in? It doesn’t seem like this question was considered when the book was put into publication, which is a shame because there are great ideas at work here.

Final Thoughts: This is an interesting format that has proven successful for other chronicles in the 100 Greatest Moments series, but it’s too broad and fleeting of a sweep through Batman’s history for dedicated fans.

Editor’s Note: The Quarto Group provided TBU with a review copy of this title. You can purchase your own copy by heading over to Amazon.