Queen Studios has released details for their latest collectible figure, which features both Batman and Bruce Wayne from The Batman. The one-sixth scale figure measures about twelve inches tall, and the deluxe edition features the Bat-signal. There are different ways that this figure will be made available, with the figures being sold separately, as well as the Bat-Signal. However, the option to focus on at the moment is the all-in option. This includes both the Batman and Bruce Wayne figures in addition to the Bat-Signal and a huge amount of interchangeable parts and accessories. The all-in option is priced at $990 and is expected to ship in February 2023. It is important to note that the figure is available in select countries, but we have found a preorder option for the United States through TNS Figures. Full details can be found below.

Batman is Gotham’s vengeance, a fearful sight to the dark hearted. An isolated inheritor of Gotham’s wealthiest family. Although he has be left a fortune, he constantly questions his heritage. The world’s greatest detective roams the streets at night waiting to provide retribution to the victimized and a lethal mixture of mental mastery and physical strength to their oppressors. He will bring Gotham into the light, no matter the cost. He is Gotham’s last symbol of hope.
This 1/6 collectible INART The Batman and Bruce Wayne figure is a movie accurate depiction of Robert Pattinson as The Batman and Bruce Wayne from the critically acclaimed 2022 film. Carefully crafted, using the finest materials, the team have captured Pattinson’s likeness with stunning accuracy, with both a sculpted and “rooted hair” option. Both The Batman and Bruce Wayne figures come with all of the essential accessories you need for posing. With 5 editions available, so you can order what’s right for your display and budget. Lucky collectors can also pick up The Batman’s Bat-Logo which can be ordered separately.
Price: $990
Preorder at TNS Figures 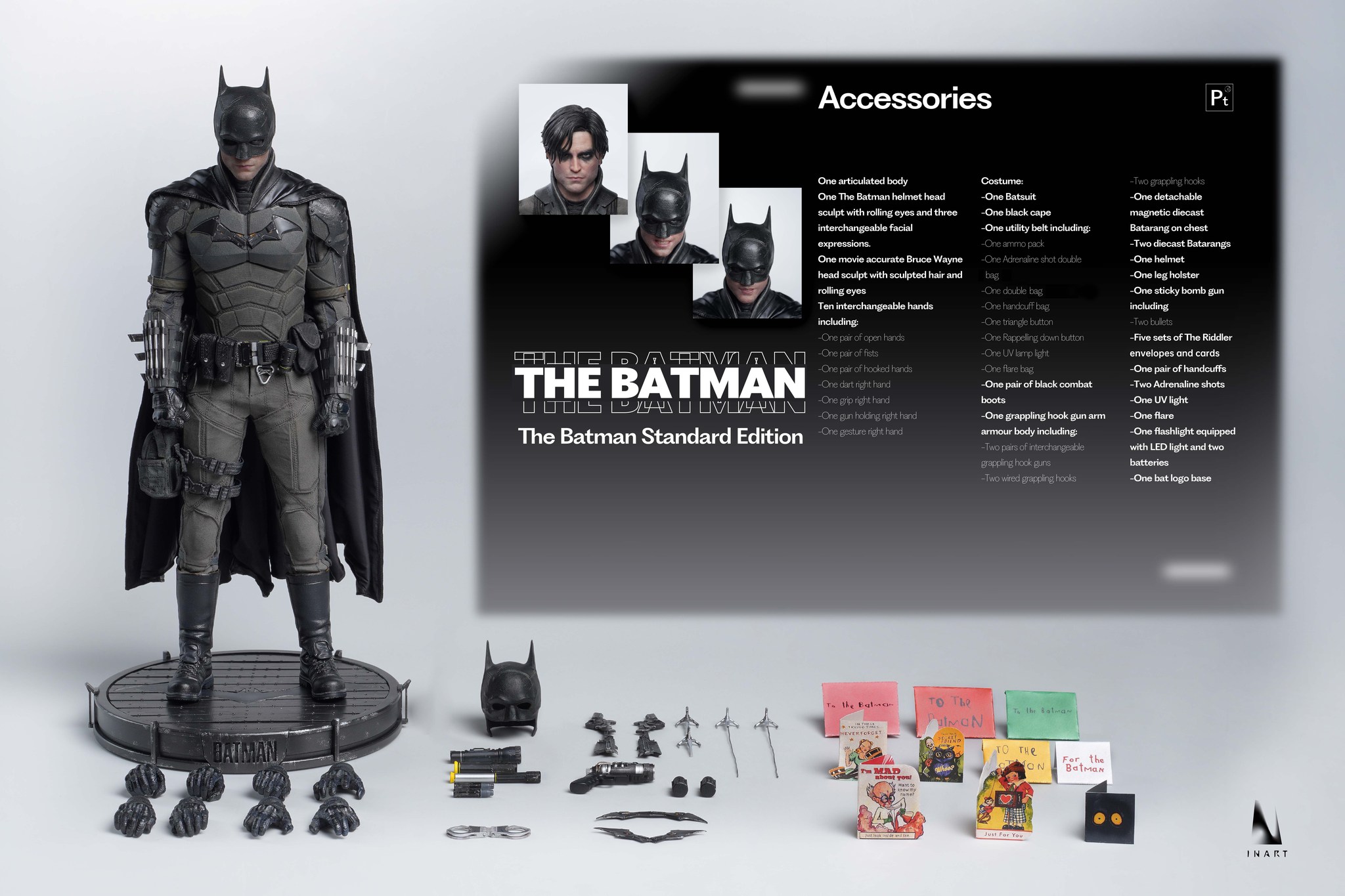 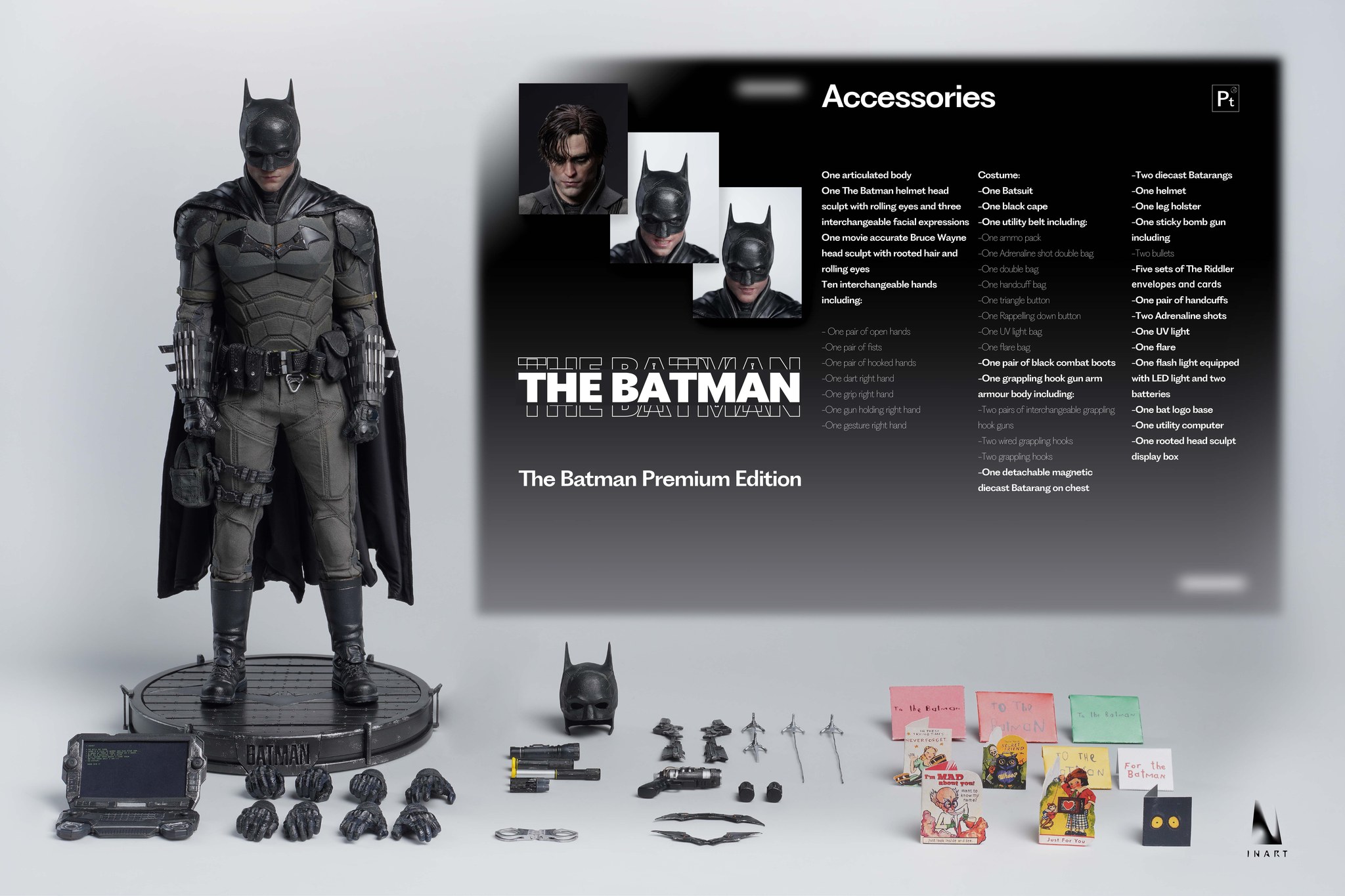 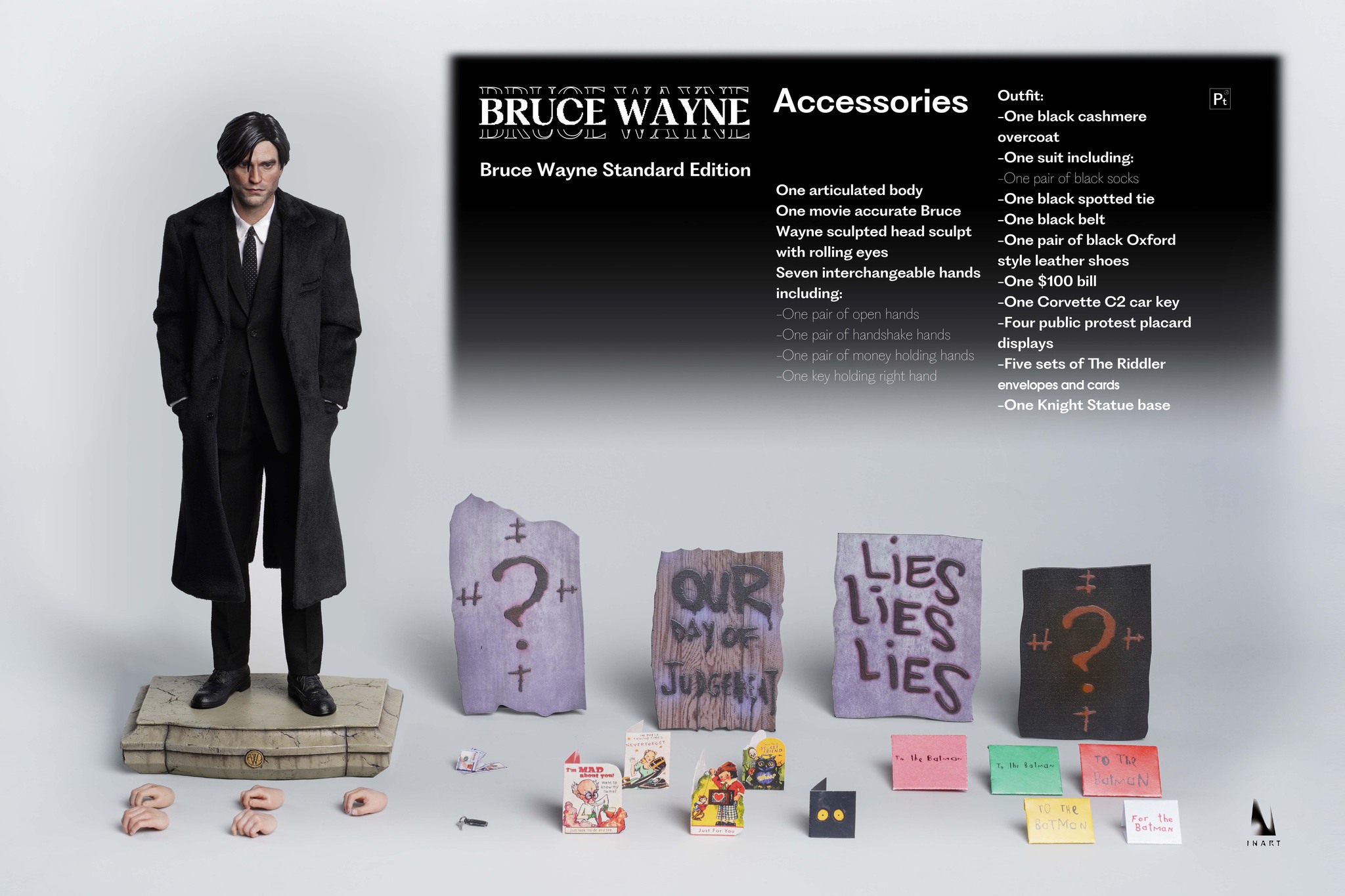 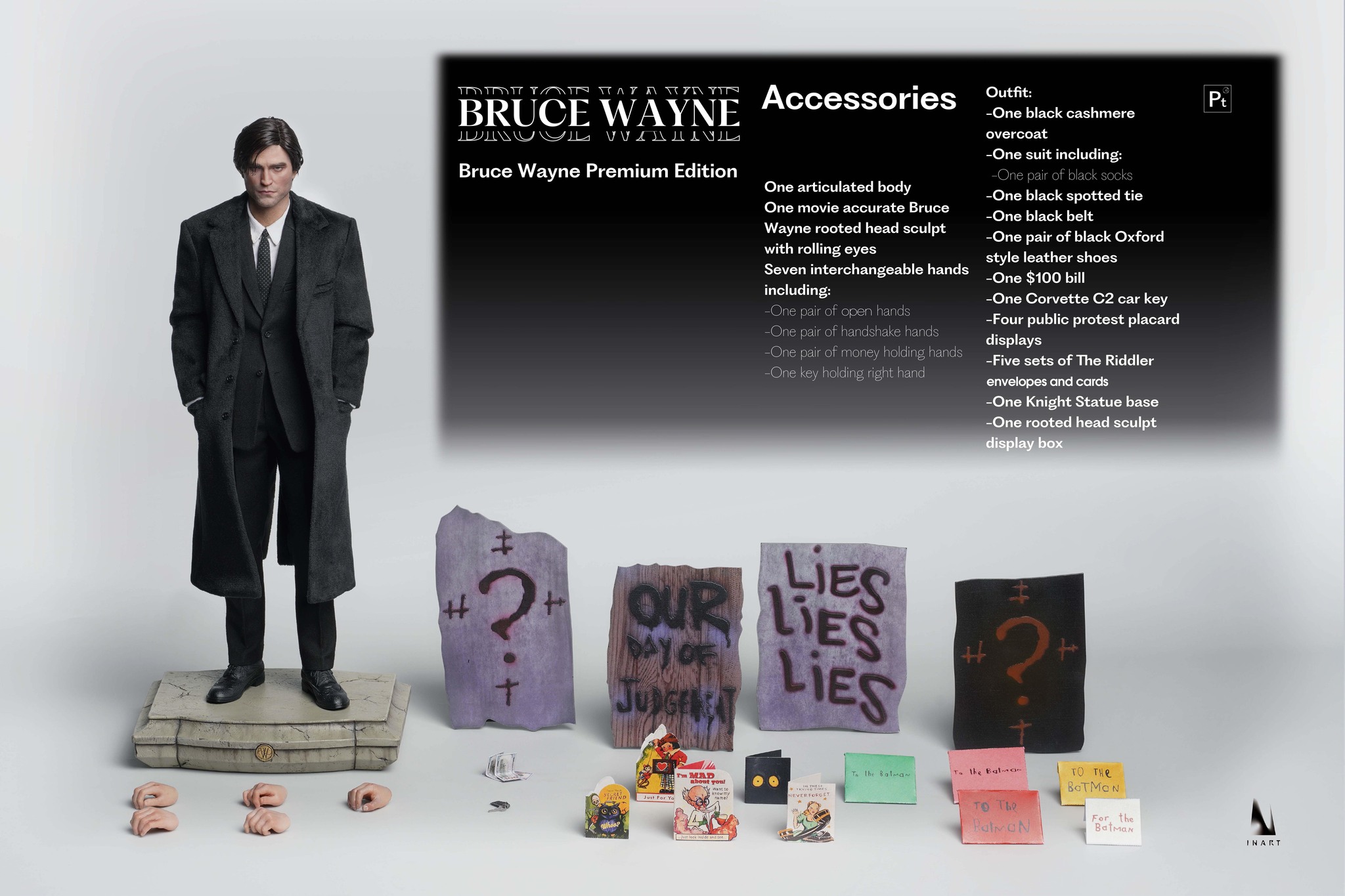 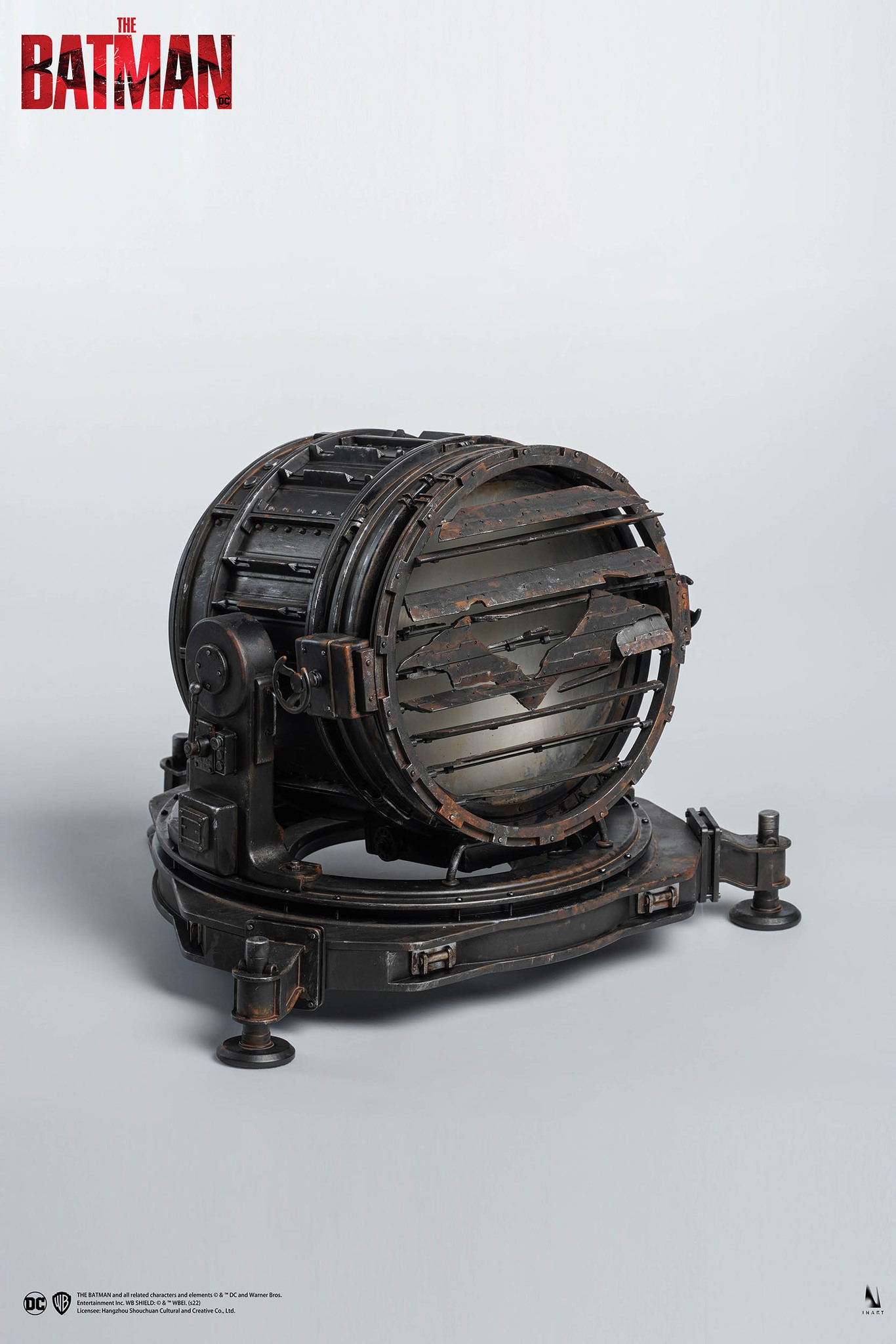