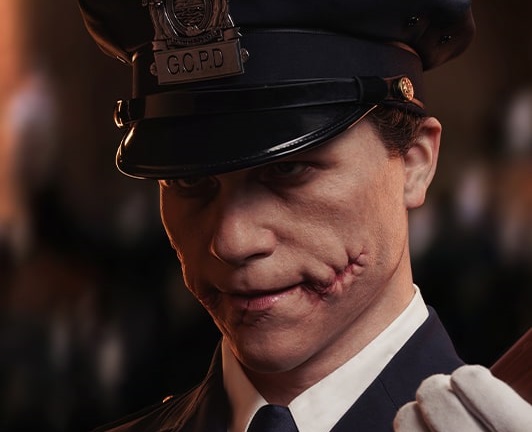 Queen Studios has released details for their latest hyper-realistic life-sized bust, which features Heath Ledger’s Joker in the police uniform as seen in The Dark Knight. The statue measures about thirty-four inches tall and features platinum silicon skin, tooted hair, hand-tailored fabric clothing, and a polystone rifle. It is priced at $3,980 and is expected to ship 2nd Quarter 2023. The statue is currently extremely limited with an edition size of 199. It is also only currently available to select international countries. If you are in one of the specific countries, you can preorder the statue directly from Queen Studios.

The Joker has single-handily brought Gotham to its knees. Why does no one notice The Joker at Commissioner Loeb’s funeral at City Hall? He is an agent of chaos. A man who cannot be bought. He is Batman’s only adversary who truly got the upper hand. Granted the Bat sent him to Arkham, but at a very high price.

This Queen Studios’ 1/1 life-size scale bust of the Police Uniform Joker stands at 87cm tall. Compared to Queen Studios’ other hyper-realistic Joker statues; this life-size Joker Bust takes the likeness of Heath Ledger to another level. This bust captures the Joker moments before he tries to assassinate the Mayor of Gotham at City Hall. The Joker isn’t wearing his usual clown make-up. Instead, he is clean-faced with his Glasgow Grin stretching from ear to ear. Disguised in a GCPD uniform, he’s holding a standard-issue M1 Garand semi-automatic rifle poised and ready to fire.