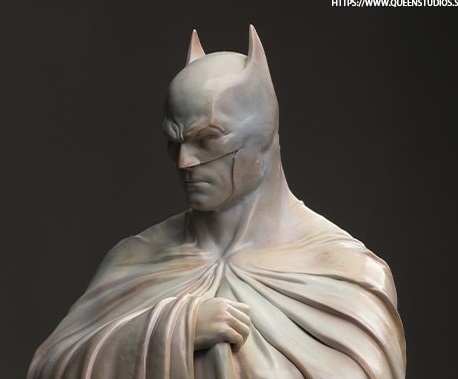 Queen Studios has released details for their latest Museum Line statue which features Batman in a unique art piece pose. The one-fourth scale statue measures about twenty-four inches tall. It also features a plinth mount and is textured and designed to feel and look like marble. It is priced at $325 and is expected to ship during the third quarter of 2022. The statue is exclusive to certain parts of the world, but you can check if you can preorder it by heading over to Queen Studios.

To avenge his murdered parents, Bruce Wayne has declared war against every criminal in Gotham City. He is the night, he is justice, he is Batman. Batman is one of the most popular characters within the DC universe, a symbol of justice and all that is right. Ever since the tragic killings of his parents, the Batman has vowed to keep the streets of Gotham clean. And this Queen Studios’ Museum Line Batman 1/4 scale statue pays tribute to one of the most incorruptible characters ever created.

This Museum Line Batman 1/4 scale statue is licensed by DC and stands at 60cm tall. The Batman is stood proud, shrouded underneath his cape, waiting for the terrors of the night to appear. He is stood upon a plinth, like that of an Ancient Greek statue or bust. The texture of This Museum Line Batman 1/4 scale statue is made to resemble and feel like carved marble.