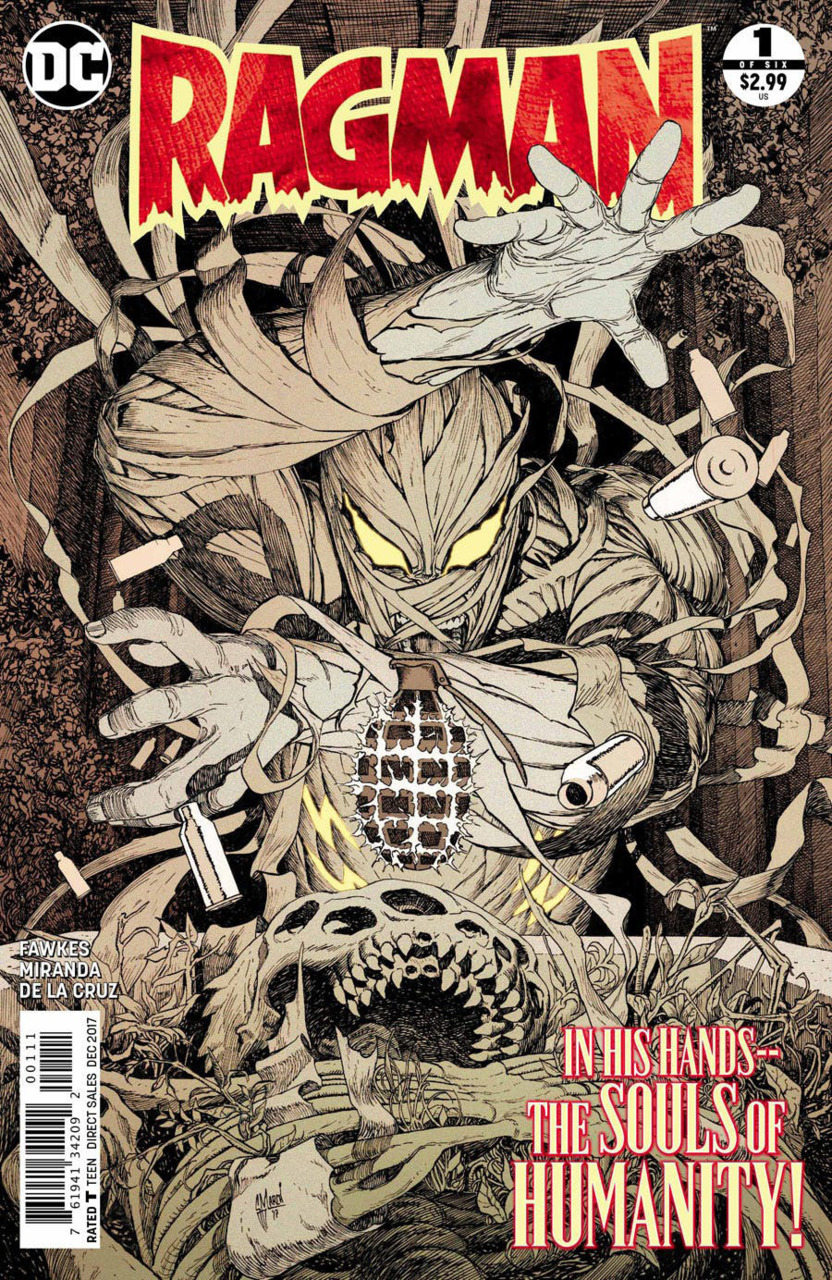 Overview: Rory Regan’s origin story gets retconned and updated here in this first issue of an all new exciting miniseries about Gotham’s new Tatterdemalion of Justice, Ragman.

Synopsis (spoilers ahead): Our story begins six months ago in the Israeli Desert. It is here that we are introduced to our main protagonist, Rory Regan. It is unclear whether he is in a special forces unit of the U.S. military or why the group is overseas in the first place. We find out that our service members are in a holy temple which is strictly forbidden from their mission parameters and trouble will follow if they are found out. We are led to believe that the team is on the trail of something that has the potential to score them some serious cash.

Abruptly, the scene changes to present day Gotham City at a support meeting for veterans discussing their mental trauma. Things start to get a little intense as one of the vets begins to describe his unusual dreams.

We are then taken back to Rory’s time in the Israeli Desert where the army unit is able to locate what they perceive to be the treasure. It turns out that wasn’t exactly true. In fact, one could say that they weren’t alone in that temple. The entire team, with the exception of Rory Regan, meet their demise at the hands of the entities within the temple.

We shift back to the present where we are introduced to Rory’s dad who inquires to where his son had gone after his meeting. We get to see the home and business of the Regan’s, which is affectionately referred to as Rags ‘n Tatters. Rory’s dad is worried for his son and it’s apparent that Rory is having difficulty readjusting to civilian life. As Rory goes through some old pictures, his mind flashes back to a recent birthday party he attended for the child of one of his fellow soldiers. He remembers talking to his buddy’s widow and the loud bang of the child striking the pinata which triggers the memories of his friend’s slaughter.

It is these memories that reveal that the treasure Rory and his teammates were seeking were in the suit that Rory brought back with him. Voices come from the suit that begin to guide him. Rory goes about the streets of Gotham and is able to stop a crime in progress, though he’s visibly freaked out by the suit’s abilities. The issue ends with the reader learning the fate of Rory’s fellow servicemen and the destruction of Rags ‘n Tatters. Rory’s father is taken by two demonic entities who have a particular interest in Rory’s new found suit.

Analysis: We are off to a great start here with the reintroduction to the Ragman character. Writer Ray Fawkes does an excellent job of setting the table for this series. I especially liked how he seems to have a good grip on the Rory Regan character and the history of the character’s bouts with combat-related post-traumatic stress disorder. This is a subject that is often overlooked in comics and is an important issue today among veterans. The sights and sounds that Rory experiences in this issue draws attention to this for the reader.

This issue also points out a new feature not used in previous continuity, in that the suit that Rory wears contains the souls of innocents and not just the evil-doers. I’m sure that this will add a new layer and dimension to the Ragman character. The art team also does an exceptional job in reinterpreting this somewhat forgotten hero of yesteryear.

Final Thoughts: This was a quick read and I’m already looking for the next issue.