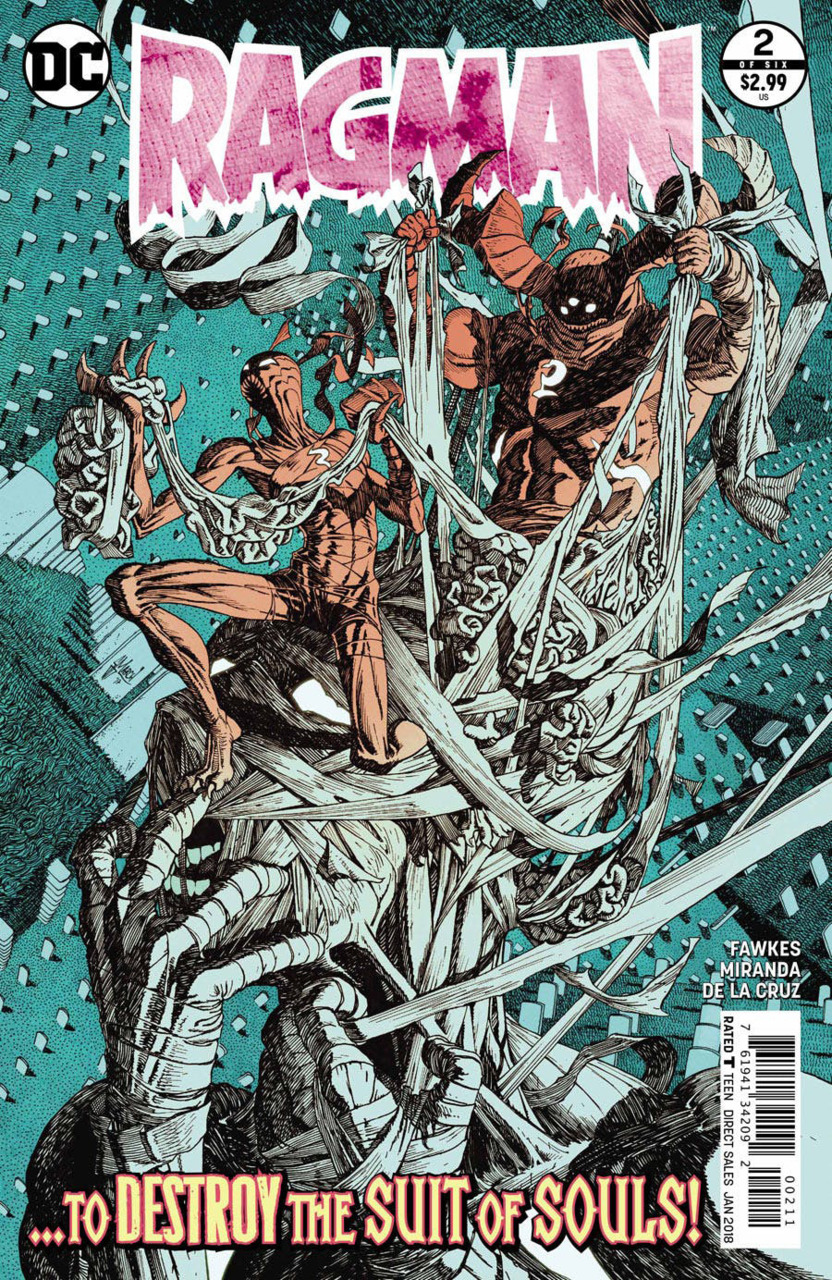 Overview: Overcoming severe PTSD, Rory battles his demons (literally) and saves his father… and possibly all of Gotham City.

Synopsis (spoilers ahead): We open with Rory hallucinating. He sees hell, a veteran cemetery, then he’s back talking to his therapist. He is asking him pointed questions, attempting to draw out a particular answer out of him. He looks to his left to see the horror of his squadron all shot up and bleeding out. His best friend urging him to answer the man’s questions. His therapist gets impatient, and his eyes flash a golden amber for just a moment. It’s not much, but it’s enough for Rory to realize that this isn’t real. In reality, the therapist is sitting in his office, when one of his clients shows up and admits that he may have done something wrong.

Meanwhile, Mandy (his best friend’s wife, in case you don’t remember from first issue) is leaving Rory a message, needing to talk to him. She is interrupted, though, by her son. He’s awake now, he had a bad dream and there were monsters.

Finally, Frank (Rory’s deceased best friend) reaches out to Rory through the cloak . He lets him know what’s going on, and that he needs to do something. Rory comes to, and sees two otherworldly beings. One of them, trying to release the bind that the cloak holds on Rory to take it for itself, and the other is killing firemen and police officers. Rory quickly takes the two beings out, and saves his father in the process.

Rory wakes up in the veteran cemetery still in he cloak. He talks to Frank, who informs him that using powers uses up the souls trapped in the suit. He’s going to need more, if he continues to use them, and eventually, he’s going to have to use one of his friends. Rory tells him he’ll never let him go. Frank tells him that more of those things will come for him. Rory says he’ll be ready.

Analysis: Raw Fawkes did an excellent job with the tone in the first issue. I didn’t develop a connection to Rory, but the psychological horror was a perfect vibe for the book, and one that could lead to sympathizing with Rory. This issue still didn’t give me reason to care about Rory, and it seems to have lost what it was already. It has moments, like when Rory is hallucinating, where it really taps into the genre that could make this book stand out, but then it turns into a cheap action horror/slasher that makes me loose all interest. I don’t care about Rory, and that’s because I know so little about him. And in a six issue miniseries, it’s important to make the main character relatable right away. Rory is boring. He needs some personality. The pacing in this book didn’t work for it either. Once it jumped into the action scene, it lost everything that made it special. The plot felt thin and we had no character development, leaving it only to be described as filler, as in nothing substantial.

Inaki Miranda’s art is extremely interesting and engaging during the slower moments. He plays with the layouts and is very imaginative in his camera shots. However, once the pace picks up, this book quickly looks and feels boring. I couldn’t wait for the scene to end, so we could get some more interesting storytelling. I also feel like his lines are too clean and don’t match the tone quite right; like it’d be a better fit if the art were a bit erratic and raw. Sometimes, things even look photoshopped, which take me out of it. This book could be better if the team would have figured out what they excelled at before moving along with the project. Also, I’m not one to criticize new looks, but Ragman’s classic look is better since it actually has a cloak.

Eva de la Cruz’s colors establish a fantastic mood for the most part. Saturating the page in eerie greens, deep blues, and glowing reds give this book the creepy vibe it needs. Where she suffers, again, is in the action sequences. Instead of the brilliant single color dominated pages throughout the book, we get bright, vibrant colors that clash with each other. Blues and purples clashing with oranges and yellows; it just looked awful on a single page. Josh Reed letters this book and does a fine job. I’m not crazy about the balloons when Frank is talking to Rory. You can’t tell it apart from when another soul in the cloak is talking to Rory, and the look just kinda gets played out.

Final Thoughts: While the first half continues the trend of last issue, the second half quickly sinks the issue. I’m not high on this book right now, but I see potential in this team and have confidence that they can right the ship.