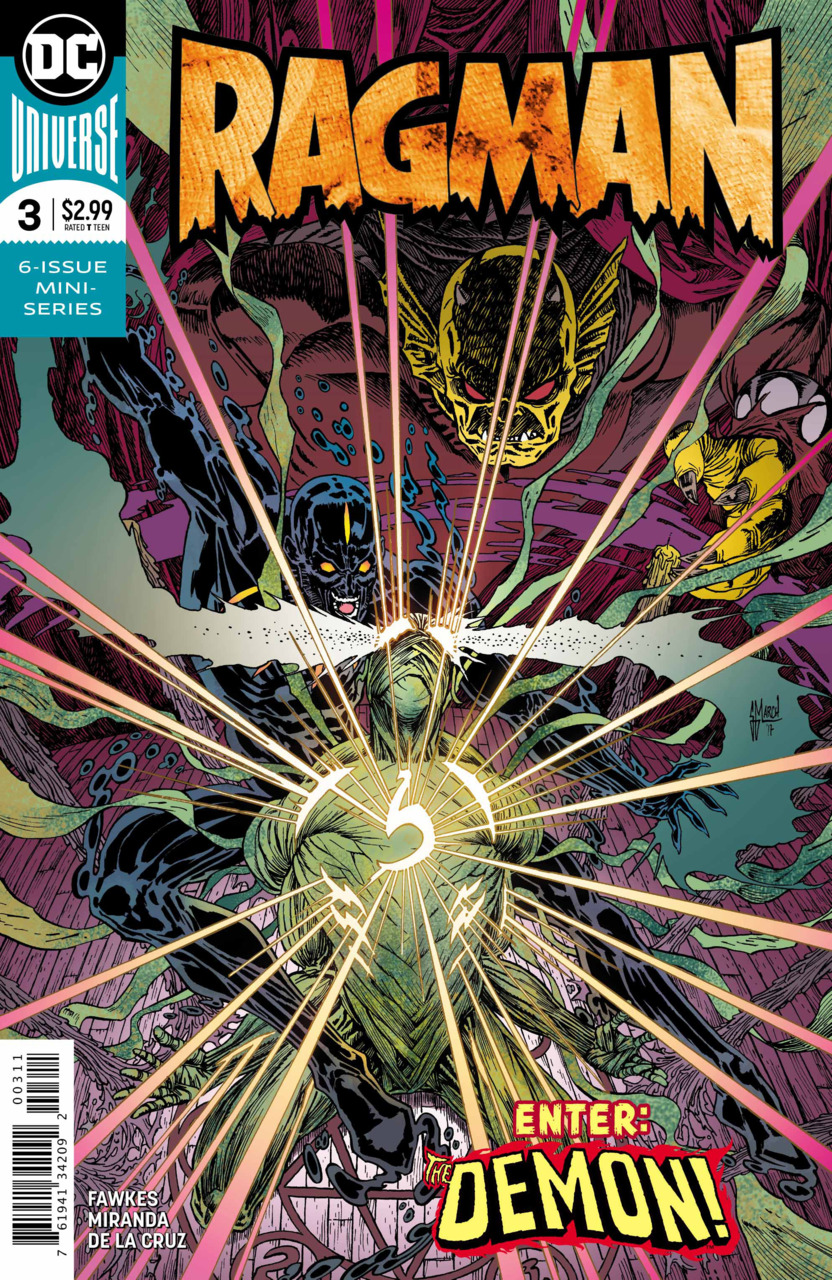 Overview: “I don’t need your help”,
Says the Ragged Man
“You do too, welp”,
Responds Etrigan.

Synopsis (spoilers ahead): We open in Gotham Mercy Hospital with Rory watching over his father. Rory opens up to him, telling him that he came back home from one war and jumped right into another. We are shown a collage of Rory fighting demons throughout the city. He comes across Batwoman, who tries to determine if he is a threat or not. She recognizes that he has military training and the two relate to each other in that sense. She asks if he needs help, but Rory tells her that he has to do this on his own. She informs him that “they” are watching him, and she leaves.

Six months ago, a secondary team is in the desert to give Rory’s team backup. However, because of a sand storm, they have trouble seeing. They hear the gunshots that are slaughtering the team, and they pick up the pace. But, the captain, Fanshawe, steps on a mine. He awakens, but sees that he is missing both his legs. His name is called to from the darkness. A demon gives him an offer.

Currently, Rory finds another demon in an abandoned building, who leads him to another demon in another abandoned building. This one is preparing some sort of ritual. Just as Rory breaks it up, he is attacked by Fanshawe, who’s skin is now toxic. Fanshawe goes to his signature move in the military, and blinds Rory, who he blames for the loss of his legs, but thanks to his new abilities he has legs as well. The demon helping Fanshawe tries to complete the ritual to bring their Lord to our world. He notices something is wrong though, and someone else comes through instead… that being Etrigan.

Etrigan helps Rory, telling him to use “true sight” and this, along with a tip to fight him from the inside, helps him to overcome the fight with Fanshawe. Rory is hesitant to trust Etrigan, but he takes Rory to the rooftop. The city is seeping with evil. Rory decides to find out if he can trust Etrigan later. There are people to save.

Analysis: This issue is like the previous. The slower moments work very well for it, but the action beats are what drag this book down. Ray Fawkes excels so much at the more quiet moments, it makes the horror more suspenseful. Taking a more psychological approach to the series would be so much more interesting and unique to DC, I feel like it would bring more to the universe. Do we seriously need someone else running around, punching demons in the face? We could get that with countless other DC characters. Doing this with Ragman doesn’t make me interested in the character or Rory. In fact, we are three issues in, and I know very little about him. I know he was a marine. I know the mission went wrong. I know he was the only survivor. I know he loves his dad. And I know he’s Jewish…that’s it. He lacks personality. It’s this lack of a voice and lack of character depth that kills this character. In contrast, his writing of Etrigan is oozing with personality. Yes, he has the rhyming thing, which helps, but you see what that does for the character? I’m just not feeling it. I don’t care if I find out what happens next and that’s a problem.

Ianki Miranda’s art is hit and miss. At times, he reminds me of Jeremy Haun, being very precise with his inks. I still hate the Ragman design. It doesn’t look good, and it’s hard to follow when in action with ribbons all over the place. His Etrigan, though, is amazing. You could tell he loves drawing the guy and I had fun reading the scenes he played in. Eva de la Cruz’s colors are extremely well done on some pages and hard to look at in others. Her colors in the slower scenes flow much better and establish an eerie tone. But she can’t seem to figure out what to do with the action sequences. Especially with the different lighting of the city. It just has too much going on and the colors seem to clash and yet blend together at the same time. Another thing I have to give her credit for, is how she gives things the appearance of glowing. They genuinely look as though they are glowing off the page. Josh Reed letters this, and although I appreciate his font choices, as it helps give a voice to the characters, I hate the dialogue. But I guess that is on Fawkes and not Reed, but I feel like I should talk about it here. The demons speak in old English. And although I know that this establishes a tone, that tone does nothing if I don’t understand what is being said. Tone it down some.

Final Thoughts: I know Ragman has a very small, very loyal following. I just wish those fans could be excited about what this book is.