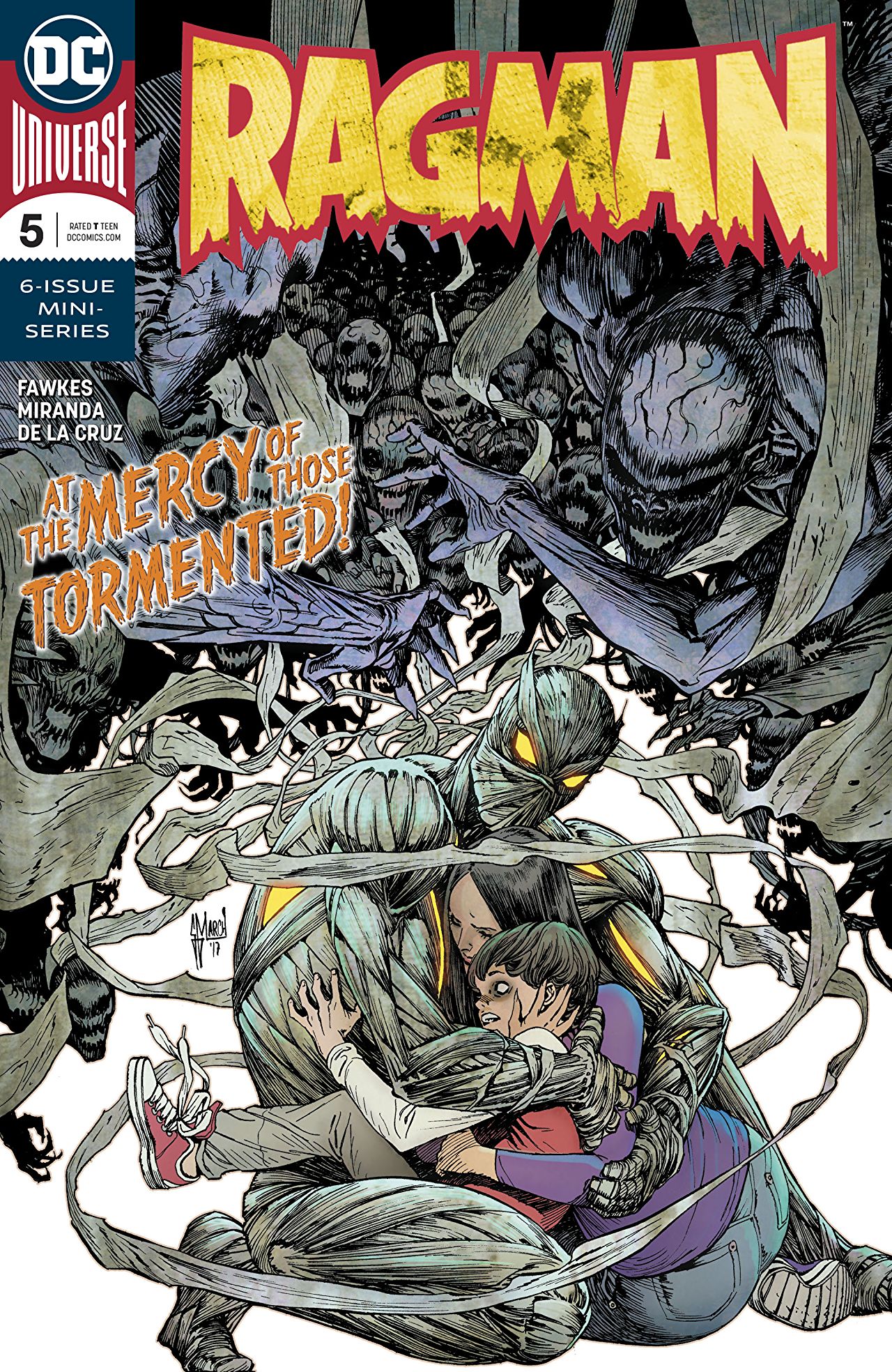 Overview: Rory should have listened to the advice of Karen Dang: “Don’t make a deal with the devil. If you do you will lose something important that you once had.”

Synopsis (spoilers ahead): This issue opens with Rory in the house trying to calm a possessed Frank Jr. down. A fiery tornado engulfs the house and Rory shields Frank Jr. and Mandy from the worst of the carnage.

Down the street, Etrigan looks upon the house. As the explosion happens, Etrigan gets attacked by a warrior named Ystin. She pleads with Rory that Etrigan is playing him.

At that moment, the true evil of this series, The Demon, enters the fray. Rory attempts to fight the mind-controlled goons in the street, but he quickly realizes he cannot grab their souls. Frank, from inside the suit, warns Rory that Frank Jr. is being taken away by the goons. Rory grabs Mandy and Frank Jr. and protects them in a cocoon of rags.

We then learn as Etrigan and The Demon converse, that there exists a decree in hell that if they fight each other head on, then the loser has to stay in the other’s domain (plane of existence). Rory does not want to fight the goons for two reasons: He does not want to use the souls of his platoon and he does not want to make The Demon stronger. (Evidently, the more he fights the stronger the enemy gets.)

Rory chooses to make a pact with The Demon: if The Demon leaves the conflict and releases Rory’s platoon from his rags, then he will give The Demon the rags. The Demon agrees but then stabs him in the chest.

Analysis: Hmm. Where to begin? I could not engage at all with this story. I still have no clue who Ystin is or how she knows Etrigan. (She makes a comment about Camelot, but that is it.) I have no clue who the big bad Demon is or why he wants Rory’s rags except for that they came from hell, to begin with. I am not hating on this issue because I dislike Ragman, I really wanted to like this issue. But as a fan of comics, I have some serious reservations about this issue and miniseries as a whole.

In the fifth issue of the series, I thought that story would be in its climax. Yet, this issue was the most discombobulated and incoherent than the other four issues. We are still reading how Rory thinks he is not a hero and that he should have died instead of his friends. I completely believe that Survivor’s Guilt is real, and I am NOT saying it is something you get through in an hour of group therapy (for many survivors, this takes years). I just thought that since Rory is a soldier and he hears his buddy, Frank, pleading with Rory to protect his wife and son that Rory would be in heroic mode. We have seen in this miniseries that Rory cares deeply about his friend’s family; I would have thought that Rory would be more eager to protect the innocent than wallow.

This issue blunted all momentum that this miniseries had (which was not a whole lot). I hope that the finale answers all these open questions, and I hope we see that Rory is able to move on from his guilt and become the hero that Frank’s family and Gotham deserves.

To end this review on a high note, I really love the art. A lot! The creative team of Miranda, De La Cruz, and Reed did a fantastic job. Ragman looks awesome and The Demon looks terrifying (in the coolest of ways). Each character was drawn crisply and cleanly. I still do not understand how Miranda got so much detail on Ragman and The Demon in their panels!

From the subtle rain in the town to the choice of color palette and saturation in the scenes of Ragman vs Etrigan/Ystin vs The Demon, De La Cruz should receive a gold star for this issue. I hope she is able to get on a bigger book after this series, I really like her colors and approach.

Final Thoughts: The art was beautiful while the story was lackluster. Thankfully, the end of this miniseries is coming soon.