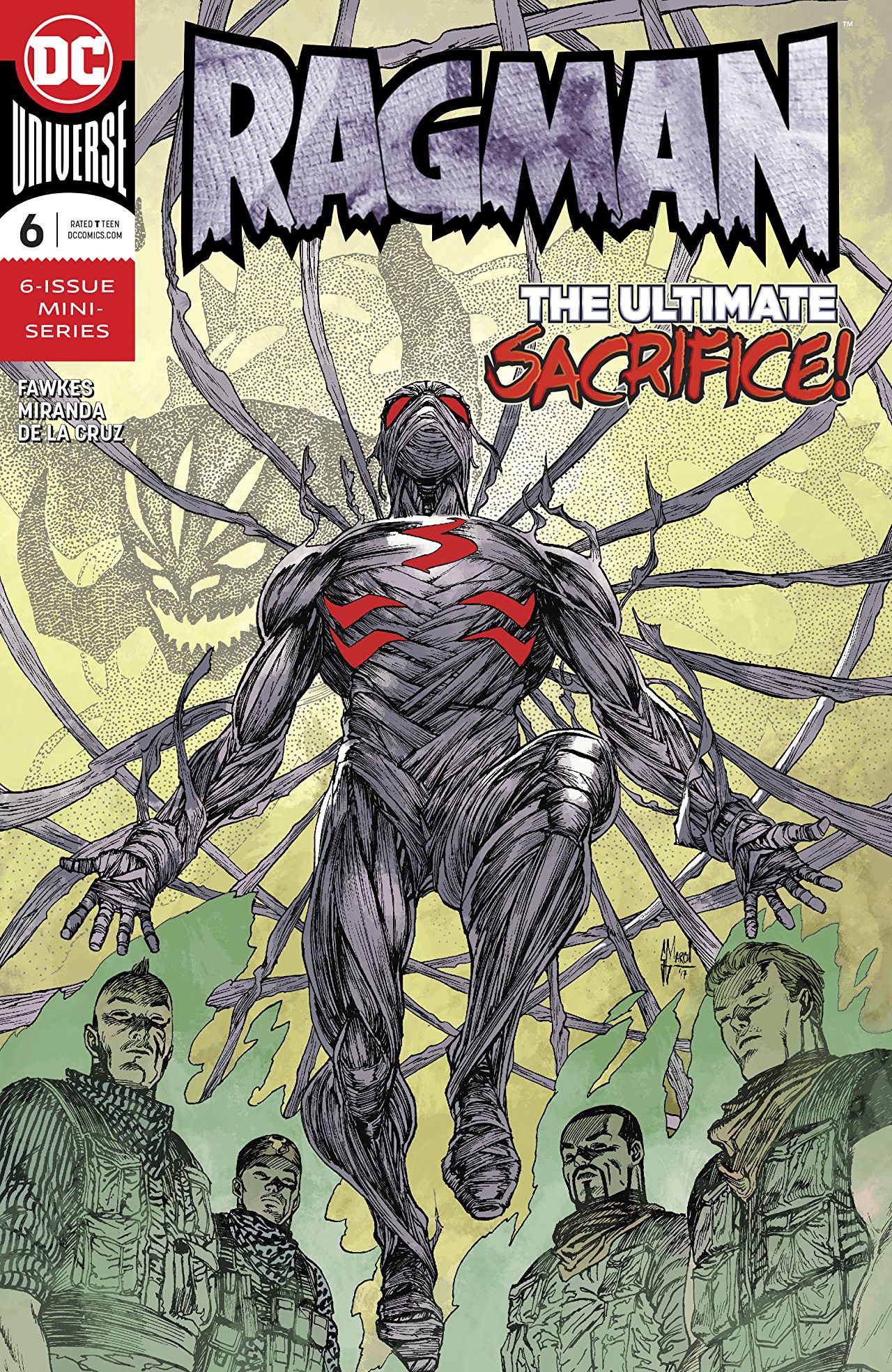 Overview: Rory’s unit makes the ultimate sacrifice to save the day.

Synopsis (spoilers ahead): With Rory unconscious in his suit, his fellow soldiers encourage him to get up and continue the fight. Rory, emotionally defeated, tells them that he should have been the one to die because he does not have it in him to do what is necessary. They hold him down and force him to look at the ensuing battle and the innocent townspeople still in harm’s way.

The Demon has Rory by the suit and demands that he relinquish it due to his deal. Etrigan, stubborn as ever, engages a fight with the Demon. He knows that according to the rules of Hell, that one of them must win and the loser has to stay in the domain of the victor forever.

Rory’s unit tells him that there are “no quitters in this unit.” Rory still thinks that he is outclassed and the battle is over. Frank implores him to fight, not just since it is the heroic thing to do, but because he needs Rory to protect his son and wife. Rory needs to win at all cost, even if it means that he has to use the souls of his friends.

With that pep talk, Rory gets over himself and rejoins the fight. He covers himself, Etrigan, and the Demon inside a rag-dome so that no civilians may be hurt. Rory then attacks the Demon, with them being evenly matched. With the encouragement of Frank, Rory uses his friends’ souls and impales the Demon with his rag-constructs. With the Demon dead, the townspeople are free from his mental control, and Frank’s family is safe.

The series ends with Rory being the leader of a veteran’s group that helps veterans reintegrate with society. He also finally understands his place and embraces saving others.

Analysis: This issue redeems the last issue and then some.

I did not like the plot so much as Rory’s growth in this issue. His fight with the Demon is incredibly short; I felt that we should have gotten a longer fight or that this story should have concluded sooner because he ends the conflict in just one page. Essentially, the plot was stretched to fill a six-issue miniseries; which hurt the overall story.

However, with all my complaints for the plot and pacing of this miniseries, Rory’s triumph over his survivor’s guilt is the redeeming quality of this series and also the highlight of this issue. I feel that this issue shows how hard it takes for veterans to overcome their guilt and loss of their friends in battle, and live free from those demons.

Rory began as a scared man who felt that he had no reason for living. Even though he was central to the goals of the Demon, he was this reluctant hero because he was at the right place at the right time. When it was time to stand and fight, Rory once again tried to lay down and quit. It took his commander and his unit to drag back into the fight.

Veterans who return home do not talk about their experiences. Not having served myself, I do not have firsthand knowledge of their struggles. But, I see the effects of their return. Many have struggled with sleeping due to nightmares. They have issues becoming calm due to them staying in the flight-or-fight response. Many feel guilty for surviving or outliving their comrades. And to make things worse, their government forgets them. The VA is woefully underfunded and veterans are not given the support needed to reintegrate into society.

I feel that this miniseries, for all its hiccups, sheds light on the suffering of veterans. It shows their mental state, issues that they have to overcome, families struggling to help them, lack of resources, and what it takes to allow them to heal. This issue shows Rory’s triumph.

I can definitively say the art is the best part of this book. I still cannot believe that each scene that took place outside had this subtle rain. It felt as if the art team created all those panels and then added the rain; but, it is in such a way that adds to the art and does not seem last minute or rushed. Eva de la Cruz’s colors were once again superb and the pencils for each character, especially Rory and the Demon, were extremely precise. I hope this art team is able to go to a bigger title. I would love to see them in Detective Comics. I feel that their skill set would be perfect for that book.

Final Thoughts: Overall, it is a good conclusion to an underwhelming series. I appreciated how this series dealt with veteran’s issues, but it struggled with a coherent plot and the pacing was abysmal. Although I feel this miniseries underperformed, I feel that this is a good re-introduction of Rory Regan into the DC Universe.