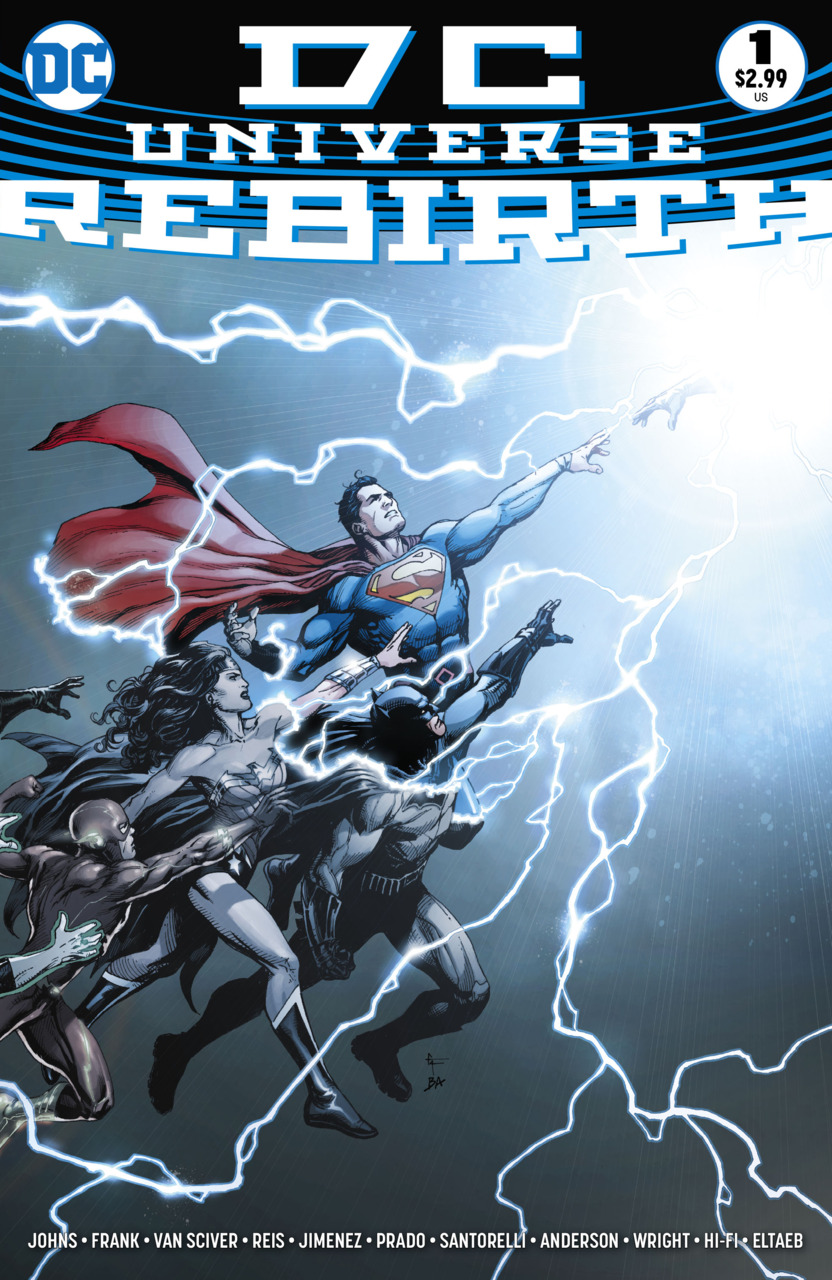 In Brief: Wally West travels throughout the DC Universe, searching for someone who remembers him so he can deliver a dire warning.

Chapter 1: Lost- Wally opens the story narrating over images of the watch handed down to him by his family, telling us that he used to have hope, until the watch broke, and he lost time. He then says “everyone did,” introducing the central mystery of the issue – someone has stolen time.

The view then switches to the Earth from space, and the line Geoff Johns revealed when Rebirth was announced: “I love this world. But there’s something missing.” He gives us a quick recap of his origin – lonely among his family, meeting the Flash, becoming a hero, having a “lightning rod” in his love Linda Park.

Wally then sees Bruce Wayne in the Batcave, searching for news of Superman after the confrontation with Doomsday. Batman also muses about his recent discovery that there are three Jokers. Wally hopes the World’s Greatest Detective can solve the mystery of the missing time. The destruction of Darkseid has allowed him to attempt contact with reality, even though this attempt is very costly. In a scene very similar to the Flash’s warning to Bruce in Batman v Superman, Wally appears in a tangle of Speed Force lightning, and begs Bruce to remember him. Batman cannot, and Wally is reeled back into the Speed Force, shouting for Bruce to remember Thomas Wayne’s letter. As he leaves, he remembers more details about his origins – meeting Barry Allen, the Flash, gaining his powers, joining the Teen Titans, taking the full mantle of the Flash, Barry’s return, and then…Flashpoint. As the world recovered from resetting the timeline, someone stole ten years from everyone’s lives.

Chapter 2: Legacy-In a retirement home, an old embodiment of the Speed Force named Johnny Thunder, is Wally’s next attempt. Unfortunately, the old man’s sanity is questioned by an ignorant public, and so Wally can’t break through to him. Meanwhile, a young woman tells Maggie Sawyer and the police that she’s seen the future. Ryan Choi, assistant to Professor Ray Palmer, discovers that his teacher’s absence is because he’s been trapped as the Atom shrinking into the Microverse, and needs Ryan to take his backup shrinking tech and rescue him. Ted Kord assists young Jaime Reyes with their shared identity as the Blue Beetle, and Dr. Fate tells Kord that Jaime’s implanted Scarab is magical, not technological. Damian Wayne, Robin, turns 13, as Jessica attends to her duties as a Green Lantern, and Jackson acknowledges his identity as Aqualad.

Pandora, one of the major symbols of the creation of the New 52 universe, flees desperately from an unseen threat. She references the myth of Pandora, who opened the box containing all evil, and specifically says that she unleashed the nihilistic worldview of her pursuer, but when everything was over, there was still one thing left in her box: hope – specifically, the hope that superheroes provide. Her words prove her last, as the force obliterates her in a gory blaze of blue light, leaving a speckled pattern on the snow.

Chapter 3: Love-Wally continues observing, as an evil looking woman holds an infant (containing Darkseid in some form) and speaks of Wonder Woman’s twin brother Jason. Wonder Woman herself mourns the death of Superman along with all the other heroes, and Wally muses about Black Canary and Green Arrow – who both feel like they know each other, but have never met. Elsewhere, the Superman transported to the New 52 universe in Convergence along with his wife Lois Lane and son Jon observes the death of his double. A hooded figure calling itself “Mr. Oz” tells him that nothing is at it seems, and Wally shifts away to watch Aquaman propose marriage to Mera, leading to a great joy in reality – something happening the way it should have happened before.

Then – he sees her. Linda Park. His love, lightning rod to reality – and tries to reach her. He appears among the lightning, but even though he manages to tell her his name, she doesn’t know him, and he vanishes again, completely heartbroken.

Chapter 4: Life-Wally tumbles through reality, flashes from Gotham, where a mysterious duo looks at the Bat-signal, and the swamp where Constantine and Swamp Thing join forces to raise Abby Arcane, Captain Boomerang in prison, Vic Sage and Dick Grayson, former teammates, and his cousin, also named Wally West, who is also a member of the speed force.

Caught between hope and despair, he finds Barry Allen, the man who started the whole problem. Wally appears, gives his mentor the message about Batman’s letter from the Flashpoint version of his father, then thanks Barry for everything. As he is about to allow himself to disappear forever, Barry reaches out and says his name. With a titanic struggle, Barry and Wally pull themselves into reality, and the two Flashes embrace. Wally tells Barry that the lost time and relationships aren’t the Flash’s fault, but someone else’s.

Epilogue-The Earth. Mars. Wally’s family watch falls to the red dirt, then floats, is invisibly disassembled, the individual parts reformed, and reassembled. As the hands begin ticking backwards to a quarter to midnight, two voices: “I did the right thing, didn’t I? It all worked out in the end.” “In the end? Nothing ends, Adrian. Nothing ever ends.”

In Depth: Five years ago, DC Comics rebooted its entire line of comics. No matter how many times the company tells us that it wasn’t a reboot, the universe and character fundamentally changed in nearly every aspect. At the time, there were good reasons to reboot – soft and falling sales, a general sense of impenetrable continuity, and event fatigue. However, there was virtually no demand from the fandom that a reboot happen, especially since the various Crises that happened every few years rejiggered the universe enough to give new readers a place to jump on. This lack of community support for the reboot has led to a general feeling of discontent with the comic universe as a whole, though some titles have gained a measure (some huge, some small) of support.

This year, DC seems to be explicitly reaching out to the readers who have consistently said that the New 52 was poorly handled and/or unnecessary with their Rebirth event. A relaunch that promises a certain amount of restoration of things that Flashpoint stripped away, the event seems much more fan-oriented than the New 52 launch – which may strike some as exciting, and others as desperate. Whatever the outcome, though, this launching issue provides much food for thought.

Geoff Johns provides much of it to start with. He writes a strong emotional story of a man lost in the universe, striking out bravely to try to come home, and finally making it. The hints of the stories to come are reasonably well handled, and the overall mystery ending in the reveal of Dr. Manhattan from the legendary story Watchmen as the architect of the New 52’s nihilistic tone is a very intelligent choice, both in-universe as one of the only beings powerful enough to do just that, and out-of-universe in the way the 1980s “Dark Age” spawned by Watchmen and The Dark Knight Returns has pulled comics inexorably towards a sticky, gritty, “realism” without much hope or redemption. Johns also plays with tropes he’s employed before, such as the phantom memory inhabitants of multiple realities feel when they encounter alternate versions of those close to them (seen before in JSA Classified #3 in 2005, when Power Girl from Earth 2 met Huntress from mainstream reality). These tropes work well, though except for the resolution of Wally’s quest to come back to reality, none of them do much more than promise things to come.

This promise leads to the main question this issue leaves in my mind: with Geoff Johns leaving comics for the foreseeable future to work on non-comic projects within DC Entertainment, how will these themes be carried on? Specifically, how will the questions of three Jokers and Dr. Manhattan play any role in the future stories? The executives at DC have promised that this storyline will play out over the next few years, but who will take those reigns? Will it be worth it? I wonder if the stories will be good enough in the meantime that fans, old and new, will mostly be content to wait, or if the cliffhanger will backfire when no answers materialize in the immediate future.

Artistically, the book is solid – all artists provide remarkably consistent work – Gary Frank, Ethan Van Sciver, Ivan Reis, and Phil Jimenez, all prominent artists in the DC Universe, and most prominent collaborators with Johns in the past. Nothing really stands out as extraordinarily appealing in character rendering or scene-work, though the formatting which mirrors Watchmen is well executed (if a bit heavy handed).

Since this is The Batman Universe, the elements I noticed that may affect the upcoming titles are, of course, the three Jokers (though I think that’s likely to wait along with Dr. Manhattan), the mysterious characters featured in Tom King’s upcoming Batman run, Dick Grayson taking up the Nightwing mantle again (after the events of Grayson #20), and Black Canary’s upcoming relationship with Green Arrow (which will provide more interesting timeline issues with Dinah jumping between Green Arrow and Batgirl and the Birds of Prey titles).

Ivan Reis provides a fun panorama of the Rebirth cast, with Batman, Superman, and Wonder Woman leading the charge. Batgirl, Huntress, Black Canary, Batwoman, Robin, Red Robin, Nightwing, Harley Quinn, Cassandra Cain, and Stephanie Brown all join the lineup in their New 52 costumes (except for Nightwing, who has regained his black-and-blues).

Is this a good story? Yes – Wally’s journey is well told, if familiar, and the resolution is satisfying. Is it a good relaunch? Only time will tell – the creative talent is mixed, but on the whole very exciting. Unlike the New 52, however, this one will have at least part of the fan community going in wanting things to change – so we’ll have to hope DC means it when it says that brighter days are coming.

Pick up/Pass? It’s a fine Flash story, a solid big picture look across the universe. It’s not that directly related to The Batman Universe of characters, outside of Batman himself (who doesn’t really do much besides provide exposition). We give a “pick up if you feel like it” recommendation, especially considering that it’s still $2.99 (plus tax) for over 60 pages of narrative content plus previews.

In Conclusion: The DC Universe is reborn as Wally West breaks back into reality, revealing dark secrets and adventures to come.