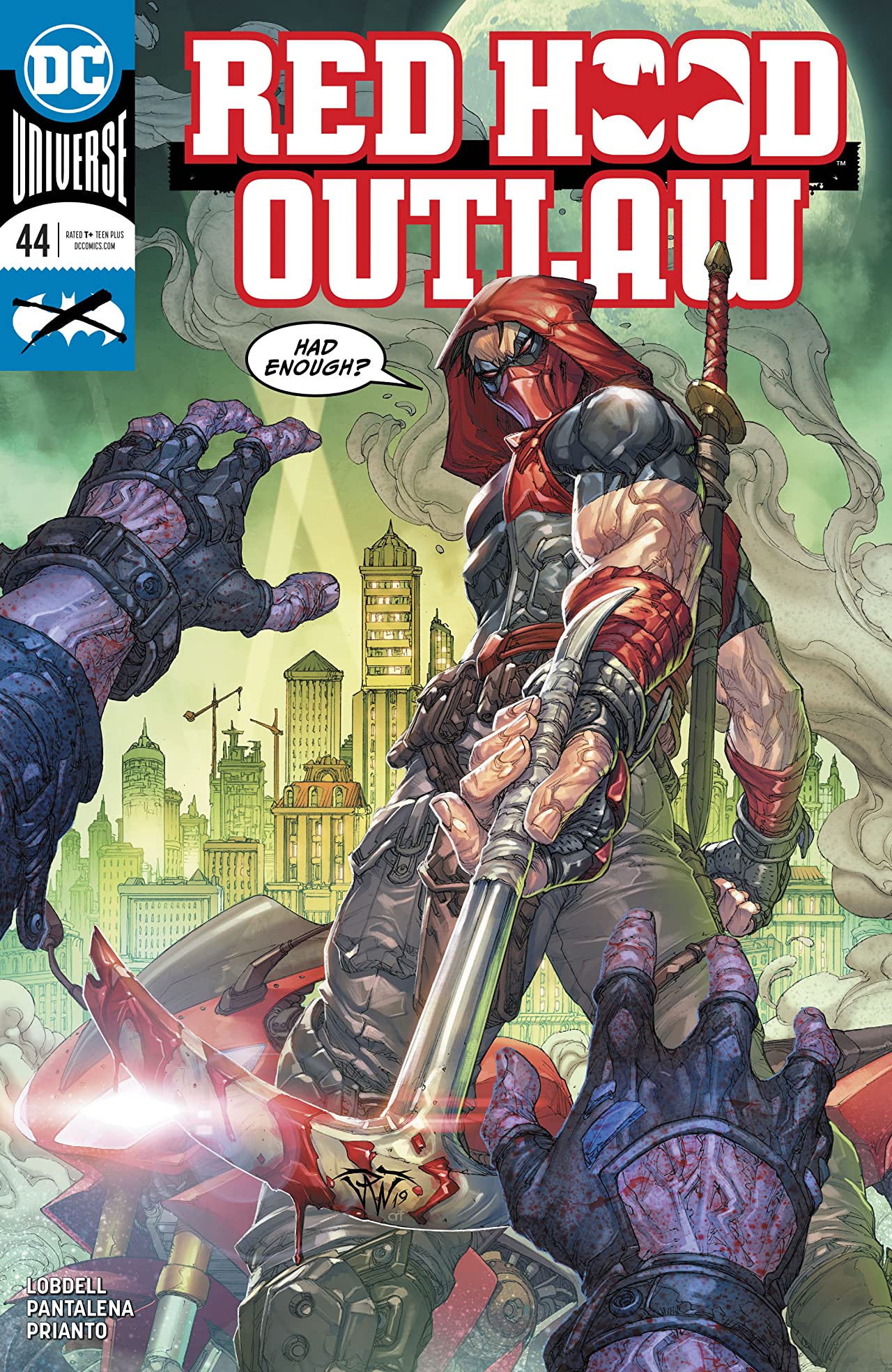 Overview: Our heroes infiltrate a Middle Eastern nation in search of demonic entities out to consume the world.

Synopsis (spoilers ahead): Our story begins with a proper introduction to one Isabel Ardila, who has been an on-again/off-again girlfriend of Jason Todd’s since before Rebirth. She’s a flight attendant who is getting over a late flight, only to get attacked by a psychotic assailant. Things look pretty gruesome as it is, only for Essence, another of Jason’s ex’s from before Rebirth, to manifest from Isabel’s body and instantly slay the psycho. It’s revealed that said psycho was some demonic entity.

The last issue showed Essence using the power of the Blood Blade to possess Isabel, and we learned that the sword is allowing the two to share the body, rather than just Essence taking over altogether.

We then move to the current story arc involving Jason, Bizarro, and Artemis trying to infiltrate a Middle-Eastern nation that they believe contains a group of evil demonic entities called the “Untitled.” These are the same beings that Essence is after. Jason and Bizarro are running a food truck as a disguise, while Artemis goes undercover to infiltrate the president’s guards. Jason and Bizarro are listening to their military contact on this matter, a Golden Age hero by the name of General Glory.

We get some information on the Untitled and Jason’s history with a flashback of his time in the All-Caste, learning how to detect and identify the Untitled. These demonic entities seem to possess individuals, feeding on strong emotions like hate and fear, and contorting their bodies into demonic shapes.

This bonding is then interjected by a B-plot involving Ma Gun and Brain reminiscing over the two of them apparently being ex-lovers, and Mallah, Brain’s student, pseudo-son, and lover (it’s weird, I don’t like it myself, but its comics) is jealous of the old-people remembering the good old days when they were in their prime.

Back to the plot, Artemis is reflecting on some times in her life that she was less than proud of as she tails the president. Suddenly Essence appears and attacks, putting the two/three women in Jason’s love life at sword-point. Essence reveals that the president is somehow pulling the strings behind the Untitled, and Artemis reveals that they also know that, hence why she is infiltrating the president’s private guard.

The two manage to reach an agreement to try and work together on this matter as we cut back to Jason, who is admiring the political activism of this country’s youth. He sees their hope and passion. Joining him at this moment is General Glory, who doesn’t appreciate Jason cutting off his connection. Jason is confused by how the Untitled can take a foothold in a country with so much activism and social justice before he realizes that the Untitled aren’t using the fear and hate of the country, but its HOPE. They are pushing more and more hopeful rhetoric and social activism in the face of a totalitarian government to feed their species and populate the country, slowly consuming it.

Jason posits that the only way the Untitled would plan such a bold strategy is with the obelisk they had stolen in the last issue, and so the team resolves to get it. The Untitled reveal themselves and attack the crowd. The gang bands together to defend themselves against forces no one but Jason has any training on how to properly deal with.

Analysis: This is a really good comic. Well structured, well written. The art has definitely improved since the terrible material we had last month. Unfortunately, there isn’t a lot I can point to that I specifically enjoyed because this isn’t really a comic about “moments.” We don’t have strong themes or character moments outside of maybe Jason and Bizarro reflecting on how much time has passed and how Jason still blames himself for them disappearing into that wormhole. This is definitely a “filler” issue in the story arc. Its purpose is less to give big exciting moments than to provide setup and foundation for future issues to come. The last issue, we set up the conflict, and now this issue we contextualize the conflict in a way the reader can properly get behind.

I think if I have to cover something specific about this issue that stands out, it’s that I was not expecting how on board I was going to be for Essence’s subplot or this arc in general. I am not a fan of the All-Caste backstory we got in the New 52. I felt it ruined a huge part of Jason’s backstory, which was his mother-son relationship with Talia al Ghul, and I’m still angry DC has all but removed that part of Jason’s history from him in this continuity.

I will always find myself liking characters and ideas that I want to eventually write about myself. Not with Jason specifically but with Essence and Isabel. I am in love with the concept of these two together as a duo. It reminds me of classic Firestorm comics or other buddy-cop stories where two characters from different walks of life are forced to work together to cooperate. You have magic demons, a katana-wielding bad-ass, and a normal person that all these concepts can be explained through as our audience surrogate. The premise of just Isabel and Essence on a super-heroic road trip together, righting wrongs and saving lives – I am in love with this idea.

There’s also the long and overdue return of Rebirth’s classic Outlaw roster, bringing back Artemis and Bizarro, who had been absent for so long. My only concern with this story is that it seems to be completely ignoring the Generation Outlaw team we just spent a story-arc getting to know. I wish at least one of them had been brought on board to help out on this mission. Perhaps Vessel could be used to help isolate the Untitled? One extra voice on the team wouldn’t have caused that much trouble, and they wouldn’t even have to do anything different with the story, just exist on the team to remind us that Generation Outlaw is still a part of the team.

Instead of focusing on this weird subplot involving Ma Gunn and a Brain in a Jar reminiscing about having sex, we could learn why exactly they want to be teachers at this school. Hopefully, next issue will explain why and will include the kids actually hanging around in this story

Final Thoughts: A great return to form from Lobdell’s quality writing and much better art since last time. What more can I ask for?