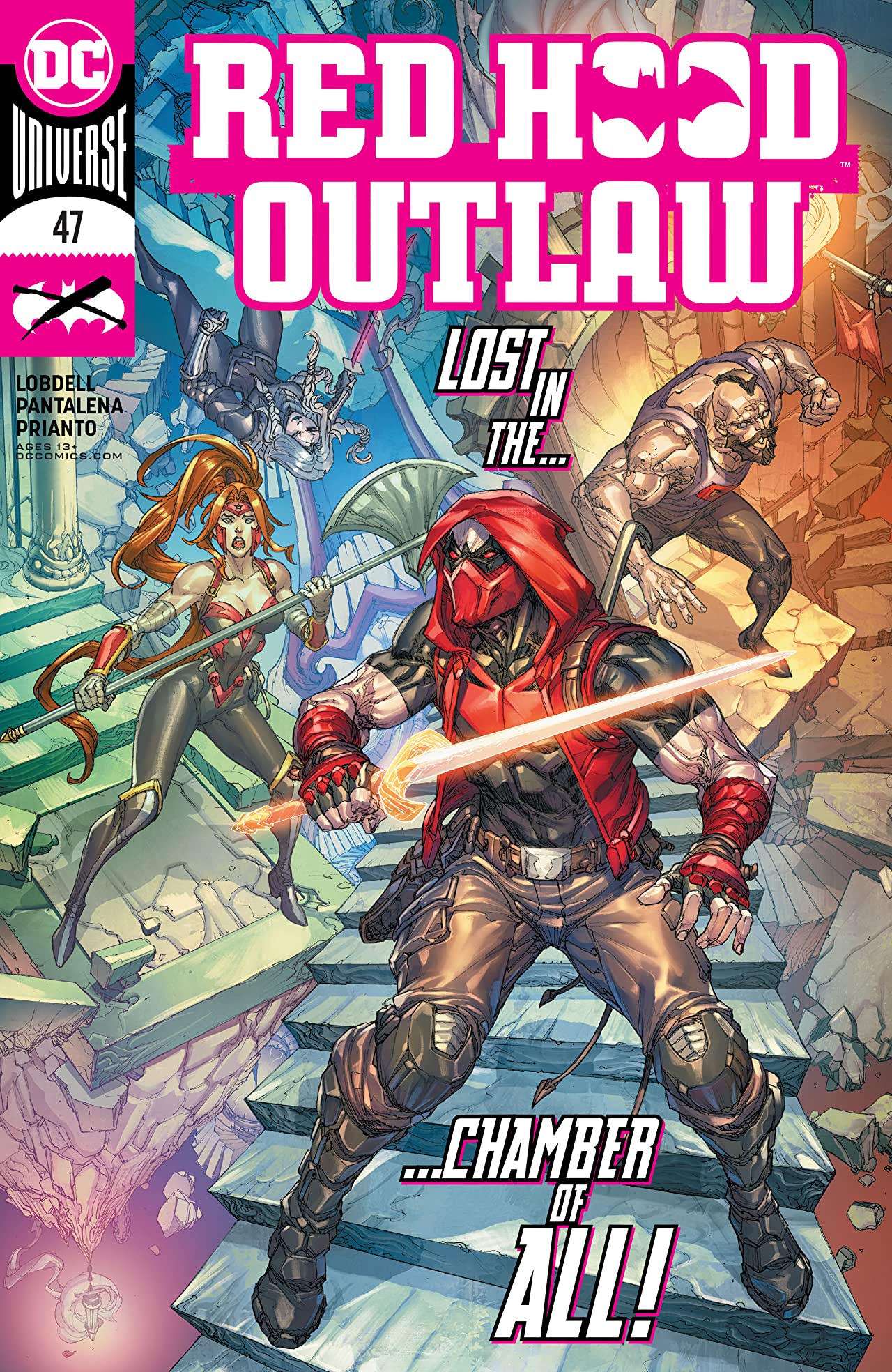 Overview: The Outlaws get help from a very surprising group of heroes in their struggle to seal the Chamber of All.

Synopsis (spoilers ahead): The issue opens up with (what appears to be) a moment from the past as three friends meander through the Chamber of All. Before they officially called themselves ‘Red Hood and the Outlaws’, Red Hood, Arsenal, and Starfire had wandered through the Chamber of All, exploring it and simply following a path to see where it will lead. The scene then transitions to the present, where the current Outlaws (Artemis and Red Hood), retired superhero (General Glory), and All Caste members (Essence and S’Aru) are traveling through the magical labyrinth on a mission to close it forever and prevent Trigon from escaping.

After walking for a bit, they arrive at a clearing where Quarci hostages being held captive by the Untitled and encircled by the eight obelisks; the captured civilians are a distraction orchestrated by the Untitled to stop the heroes from closing the Chamber of All.

The group tries to game-plan, but the conversation quickly devolves, going from brainstorming a plan to save the civilians to Jason and Essence playing the blame game and tossing snarky remarks at each other. Their exchange is brought to a halt by Artemis who, in true Amazonian fashion, decides to take matters into her own capable hands. With the help of Mistress, she simultaneously frees the hostages and destroys most of the obelisks, effectively forcing one of Trigon’s doorways closed.

Meanwhile, in hell (well, one of them) Trigon grips Bizarro in his massive hand and monologues about how truly unhappy he is with the Outlaws’ interference (his monologue is complete with the classic “you dare challenge me?” and “I will take over the earth once and for all!”). After listening for a moment, Bizarro cuts off the demon’s tirade by making great use of his freeze breath and one solid punch. Seconds later, he frees himself from Trigon’s hold (quite literally too because Trigon’s hand actually shatters into pieces).

Back above in the Chamber of All, Artemis stands victoriously atop the broken fragments of one of the obelisks while Jason and the others stare at her in amazement. They quickly get moving, General Glory and Essence leading the civilians to safety while S’Aru leads Jason and Artemis to the doorway they need to seal in order to close the magical chamber forever.

Above ground in the city of Qurac, the General and Essence help the last of the hostages make it to safety just as the earth starts to shake and rumble. They realize that Jason’s plan might be working a bit too well; the Chamber of All is collapsing, but with the Outlaws still in it.

Once more below in the Chamber of All, Jason and Artemis strain to slide the doors shut, sending S’Aru to safety ahead of themselves. The doors are heavy, so much so that even Artemis is struggling to push one of them closed. Thankfully, General Glory and Essence are able to join them, adding their weight and strength behind those of Jason and Artemis. As the doors slowly start to close, Jason peers through the partial opening and sees Bizarro once more gripped in Trigon’s hand (the one that is still attached to his arm). Jason is momentarily distracted, concerned for his friend before Artemis refocuses him on their mission. His concentration on closing the doors doesn’t last long, however, because Jason is then attacked from behind by a group of Untitled, forcing him to draw his All Blade and try to keep the monsters distracted long enough for the others to seal the doorway. The situation looks dire, and Jason prepares to take his last stand before two of the Untitled fall to the ground, red arrows sliding cleaning through their heads. Jason looks over and gapes in surprise: in front of him stands Arsenal, Starfire, and…himself. (Or, a version of himself).

“Jason, is that you?” Artemis asks, staring at the other Red Hood. General Glory and Essence are no less confused, the former voicing his dislike for magic and its mysteries, the latter ecstatic because of them.

Also looking in confusion at the new group of heroes are two of the Untitled. One leans over to the other. “Are you following any of this?”

On the other side of the doorway, Trigon sneers at the Kryptonian clone in his hand and promises Bizarro that he will use his dead body as a way to bludgeon millions to death. Bizarro isn’t having any of that and ends the conversation, and subsequently Trigon, by blasting through Trigon’s chest, creating a Bizarro-shaped hole where the demon’s heart should have been. Instead, the organ is gripped in Bizarro’s left hand.

With that, Trigon falls to the ground and doesn’t move.

Analysis: While the previous issue wasn’t the most engaging for me, I thoroughly enjoyed reading this one. Lobdell did a wonderful job with the writing, making the story flow smoothly and giving us some great moments between the different characters. (And of course kudos to Paolo Pantalena for the art!)

Kicking this story off, the issue opens up with a walk down memory lane as Lobdell brings in the O.G. Outlaws from the New 52. Although we only see them for a few pages, their dialogue and dynamic as friends are well written. It was neat going back and seeing these three as a team again.

Throughout the whole issue, I thought Lobdell did a delightful job writing all the interactions between the characters; the sarcastic and caustic remarks, especially between Jason and Essence, were nicely paced and executed, and showcased the different relationships between everyone in the group. The few moments throughout the comic that hinted towards there being something more between Jason and Artemis were also interesting to see; while it was minimal, the attraction was obvious, and I am intrigued to see what Lobdell does with it by the end of the series.

One of my favorite scenes in the entire issue has got to be the moment between the two Untitled; it’s no more than two sentences long but was perfectly placed and, as a reader also trying to follow what was going on, relatable.

On the other hand, while it was amusing to read the brawl between Bizarro and Trigon, I thought it concluded a bit too easily. The challenges throughout the issue overall came across to me similarly. The difficulty of destroying the obelisks, saving the hostages, and preventing Trigon from escaping the chamber wasn’t as big of a trial as I had thought it would be, which made the resolution feel weak.

That aside, the story was entertaining, and I had an enjoyable time reading it! I’m now really curious to see how the next issue will develop, especially with both teams of Outlaws being present.

Final thoughts: This issue was a fun read, and I’m excited to see how the two different teams of Outlaws react to each other!