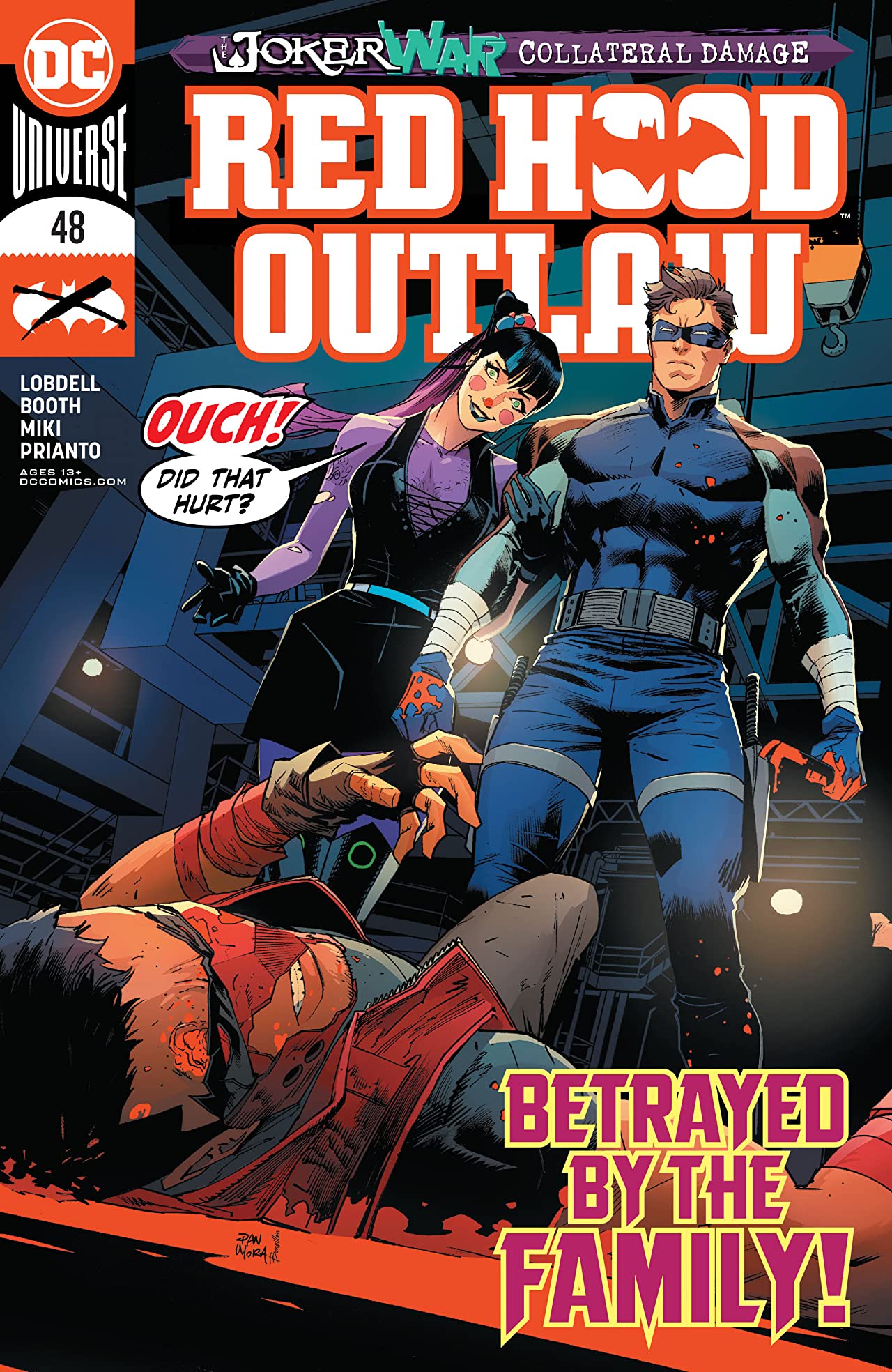 Synopsis (spoilers ahead): Red Hood: Outlaw #48 opens up by taking a pause from where the Outlaws are currently (in the Chamber of All) to narrate a one-shot that ties into Joker War. It begins with Jason riding through the streets of Gotham as Red Hood, weaving his motorcycle around the Joker’s henchmen, their clown mask obscuring their features as they attack Gotham citizens.

As Jason rides by, he’s noticed by one particular goon who relates Jason’s position to the Joker, stating that they’ll move in when he’s stopped. The Joker, casually sitting on an unconscious dude enjoying a slice of pizza, mocks the man and instead turns to a silhouetted figure, saying that he has the best woman on the job.

Returning to Jason, the second Robin arrives at the original home of Ma Gunn’s School for Wayward Boys, breaking down an old barrier he had installed into the home a long time back. This place had acted not only as a hideout for him and the other two Outlaws but, years ago, also as a home to a homeless teenager.

As Jason moves through the home he remembers a time when, as a foster kid living at Ma Gunn’s school, he met Bruce Wayne, not knowing the man’s secret identity at the time. Bruce had sponsored Jason’s stay at the home and had come to simply have a meal and be sure that Jason was happy. As Jason narrates the scene, he explains that although people who don’t know Batman thinks he’s unkind and he wears many masks, underneath them all Bruce cares.

As Jason reminisces, over a dozen of the Joker’s henchmen enter the property with the intention of capturing the Red Hood. Jason, already completely aware of his many stalkers, activates a self-destruct sequence to go off in five minutes and bring the house down in one big boom.

After that, Jason proceeds to head towards the exit of the old home, fighting each henchman as they attack. He doesn’t stop his forward movement until a particular sound catches his ear; the noise of a crowbar hitting human flesh. Immediately Jason switches directions, following the noise to the roof where he sees Duela Dent (self-proclaimed daughter of the Joker) collapsed on the floor, some chick (aka Punchline, although Jason doesn’t know her name) with a crowbar standing over her.

Jason doesn’t waste time letting Punchline introduce herself and launces forward to kick her butt. He’s interrupted by someone swinging through the window and then right into his stomach. Jason immediately recognizes Dick Grayson by his voice, but can clearly tell he’s being controlled by the Joker to act as both minion and communicator; the Joker relaying his words to Jason through Dick. It takes less than a moment for Jason to move right back into action, exchanging kick for punch and trying to get the upper hand over Dick. As they fight, Jason notices that Dick is abnormally sluggish and definitely off his game and demands to know why the Joker is attacking Duela. The Joker replies that he needed to lure Jason out, but Jason doesn’t catch the rest of the sentence because he sinks his fist into Dick’s face.

Glancing over at Duela, Jason shouts that he promises he’ll get her to safety but is cut off midsentence by a crowbar being smashed into his head by Punchline. He blacks out, and after regaining consciousness, awakes to see the building burning, flames eating away at the rotten wood.

Rushing in, Jason screams Duela’s name but falls silent as he finds her body and cradles it. As he does so he listens to other members of the Bat-Family radio for help mitigating attacks issued by the Joker. Carefully, Jason sets Duela’s body back down and leaves to respond to their calls.

In an ambulance that has been commandeered by Punchline, Dick warns Punchline that the Red Hood can be quite obsessive and that he won’t rest until he finds a body in the wreckage. Punchline breezily comments that it’s already been taken care of and she has no doubt Jason will believe that the homeless girl’s body they left is Duela. She gestures the back of the ambulance where the real Duela is lying and holds up the skin that had previously been attached to her face. It’s now been peeled off and Punchline looks at the unconscious teen through the gaping trademark smile of the Joker and laughs.

Analysis: I have to admit that before reading this issue I had little to no desire to read Joker War (my interest level in the Joker–as well as a mind-controlled Dick Grayson–is an absolute zero). After reading this issue, however, I have to say my intrigue in this whole arc is definitely piqued and I’m curious to know how it will all conclude.

In this particular issue, Lobdell takes us away from the Outlaws as a group and really focuses on just Jason, using this one-shot as a way to tie him to the events of Joker War. Overall, I thought the writing flowed nicely and the movement of the story was clear and kept me engaged.

Within this one-shot there were also some neat nods to previous comics as well; like the manner in which Jason holds Duela’s body, which is of course inspired by Death in the Family, and scene where Jason and Bruce share a meal at Ma Gunn’s home. That scene is definitely one of my favorites and I really liked the interaction between Jason and Bruce. It was really sweet and although simple and uncomplicated, it showcased a joyful, fun moment. I thought Jason’s reflection about how underneath all the masks Bruce does cares was also well composed, as that basically encapsulates who Batman is and gives an insight into Jason’s understanding of him.

I also thought that while Jason did adhere to using rubber bullets and refrained from killing point-blank while he’s in Gotham (to respect Bruce’s rules), his decisions still came across as completely in character. It reiterates the fact that Jason still disagrees with the way Bruce does things and wouldn’t hesitate to respond to violence lethally. For example, in the scene where he was setting the timer for the bomb, Jason notes that killing a bunch of henchmen via an explosion technically doesn’t break Bruce’s code, and as such, not a problem.

Additionally, I thought the way in which Punchline (most likely at the instruction of the Joker) orchestrated faking Duela’s death and then dupes Jason was, albeit predictable, a smart move. No doubt it could be a great way to get under Jason’s skin (and, apparently, a great way to take Duela’s off). As this was my first introduction to Punchline as a character she didn’t necessarily interest me but even so that didn’t detract too much from the story; I thought it was a good one-shot issue that neatly tied into the Joker War.

Final Thoughts: I’m surprised to say I do want to find out how this will all get resolved and what the ramifications will be. I’m looking forward to seeing not only Jason respond to this fiasco but the other members of the Bat-Family as well!