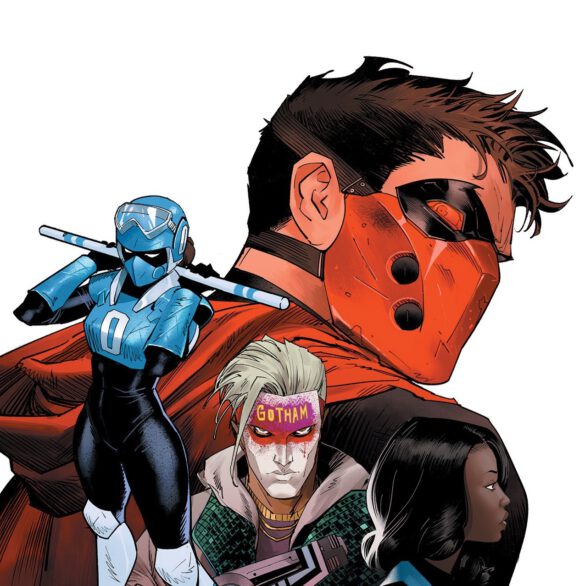 Overview:  Red Hood teams up with Strike and her team to keep the Hill safe.

Synopsis (spoilers ahead): Sitting beside the bedside of an unconscious man, Thomas Misell quietly promises the sleeping Korlee Jr. that underestimating him was a mistake. Now, all of Gotham will witness how to really run things. Silhouetted in the hospital room doorway, Killer Croc watches as a silent observer.

The television fixed upon the opposite wall is on, reporter Denise Harlowe recounting the latest news. More information coming up on the bombing of a popular sneaker store in the Hill, which is just another sloppy act of violence committed by yet another sloppy Joker wannabe.

Glaring at the woman on the screen, Misell dials a number and raises the cellphone to his ear. Upon receiving an answer from Gotham One, he requests to be put through to the reporter, Miss Harlowe, saying that he has some information on the Godmode store bombing.

The next morning, Jason Todd stops by Dana Harlowe’s apartment, inviting her to join him for breakfast. Saying she’ll be out in five, Dana closes the door and stares at the discarded costume lying at her feet. It’s the same costume that belongs to the vigilante Strike.

At Annie B’s diner, Jason and Dana’s conversation is interrupted by the arrival of Denise, Dana’s sister. Their relationship is a strained one; Denise disapproves of the neighborhood watch, which she knows her sister is a part of, and their lack of accountability. Dana bristles at her sister’s reproving comments and storms out of the diner, shaking off Jason’s attempts at placating her.

Standing in what appears to be an abandoned warehouse, Thomas Misell casually disregards one of his henchman’s frantic cries that Black Mask is on his way back to Gotham. Word about their first attempted heist at seizing his cargo (see Red Hood #51) has gotten out and Black Mask isn’t happy.

Held at gunpoint in a semi-circle around Misell by other lackeys, Black Mask’s henchmen sneer that he’s is done for. Scoffing, Misell gives the order to bloodily kill each of Black Mask’s men and dress the room up for the next meeting he’s planning.

That night, Red Hood taps the passenger window of a car idling in an empty street. He motions for Killer Croc to step out, and asks what job the villain is doing these days. Although he was expecting to see Strike and her crew, Croc explains that he’s acting as a decoy. Red Hood immediately dashes down the street, realizing that Croc was just a distraction for Misell’s other goons to capture Denise.

Despite their attempts to get to the reporter and rescue her, the car that Denise was shoved into carries her and Thomas Misell away, leaving behind Red Hood, Strike, and her crew. Although they fail to rescue Denise, they do manage to capture one of Misell’s henchmen, who confesses to knowing where Denise is being held captive.

As they prepare to find Denise and rescue her, Jason asks Dana about the fighting techniques she and her crew used; they all seem familiar to him. Dana replies that someone who spent lifetimes in the shadows trained them to fight without guns, but doesn’t reveal exactly who.

The two of them and the rest of the neighborhood watch arrive at the warehouse holding Denise hostage, and before she’s seriously injured, they descend into the room in a shower of skylight glass. The fight is brief; Thomas Misell and his men are subdued abruptly and Denise safely rescued.

“So, we just let dude go?” A shadowed figure asks.

Korlee Jr. assents. “A deals a deal, Tiwa. Croc helps with the setup, we get the tech, and Tommy gets his spotlight. Back to work.”

Standing in an unfurnished apartment, Jason Todd notices a wrapped gift box sitting on a closed can of paint. Closing his phone as Bruce Wayne’s voicemail plays, Jason grins at the gift. Dana, who’s helping him paint the apartment, asks if Jason’s okay, to which he says yes, he’s just found a housewarming gift from Bruce.

Staring out of the apartment window, holding the box, Jason gazes out into the Gotham sky. Perched atop a roof on the building across, Batman looks back, faintly grinning.

Analysis: Red Hood #52 continues Martinbrough’s story about the Hill and its occupants, fashion crime lords, and street gangs. Thomas Misell’s attempts at seizing control and demonstrating to any and everyone how to really get things done in Gotham. This, however, is later revealed to have been a ploy by Korlee Jr. all along, who simply capitalized on Thomas’ hubris to further his own machinations, which have yet to be fully revealed.

This revelation wasn’t necessarily a total surprise, yet it nicely shifts the upper-hand between the different characters and continues to keep the plot interesting.

Crime, however, isn’t the only element the issue focuses on as the topic of family plays a prevalent role.

This issue in particular takes its time to highlight how the events from the Joker War impacted regular civilians and the lives of their family members. For the Harlowe sisters, two very different lifestyles were born from it, and their differing viewpoints and beliefs creates a very believable conflict between them. Once again the question is posed: should vigilantes be allowed to operate outside the law?

Despite her steadfastness and fortitude, Jason warns Dana that playing the hero the way she is by going after her sister isn’t a one-time thing. It’s constantly fighting for the betterment of others, and in vigilanteism, people can get hurt. At the end of the day, however, protecting your family supersedes any concern, and Dana throws that in Jason’s face. “Would anything or anyone stop you from keeping your family safe?”

No answer is given on Jason’s part and the noticeable lack of thought bubbles throughout the narrative was made starker to me. It offsets the focus on Jason Todd as the story’s main character and instead treats him like any other with contrasting opinions, reasoning, and incentives.

The theme of family continues to the end of the issue where Jason receives a house-warming gift from Bruce, which puts their strained adopted-son-father relationship in a much better light. Personally, I really enjoyed that added touch and I do hope the sentiment continues.

Although the pacing of the story did feel off at times and in certain panels, the coloring and art weren’t the greatest, I had a good time reading this issue. I hope that as it progresses the focus shifts back to center a bit more around Red Hood and the other heroes in Gotham, and continues to delve into the more overlooked crimes taking place in the streets of Gotham.

Though a little rough around the edges, Red Hood #52 neatly pulls crime and family into its focus as Jason’s adventure in the Hill continues.