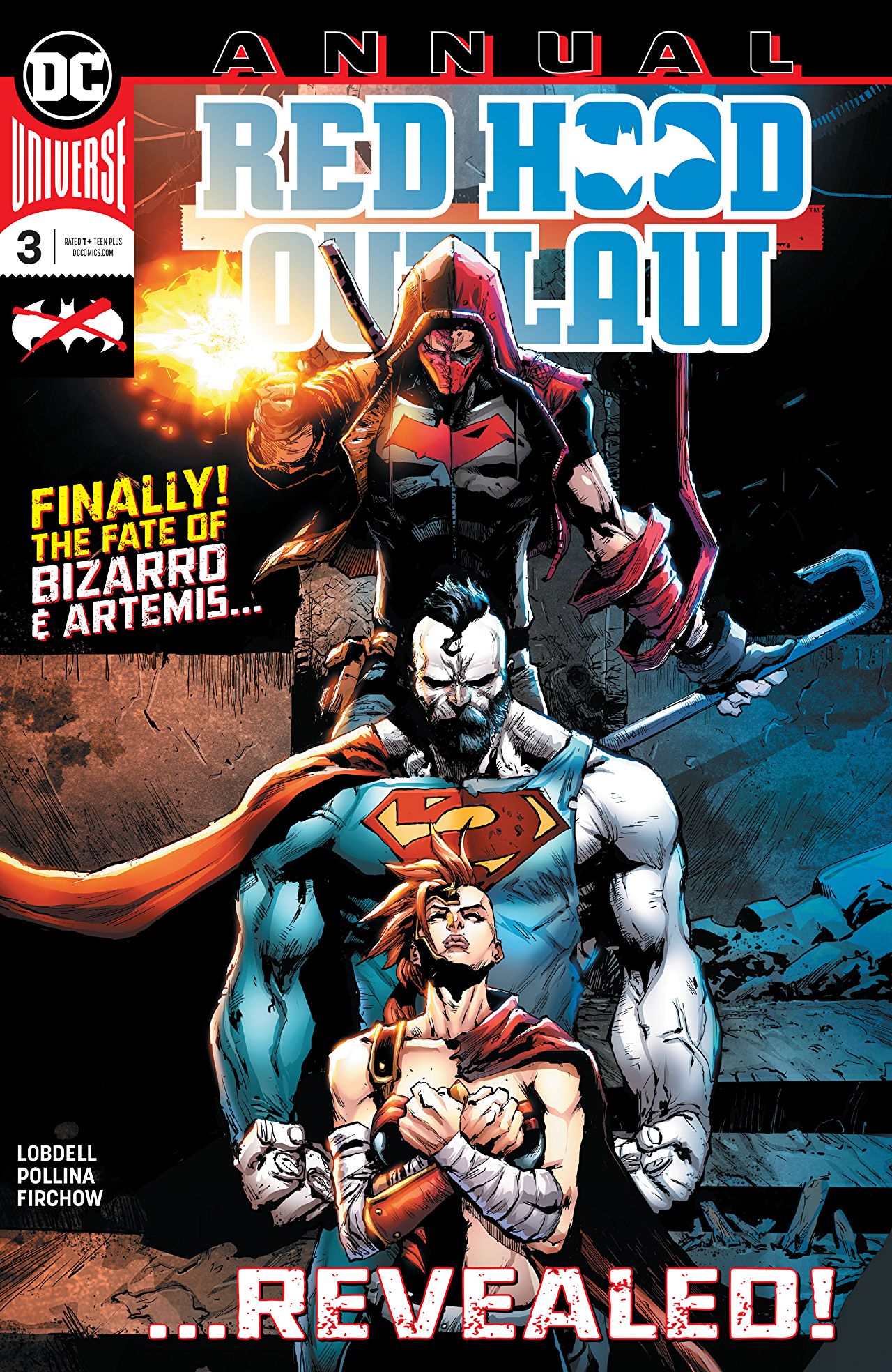 Overview: A story that would probably take twelve issues to fully tell, is instead compressed to a single annual and heavily compressed in the process. resulting in a non-story.

Synopsis (spoilers ahead): Jason apparently gets involved in some school for mutants, completely unexplained and not related to anything happening in the comic run, unless this was what Lex Luthor gave him after the “Offer” earlier this month.

We do learn that Artemis and Bizarro are alive, something the dedicated readers have already known, and new readers wouldn’t know they were missing. And while I love diegetic answers, maybe don’t waste four pages explaining something we didn’t need to be explained. Especially since as we’ll learn later, so much of this story is being compressed for time.

Directly contradicting the attention to diegetic exposition, we now get an omnipresent narrator that has no relation to the audience. They explain who Artemis and Bizarro are. Information that could have been explained a few pages earlier, followed by them wandering the streets of an alternate reality.

Stumbling upon the Hall of Justice (now dubbed the Hall of Punishment) they find eerie golden spikes puncturing the entire building and a strange man in a security guard uniform. He reveals that this world is very similar to an old Elseworld story from a decade back called “Act of God” where all the superheroes in the world suddenly lost their powers, only in this world, all the normal people suddenly got powers. One must assume that in this world, everyone’s superpowers run under the same power system or something because the Elseworld storyline had a lot of problems.

But anyway, all the normal people waged a war against the superheroes and killed them all, (including Superman) plunging the world into chaos. The security guard attacks Artemis and Bizarro, and we learn what happens when Artemis tries to summon her ax to her side when she’s in another dimension. Catastrophic and intense pain followed by collapsing in Bizarro’s arms.

Bizarro then easily takes out the security guard, uppercutting him into the sun in one hit. We then see a few other normals wandering around looking to kill them. Before we can even figure out who this eclectic group of people are, we cut to six months later, where one of the normals we saw before is now being pursued, by what looks like an alternate version of the Joker named “Jack Knife”, only to reveal it was just a weird page layout and it’s actually just a random guy in a mech suit. Why does being in a mech suit count the same as having superpowers? Did the guy have technopathy or something? We don’t know.

Bizarro then appears out of nowhere, as this was but a trap they had laid out to attack the mech guy, but the more surprising thing is Bizarro is now sporting a might lumberjack beard. The good normals then give Bizarro a jewel that he apparently asked her to get him, and flies off, since the story has places it needs to be.

We next find Jack Knife and Artemis (who’s now sporting a fancy new costume and a side-shave) who are in some sort of prison in a weird facility held in a government building. The two hatched a plan to escape and succeed in the same few panels it is shown.

Bizarro and the person he was with earlier show up at a meeting place and wait for Artemis and Jack Knife to begin the next stage of the plan. Which involves the two making their way up to where the big bad guy (an alternate version of Lex Luthor who’s just a giant brain with hologram projection) is, letting him monologue and explain his entire plan, which involves opening a doorway back to the main universe using the fractured doorway they had come through, to begin with.

Artemis then dives in to attack Lex and gets pointlessly hit by his taser blast, which stuns her and Jack. She then calls in Bizarro and their rebel alliance to fight (something she could have done before being electrocuted), there’s a big fight, they disable a genetic bomb planned to depower everyone in our world, and then walk through the doorway to go be with Red Hood again.

Analysis: Despite how much you see written up above, we didn’t really get that much out of this. At most, this was two comic book’s worth of pages telling what should have taken over twelve issues worth of time.

If your story requires the introduction of a whole new world and cast of characters, do not make the story such a plot-heavy story that needs to be finished in as short a time as possible. If the premise of the issue is “here is what Artemis and Bizarro have been up to”, don’t make it some great epic, make it a straightforward A to B story with no extra pieces. Worldbuilding is only good when it feels like it matters. We get introduced to a dozen or so characters, and none of them matter, and to avoid focusing on the absolute no names that have no relevance, let’s use the two most notorious characters in the story as examples.

Jack Knife is obviously a Joker analog, from his suit to his face (even without makeup) to his wavy hair, not to mention his posture and his sense of humor. His name, “Jack Knife” is also a reference to Joker’s most famous pseudonym “Jack Napier”. I have to explain this because really, nothing about this character actually resembles Joker outside of a few moments where he’s a bit unhinged. But with a few tweaks to his appearance, this guy could easily be his own character. There is no reason to make him Joker outside of the reference.

This goes even worse for Lex Luthor. He is completely removed from his traditional counterpart. He looks, acts, and sounds nothing like his original self. He’s just a giant brain in a wheelchair with a hologram face. It’s a cool design, but there’s nothing really there that makes him Lex Luthor. We don’t even really know his motivations really behind why he caused this Elseworlds to exist. He just does with the supposed intent of world domination. But if you look at the world he’s created, there’s no attempt to rule this at all. There’s just wild chaos. His guards don’t even walk the street, they are isolated to his compound. By all accounts, he’s done nothing to actually conquer this world.

When creating alternate universe versions of a character, you do so with the intent of making a point on the original character. Earth 3’s Crime Syndicate is a perfect example. Showing what the world is like if the Justice League is evil, and what these evil counterparts would look like. These characters don’t just exist to name drop their good counterparts. They don’t just exist so we can go “oh, I recognize that character from another story.”

Now, drawing away from the references and just looking at the story. This premise makes even less sense than “Act of God” did, which this story is making a very clear reference to. The normal people suddenly have powers and are killing the supers who don’t have powers. This is such a confusing and random world. There’s no real motivation here. It’s basically making the assumption that normal people are horrible people who should never be given this kind of power. The existence of Artemis and Bizarro in this world, the destruction of the Hall of Justice and the very very public display of Superman’s corpse shows a very clear intent to its message. That the true superheroes were the ones who deserve these powers. Good and change only begins to come to this world after true superheroes from our world come to this land full of fake people. Jack Knife waxes musingly at the lost supers and how they were good people, all the while he and the other normals in the resistance act in bloodthirsty and vicious behaviors, acting like villains, even when they are the heroes in the story.

Such a story like this obviously doesn’t want to admit any politics. It would think that its simply telling a harmless comic book story about a quirky Elseworld story. When in reality, this story is bathed in politics about how there is a certain class of people who deserve to have power and when these people have their power taken away and given to the masses that they protect, they only destroy themselves and the world. Only the privileged few deserve power in this world. “Look at what happens when the right people don’t have the power they deserve.”

The art in this story is also very below standard quality. Bizarro’s face is never consistent, warping with every panel. Everything looks cartoony in the wrong way.

The story only had one good idea that touches on for a second and it’s “what would happen if Artemis tried to summon her ax”. The only thing this shows is Artemis getting intense pain, passing out, and leaving Bizarro to the fight alone. If you want to go back to my earlier comment about politics being nakedly obvious. Artemis in this story is almost exclusively knocked out by her own actions (first time by summoning her ax, the second time by rushing Luthor and getting zapped in response), or in captivity (even if it was a “planned” event, it is still all we see of her.). The only proactive thing Artemis does that is successful, is give Lex Luthor the finishing blow, but she only does this AFTER the heroes have already secured a victory; a victory the rest of them achieve in seconds, without any obstacle, even though Artemis was taken out in seconds trying to do the same thing.

This story is basically condemning Artemis for being the proactive badass that she is. There are only a few other female characters in the story. One is a random side character with no plot relevance at all, and the other is a girl who needs to be saved by Bizarro (even if its a trap, it is only revealed after the fact, so our initial perception of her is one that needs rescue.), then is reprimanded by Bizarro in the story for trying to finish off the mech guy. Her only actual character trait outside of powers and gender is that she’s in a relationship with an even more insignificant character.

So, among the three female characters in this epic annual story, one is insignificant, one is successful but a foot-soldier and the other is confident and independent, and gets incapacitated at every opportunity. This is straightforward some of the most sexist writing I’ve personally seen in comics lately.

Oh, and onto the plot itself? Yeah, nothing really happens. Sure there’s some kind of adventure that happens off-screen, but nothing that actually matters happens in this comic, except for the last ten pages, and in the end, they defeat the bad guy with so little effort that it comes across like there was no threat at all the entire time.

Final Thoughts: This story is incredibly pointless, it offers nothing original or constructive to the conversation, and is layered in sketchy politics that should have never gotten through editorial.