Review: Red Hood and the Outlaws #39 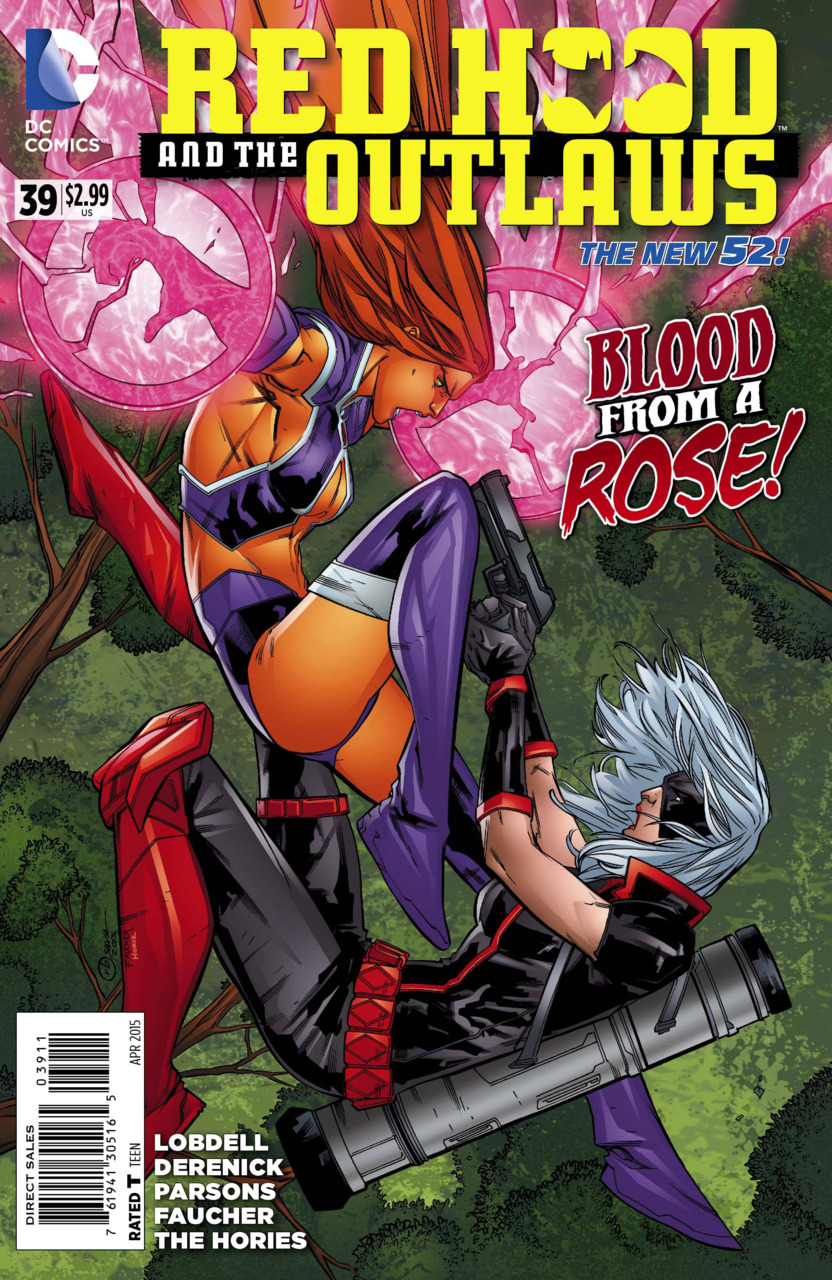 This week’s issue of Red Hood and The Outlaws opens with Jason Todd struggling with the idea of using a venom based hyper-steroid. The use of drugs for various reasons has been a recurring theme throughout this series. Scott Lobdell does a great job of portraying a variety of ways in which a person can spiral out of control in the face of drug use. It is the friendship of Roy Harper that helps Jason understand that the use of drugs will not have any positive results. Dr. Simon Amal, also known as Crux, quickly breaks up the serious tone of the dialogue and draws the reader’s attention to the current task at hand, finding Starfire.

The dialogue between Kori and her sister Komand’r feels very disoriented in the first couple of pages. The reader is given little explanation as to why Kom suddenly changes from wanting to kill her sister to wanting to save her. With them being the only two people in the jungle it seems strange that she would present herself in this manner only to change her tune for no apparent reason. Either way, it was nice to see Kori and Kom as sisters in a relationship that is rooted in love.

Meanwhile, we learn that Dr. Amal is in full control of his Crux form as he saves Roy from a missile fired into the side of their aircraft. This act solidifies Amal as a true ally to the Outlaws. The missile was fired by former love interest of Jason Todd, Rose Wilson. Rose indicates that she was hired to fulfill a mission in the jungle and that Jason and Roy were merely an unforeseen distraction.

The story shifts back to the topic of drugs as Kom helps Kori cleanse her system of the drugs coercing through her veins. We learn that Kori started using the drugs as a means to discover who is at the head of the intergalactic black market drug trade. However, in her pursuits she quickly became an addict. I found this to be an accurate portrayal of just how quickly drug use can negatively impact the life of a new user. With a newly acquired outlook on life, Kori is determined to locate and destroy the Citadel that she and Kom had seen patrolling the rainforest.

Rose has teamed up with the Outlaws in order to locate Kori as this was her primary reason for being in the jungle. However, upon their initial meeting, Starfire quickly proves that she is the superior warrior and will not be taken captive by anyone. The heartfelt reunion with Roy demonstrates that Starfire is returning to a pre-drug state. The issue wraps up with our new band of heroes discovering that a large number Citadel soldiers have set up a makeshift home base in the jungle and appear to be preparing for a massive attack.

This issue reunited a rejuvenated Starfire with the other two members of the Outlaws. Although it felt disjointed at times, the issue as a whole was well written and set the stage for a battle of epic proportions. Furthermore, the preview for the next issue, Another Death in the Family, is reason enough to be excited about this series moving forward. The current team of writer and artists have done a great job with this current run and make it a series that should be given a shot by all fans of the DC universe.