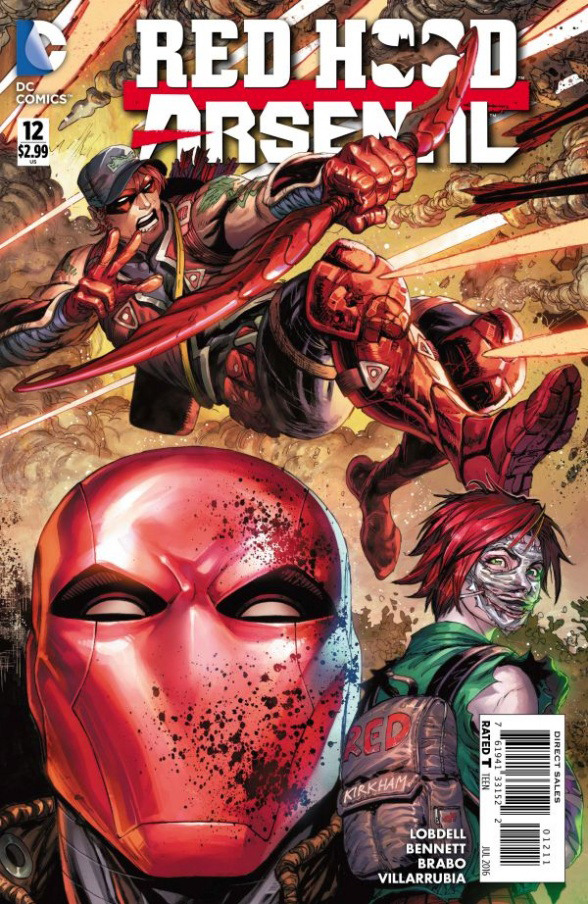 “Vote Now and Vote Often” opens with Roy tied to a chair being tortured. He has been captured by the Iron Rule. They are posting Roy on the Internet with a vote for him to die or live. We also see that Tara Battleworth has also been kidnapped and she is forced to watch the torture and the vote.

We shift to various scenes of citizens voting for the death of Arsenal. Out last scene of this montage is a picture of Barbara Gordon finding this site in shock.

We shift to an ambulance, Joker’s Daughter (JD) is strapped to a gurney. The medics are working to save her life after Jason shot her in the last issue. Outside Jason is hidden nearby on his bike, watching the scene as the ambulance with a police escort depart. We get a voice over of Jason recapping the events that led to JD being shot. Again we see Jason comparing himself to JD. She wears the face of the Joker while he took on the mantle of a prior Joker identity himself. Barbara shakes Jason out of his thoughts by reporting that Arsenal is in trouble. Barbara says she is trying to track the source of the signal but she is having to traverse multiple relays but as soon as she finds anything she will notify Jason. Red Hood takes off without responding back in his thoughts.

Now we get a brief recap of Red Hood and the Outlaws with Starfire and the Rent-A-Bat business venture we have been reading about. Jason will not let Roy die.

In the ambulance the medics are still working on JD. One of the medics says that he is sorry then we see that he has been stabbed in the chest. It is not shown but my guess is that he undid JD’s restraints and she killed him. She then turns her attention on the other medic. Outside the vehicle we see one of the police cruisers approaching a manhole that has the cover removed. We see a glowing hand emerge and punch the car destroying it and forcing the ambulance to violently veer off and flip over along with the other police car. The hand belonged to Everest, one of the Iron Rule. He calls JD boss and the two of them leave the carnage after a moment for JD to soak up her own applause.

Jason has arrived at Arsenal’s workshop. He is looking for Roy’s boomerang arrow which will hone in on Roy’s quiver. Again we get Jason’s thoughts as he is thinking about his death at the hands of the Joker. Jason suddenly is shaken out of his reverie to find a box marked as radioactive. Jason opens it and declares that Roy has saved his own life.

We find that JD is now with Roy. She wakes him up and says that the Iron Rule is no match for them and she will get him out. Roy is thankful until she reveals that she was behind everything. She punches Roy and holds a gun to Tara.

Red Hood makes contact and says that they have five seconds to give up or he is coming in and then the screen goes black. JD says that the room has suddenly gotten hot. Next issue the End of Red Hood and Arsenal.

Last issue I commented on the disparaging scenes we saw with Roy and the Iron Rule and Jason and JD. I said that these scenes really did not fit together. I was wrong. They do fit together and this fits together with the entire JD arc. I am still not a fan of reversing the change in the JD character to make her more like-able but at least everything was made to fit together.

With that said I kind of enjoyed this issue. It makes sense that Roy was taken down by the Iron Rule basically with the mercenaries being radioactive mutants and it was not really necessary to see it go down. The question I have is why bring Tara into this, other than to give a damsel in distress vibe to the story which is a tired plot trope. With the JD involvement, it makes a little more sense to bring Tara here because she did have direct dealing with JD and it is conceivable that she might want to kill her also.

The problem with the story is the convoluted nature of it. If JD wanted to kill Red Hood and Arsenal all along why send in the Iron Rule which she somehow employed to invade the Nethers and scare the citizens. How could she have known that she and Roy would be dragged down by the Dwellers which would then bring Jason in to rescue them and allow the people of the Nethers to ask for his help against these strangers. It makes sense that she might want to fake a change of heart. I guess the answer will be that she is just crazy but how did she get the money to pay these mercenaries?

My next issue is the obvious nod to Death in the Family. There is even a quip about a 1-800 number since the 1-900 numbers of the eighties have lost their appeal. The difference here is that the vote is online which has been used to similar effect in other stories including movies. It does lead to Jason discovering what is happening.

Overall, I like the action possibilities here but the Joker’s Daughter story has left me cold.