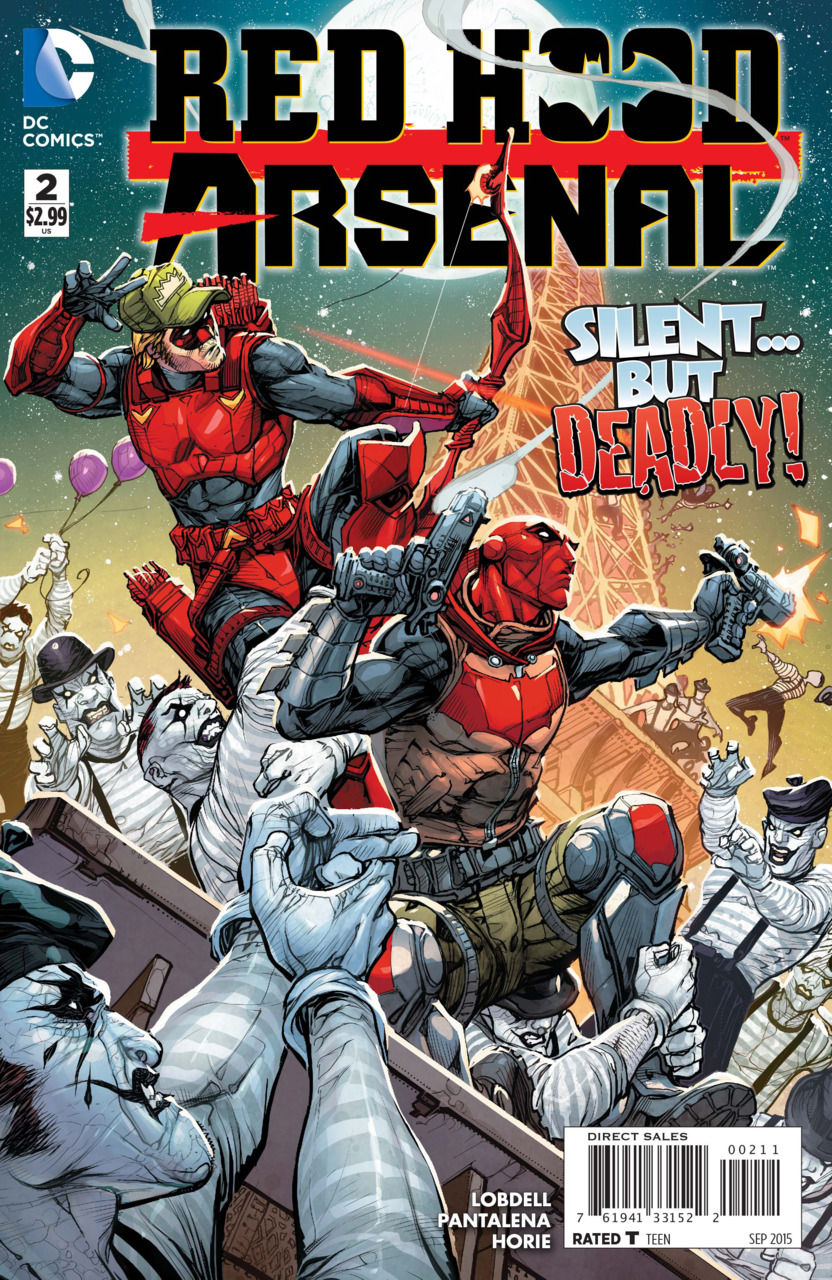 Red Hood and Arsenal have an adventure in Paris, the city of lights, where they defeat bad guys and act like ugly American superheroes on vacation.

Jason Todd is happily showering when his roommate and best friend, Roy Harper, tests out his newly invented flame thrower on him. Luckily there is no damage. It seems that Roy has spent all of their money on building weapons and has turned their apartment into a mad scientist laboratory. Oh, and they are getting evicted because they are now broke.

Because of their money troubles the pair visit Tara Battleworth who previously promised them jobs. One problem is that she has in the meantime looked into their history of hijinks and decided they are risky to work with. They are able to convince her to let them have another shot at the job.

She sends the pair to Paris where they are to find a diplomat who has stolen a thumb drive which they are to recover. They have until the end of the day so Jason has come up with some baddies they can fight to kill some down time. The comic then turns into a video game screen depicting Red Hood and Arsenal defeating terrorists, arms dealers and ninjas at various levels.

Their escapades have been seen by Ms. Battleworth who warns them that she wants her task completed. Danger looms for our heroes when a local agent-boss decides to punish the two for causing trouble in his city.

While eating dinner Jason and Roy see a S.H.A.D.E scientist having a physical altercation with his dinner date, a pretty blonde lady named Allison. They attack the scientist but his friends, a team of mime assassins, show up ready for a fight. Jason and Roy suit up into Red Hood and Arsenal mid fight and the comic turns again into a video game start screen.

It turns out that the mimes are a creation of the scientist’s mind and when Red Hood distracts him by shooting him in the shoulder the mimes disappear. (As they go they are met by a woman who says they are ‘part of something bigger now’. I’m not too familiar with these characters so if you can explain the significance of this panel in the comments I’d appreciate it.)

The story fast forwards to Jason and Roy back in Tara’s office. They have apparently, between panels, found the thumb drive and have returned it to her. She is disappointed that there seems to be just Pepe Le Pew cartoons on the drive but pays the two handsomely for their trouble.

Two days later the pair have answered an ad for their services. They go to a seedy party of town and meet a mysterious man. To be continued…

I have to admit that I am not too familiar with either one of these heroes. I know of them generally but have no history with them since my tastes generally run in the Gotham Academy and Harley Quinn vein. So, I was shocked at how much I enjoyed this comic.

The relationship between Jason and Roy is terrific. Roy is a gleefully mad scientist with a taste for explosions. Jason is outwardly more subdued, but has a crazy streak to match. I can see why these guys are friends, they seem to have a lot of fun together even as they bicker.

The other thing I was surprised about was how much I liked the art. The book was drawn by Paolo Pantalena in a kind of scratchy pen style. Normally I don’t like this kind of art but here for some reason it works. There is a panel showing Roy like a crazed Heat-Miser that was really hysterical.

The other thing that shouldn’t have worked, but somehow did, was the fact that you never actually see the guys recover the thumb drive which is presumably the whole point of the issue. All of that action happens between panels. Normally I would lambast a book for messing with the plot like that but I just can’t here. This is a relationship story, not an action comic so these things don’t matter. They even refer to the thumb drive as a McGuffin, so the writer Scott Lobdell isn’t trying to hide the fact that it doesn’t have much bearing to what his book is about.

Between the humor, the strong relationship development and the innovative art I am going to strongly recommend Red Hood and Arsenal #2 even if you don’t typically like this kind of book.

Maybe I’m just happily surprised at how much I enjoyed this comic, but I am going to rate it pretty highly. Oh, and if you could explain the disappearing mime panel in the comments below I’d appreciate it.