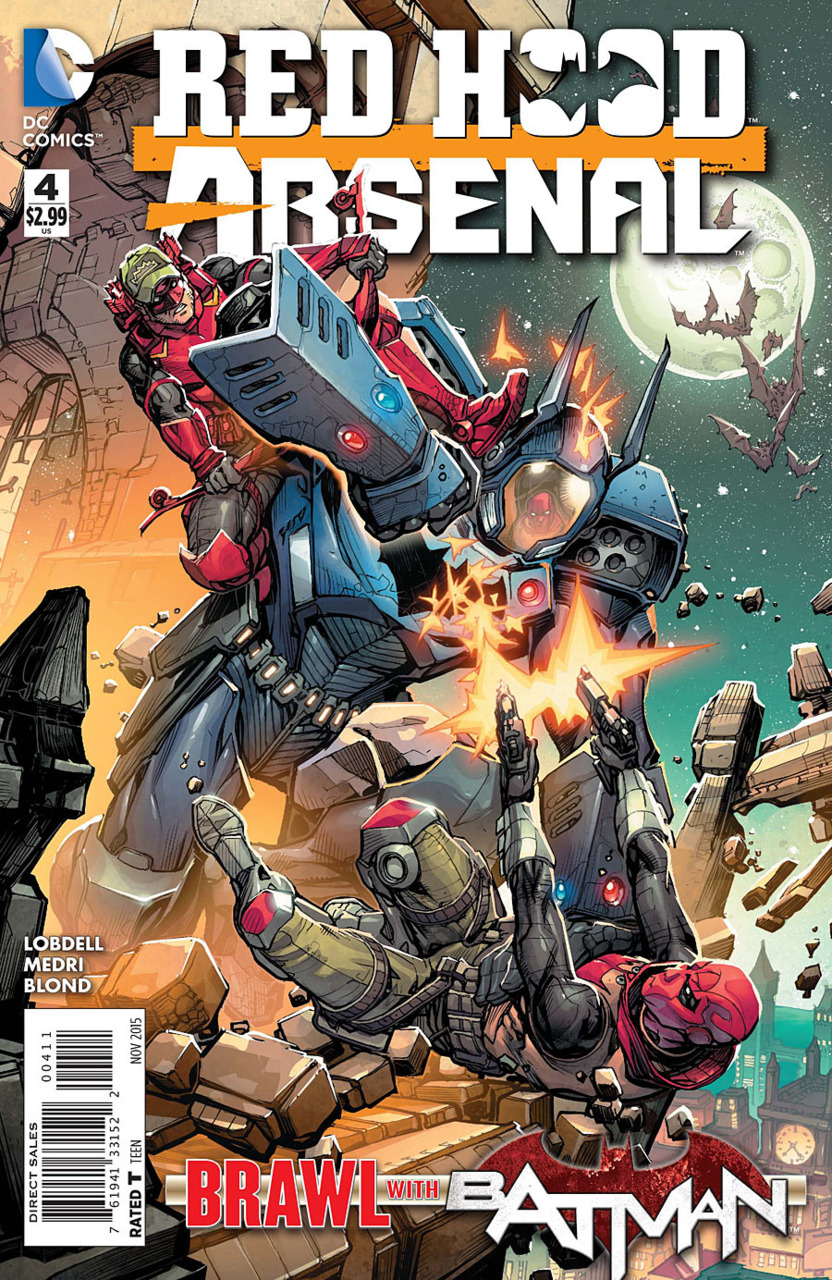 “Gotham Born” opens with Red Hood and Arsenal in battle with the Jim Gordon Batman. The two partners discuss their situation and we go into flashback mode.

We go to hours earlier, Roy and Jason are at a diner discussing the current situation in Gotham, mainly the death of Batman. Jason is not so sure that Bruce is really dead. After all, it wouldn’t be the first time. Jason changes the subject to Underbelly and his claim that he is every city where there is crime and corruption. Since the streets of Gotham is paved with the blood of the innocent, he thinks Underbelly started in Gotham and he intends to end Underbelly where he began. Roy leaves to get parts for his mendula arrows and will meet up with Jason at Gem Theater. Jason knows that Roy is lying to him but understands that he must have his reasons.

Jason takes the check from the waitress who knows him when he was an orphan in Gotham. She identifies herself as Gabby and Jason remembers her as one of the few people who cared for him before he became Robin or Red Hood. He hugs her and leaves her a large tip.

At Saint Regis, we see an Alcoholics Anonymous meeting. Roy is not at the meeting, instead he is in the sewers under the church to meet someone else, Killer Croc. Roy confesses that he has been struggling with his alcoholism lately and does not know what to do. Crock assures him that he does and he will do what he needs to do when the time is right.

We have an interlude behind the Mexican border. We see Palette from the first issue. He has gotten better after being killed by Roy and Jason in that issue and now he is meeting with Suzie Su. The two of them are going to join a team to kill Red Hood and Arsenal.

Back in Gotham, Red Hood is on the street. He sees a surveillance camera and shoots it to avoid an audience. Unfortunately, he has an audience in the new Batman. He is preparing to confront the Red Hood. Arsenal joins Red Hood. Red Hood thinks he has located where Underbelly is hiding.

We go to another flashback a few years ago. The Joker, Two Face, Catwoman, Clay Face, Mr. Freeze and Penguin are in a meeting. Joker has some device but he is interrupted by a night watchman and he is gunned down when he enters the room. Before Joker can tell the others what this device is, he is interrupted again. This time it is Batman and Jason as Robin. The two mop up the criminals. Here Robin realizes what has happened, a man was killed with laughter, and he never saw that kind of evil before. Red Hood now thinks that Underbelly was created with the death of this innocent man. The two are soon interrupted by Batman, this time Jim Gordon and we go back to the beginning of the story.

The three continue their fight until they are interrupted by Underbelly. Underbelly wants to kill Batman, Red Hood and Arsenal.

This issue is dominated by the stars. We see a little bit more of Roy’s struggle with alcohol and find out that Croc actually helped him. This increases the sympathy I have been developing for Croc after other stories involving this character and I find myself wanting to see more of him.

We finally see more of Jason’s past that has been lacking since the start of the Post Flashpoint Universe. We see a brief scene of him before he became Robin and we see one case that he worked with Batman. I really enjoyed seeing Jason’s reaction to the death of the night watchman. It was a far cry of the jerk we saw after Crisis and I really am beginning to feel for this character and understand what is motivating him as well.

I will give this issue a 4.5 out of 5 batarangs. I am taking the last 0.5 for the appearance of the current Batman, but I am interested in seeing the three of them team up against Underbelly.