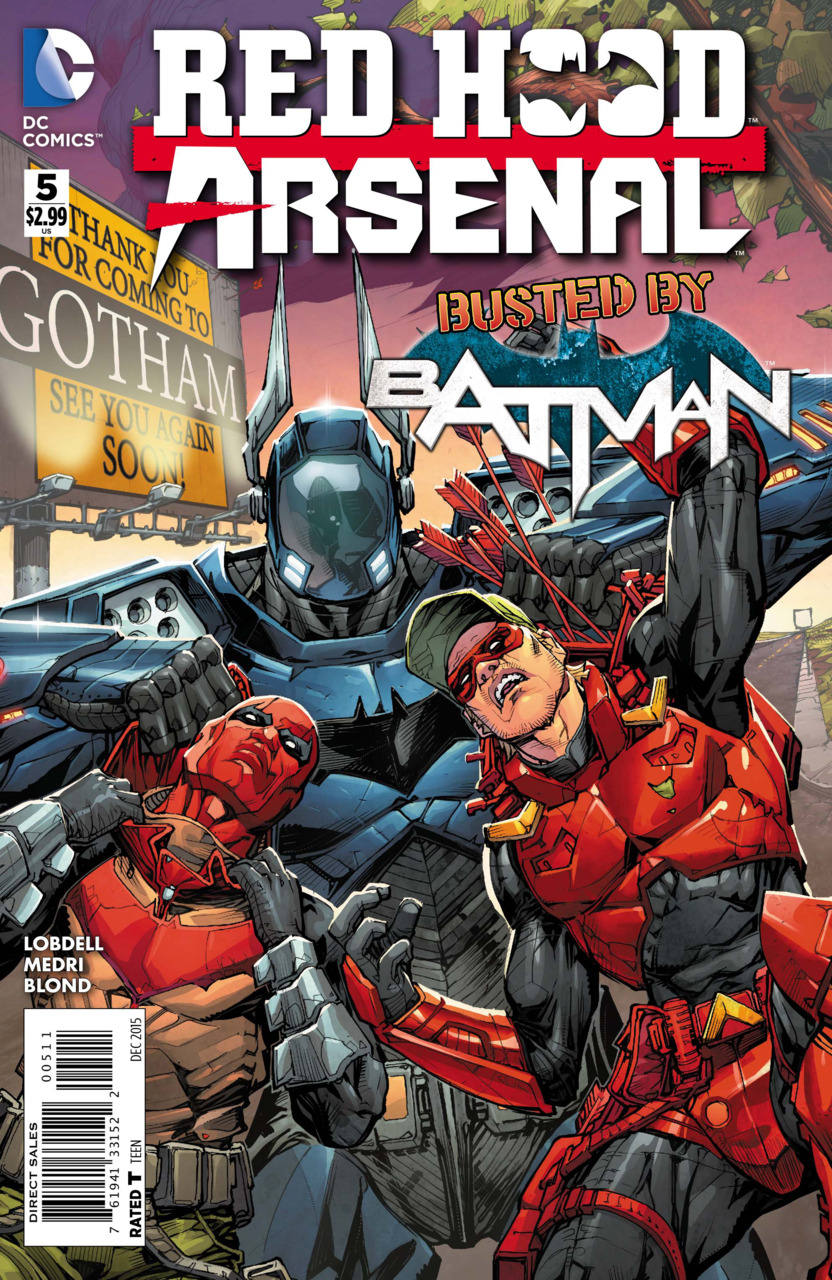 “Gotham Born Part 2” is simply a fight issue. What I enjoyed the most about this issue was that it was not “Batman” verses Red Hood and Arsenal, but rather all three against Underbelly. On to the issue recap.

“Batman” attempts to use sonic blasters to disrupt the body of Underbelly. This temporarily deafens Red Hood and Arsenal and appears to have worked. “Batman” reports that he had been tracking Underbelly for some time and determined that it was not human and therefore was not subject to any civil rights giving the “Batman” the freedom to “kill” the thing. Now he zeroes in on the former outlaws. While Red Hood and “Batman” banter back and forth, Arsenal starts counting down to the reformation of Underbelly.

Underbelly gives us some more exposition about his creation. Underbelly’s creation can be linked to the story Red Hood told in the previous issue when the janitor was killed by the Joker during his meeting with the other Arkham inmates. The device that Joker was talking about was a psychic syphon that the doctors of Arkham used to try to lobotomize the evil from the inmates. In the fight with Batman and the Jason Todd Robin, the device was breached and Underbelly was created from the “evil” stored there. From there Underbelly grew from providing a service to the crime lords to being the crime lord of the city. From there he expanded to other cities.

Again the “Batman” attacks Underbelly trying to rip it apart. Arsenal runs off talking about a plan B and Red Hood’s eyes start glowing. Red Hood seemingly attacks “Batman”. Underbelly boasts that he has control of Red Hood because he believes Red Hood has evil in his heart. Red Hood turns and blasts Underbelly declaring that he has his issues but he is not evil. Underbelly attacks both Red Hood and “Batman” when he is hit by an electronic arrow. Arsenal fired an arrow he designed to electronically deliver a gas that disrupts neural functions. During Underbelly’s exposition, Roy realized that he was a one man crowd spread out across the country. He re-calibrated the electromagnetic pulse to replicate the nerve gas that created Underbelly in reverse. By hitting Underbelly with this arrow he basically erased his existence from the planet.

“Batman” gives the duo an ultimatum to leave Gotham and Red Hood negotiates that they need to leave by noon the next day. “Batman” agrees to this condition.

We have an interlude on the Isle of Capris. Suzie and Palette meet up with the mimes, a woman and a mysterious grinning man in shadow welcoming them to the Hero Manifesto. Their mission is to destroy Red Hood and Arsenal.

The next morning Jason arrives at the Lucius Fox Center for Gotham Youth where he ended up after the death of his father and his mother was sent to prison. It is here that he comes face to face with a bearded Bruce Wayne, who does not remember who Jason is. The two talk and Jason hugs Bruce calling him a good man. Jason leaves casting a shadow of Robin while Bruce is casting the shadow of Batman. We see that Arsenal was spying on Jason at the Center musing about his own inability to confront his past while Jason seems to be doing just fine. We see that Joker’s Daughter has come up behind him holding a gun to his head and she seemingly shoots Roy in the head.

I liked this issue. I was able to get passed the “Batman” issue with the help of Jason. During their fight with Underbelly we get caption boxes where Jason compares and contrasts this “Batman” to Bruce. The fight itself was intelligent except that it seemed a little too easy to disrupt Underbelly with an EMP arrow since they tried arrows, fists and bullets before with no real effect.

It was good to see the scene with Bruce and Jason. It seems that Jason may finally get closure with his relationship of Bruce by being able to see him without the specter of Batman present. The final panel showing the two leaving each other with their respective caped shadows behind them was beautiful to see.

As for the end all I can say is Joker’s Daughter, really? I guess she has to appear in every Batman related book after all. Who is her agent?

This issue was good, but again “Batman” hopefully for the last time but this time the added “joy” of Joker’s Daughter as well.