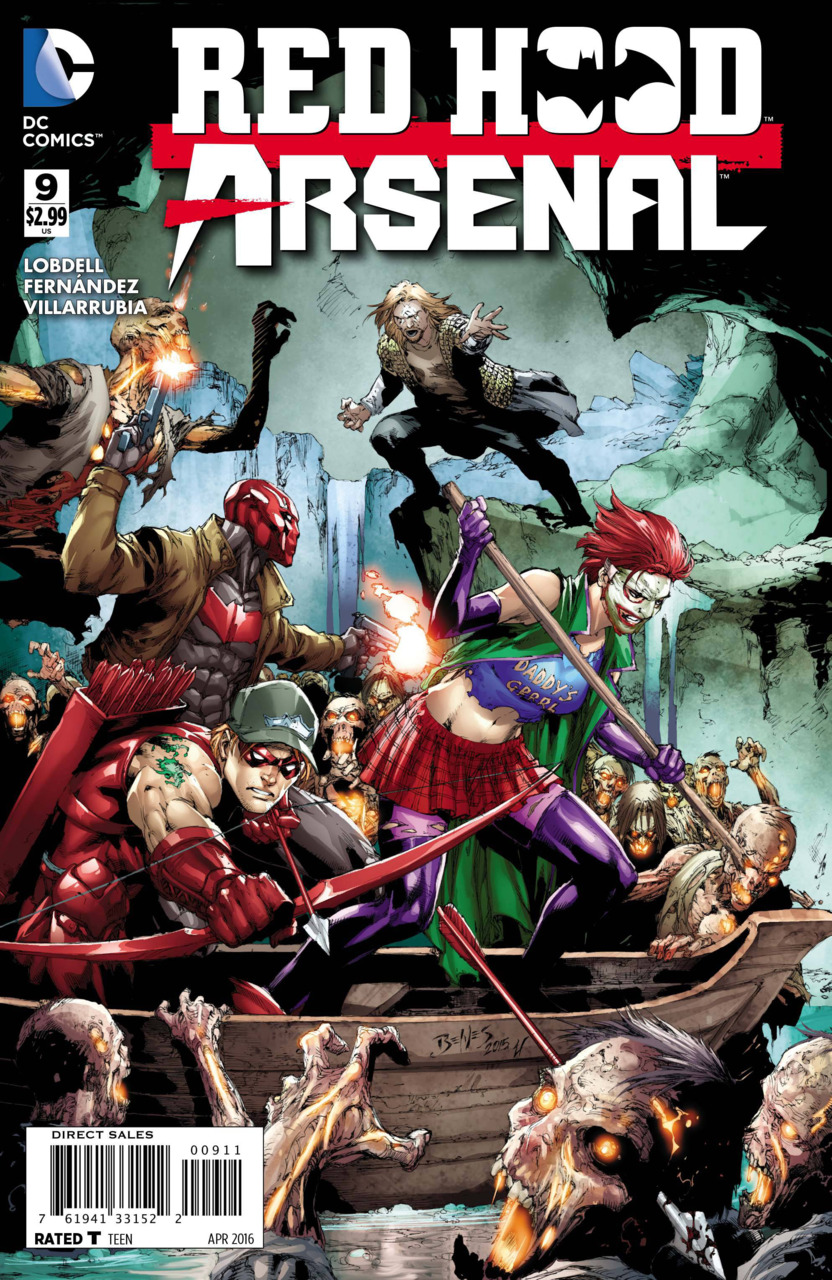 “Harmed and Dangerous Part Two” opens with Red Hood fighting the Iron Rule team we met at the end of last issue. These were the people that were terrorizing the residents of the Nethers. It appears that the Iron Rule are mercenaries themselves and they have set on killing Red Hood for free much like Jason has agreed to help the people of the Nethers for free himself. In the battle Jason falls back on the teachings of Ducra and the All Caste to give him an advantage against these people. He decides to treat them as one enemy instead of five separate threats.

Elsewhere, Roy continues his search for the Joker’s Daughter, JD. He thinks about her knowledge of the Dwellers and that she appeared to have been their target on the surface. Roy lets a flare arrow fly and he finally sees how massive his location really is. We even see an old stadium. Roy is quickly confronted by some Dwellers.

We now catch up with JD. She is still chained to the Rock and talking to Charon. Charon explains that the Dwellers were quick to follow him. He is even glad that he was ejected from the Nethers. Charon is using the Dwellers to work at collapsing the pillars that support the neighborhoods above them. When they collapse, Gotham will be swallowed whole killing millions of people. This realization starts to affect JD. Charon tries to put the blame of this attack on JD. He says that after he was driven out he almost died until he encountered the Dwellers. They instantly supplicated themselves to him and he put his plan into motion.

Roy suddenly crashes into the scene. JD is surprised that Roy was looking for her. He remarks that she is after all company property which seems to get under Duela’s skin a little. Roy remarks that without the Joker face, Duela is actually fragile.

Back with Jason, the fight continues but it is going badly for Jason. He is getting a sound beating. It is here that we learn that the Iron Rule was hired by Charon to clear out the people. Jason lets himself go into the All Caste training and allows his entire body to become a weapon, good thing as Jason has lost his guns. Suddenly the ground under their feet starts to shake and Jason is tossed through a window. One member of the Iron Rule goes after Jason while the others go to the surface.

Roy frees Duela from the chains. She is still morose and Roy calls her out. Duela tells Roy that she will be responsible for millions of deaths because of her prior encounter with Charon. Roy tells her that Charon is the responsible one not her. The two start to formulate a plan to deal with Charon. Soon they are joined by Jason. Roy notices that Jason is unarmed and hands him a gun-arrow. Jason and Roy start to move in to take out Charon but they are stopped by Duela, telling them that this is between her and Charon.

Duela approaches Charon offering an apology. Charon and her hold hands and she jumps over the chasm bringing Charon with her in a bid to kill both of them. Roy fires a grapple arrow and snags Duela’s arm leaving Charon to fall into the lava. Roy hoists Duela up and she is furious. She demands that Jason and Roy allow her to jump again. Jason grabs her saying that he will never let her go. The two end up hugging.

Later the three gather with the people of the Nethers. Duela is leaving her mask, the Joker’s face there as a symbol. The mask will remind the people that someone is watching out for them. Roy muses that it is a shame they cannot force the people to the surface. While they are having this conversation, Roy thinks he sees someone. In the shadows we see that it is the member of the Iron Rule who stayed behind to go after Jason. Jason teases Roy asking him when has he led anyone before. Roy thinks about the Iron Rule. The Iron Rule was Roy’s first attempt at a business venture and it failed when the group got out of control. Next issue Movin’ on up.

This was not a bad issue. We got some good character development and we meet a new possible nemesis for the Rent-A-Bat team.

We really get into the psyche of Duela in this issue. She comes off as an insecure girl who is struggling with her past. She is struggling so much that she is willing to kill herself in the process of righting the wrong she believes she caused. With Jason, he comes off as a possible father figure for Duela. He stands in her way of attempting to jump again. He holds her saying that he will protect her and walk with her until life gets better for her and he assures her that it will. Roy gets a new understanding of Duela as well. He sees her in her vulnerability and realizes that she is not just this insane person that Jason takes pity on. He sees her as a vulnerable girl and he is the one to rescue Duela when she jumps with Charon. Also with Roy we get a little into his head as well. He shares with Duela a little of his alcoholic past as well as lean that he brought the Iron Rule together.

The Iron Rule were not originally super powered. I get the impression that Roy brought them together as a group of mercenaries. In the fight with Jason, see hear that they are in fact dead. I am not sure what this means, whether it is that they are actually physically dead or the fact that their old selves are dead and they have changed and moved on. I do hope to see these guys again and get more of their back story as well as their past with Roy.

Duela is warming up to me and I am interested to see where this title might lead.