Review: Red Hood and the Outlaws #40 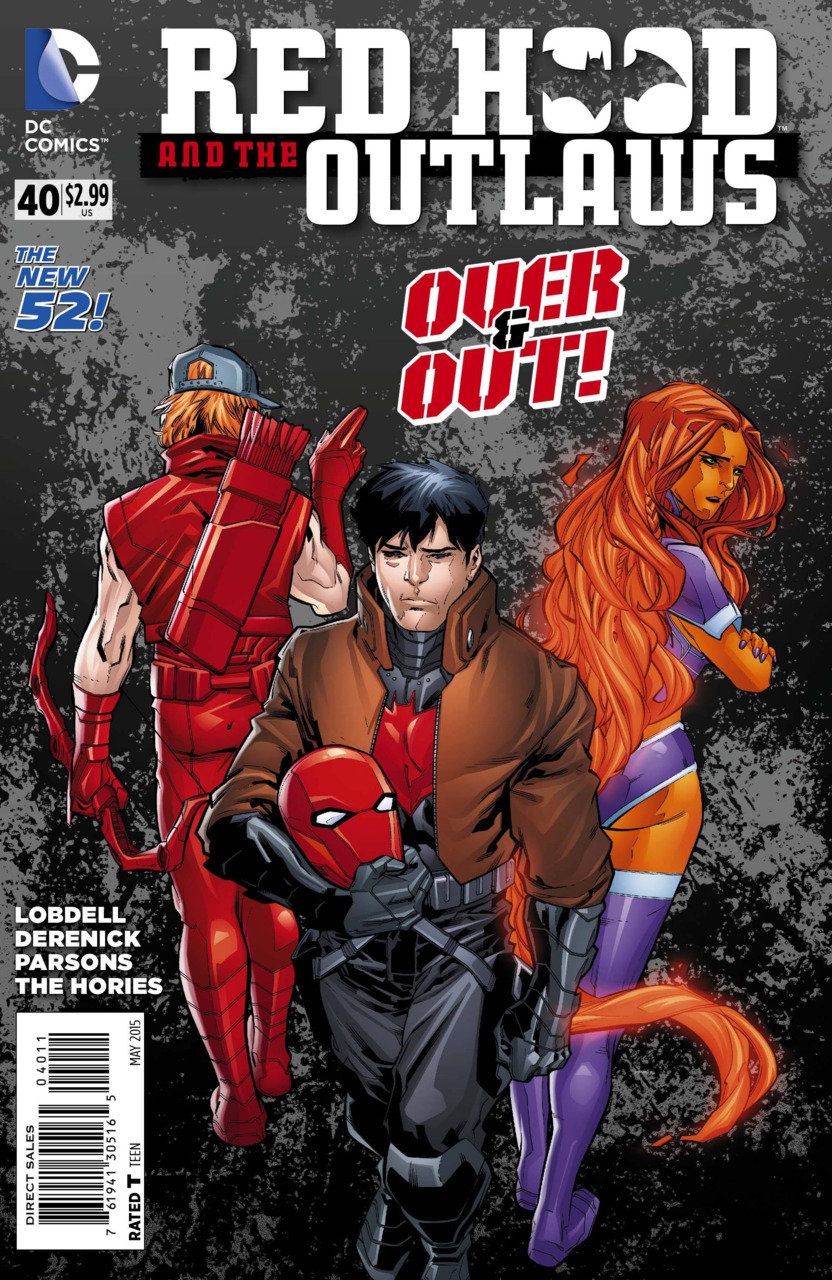 Our final issue of “Red Hood and the Outlaws” opens with a bang, and what better way that a rain of bullets sent towards our big bad – Helspont. Revealing himself as an invading warlord, Starfire informs everyone of Helspont’s reputation as a truly terrible foe. As the Outlaws and their allies move into position, each of them unleashes several attacks but nothing seems to faze him. As Helspont mocks that he usually fights warriors and not children, he unleashes a devastating attack that sends Red Hood, Arsenal, Starfire, Ravager and Crux flying.

As the group is surrounded by Helspont’s soldiers, Kommand’r reveals herself to be in league with Helspont. He reveals that Tamaran has exchanged their leader (Kommand’r) in exchange for peace…an offer that will not be bestowed upon Earth. As Komm asks for her sister’s life to be spared, Helspont refuses. Starfire seems flabbergasted about the betrayal, while Crux and Red Hood quietly discuss weaknesses in the Citadel’s armor. As Kommand’r gives into Helspont’s decision, Jason moves forward and informs him that Earth is not his to claim. As Helspont orders Kommand’r to attack, she instead blasts him with a massive explosion. Angered by her betrayal, Helspont sends Komm flying while the Outlaws spring into action.

As Red Hood picks up a massive Citadel cannon, Crux gets to work on shutting down their network via an implant that connects all of the soldiers together. Starfire proceeds to blast Helspont with her powers while Jason delivers another blast with his acquired cannon…he then tells Kory to find her sister. As Ravager and Arsenal hold off the Citadel army, Crux continues to hack into their systems. Meanwhile Starfire comes upon an extremely injured and unconscious Komm.

As Starfire’s scream of rage echoes nearby, Jason is momentarily distracted and grabbed by Helspont. Meanwhile, the Citadel soldiers fall around their leader as Crux and Ravager rush forward, but the killing blow is delivered by Arsenal when he blasts Helspont with some type of artillery vehicle that annihilates him.

As our issue ends, Kommand’r is revealed to be alive and is leaving for Tamaran where Starfire believes she may recover. As Kory will be leaving, she bids goodbye to Jason and kisses Arsenal one last time. As the ship departs, Roy decides to scavenge through the wreckage of the fallen Citadel troops…as Roy and Jason exchange a quick bro-hug, Jason realizes that he is back to being alone…something Ravager points out. However Jason laughs and says “we weren’t a team…we were friends, helping each other pick up the pieces of our lives. We were Outlaws!”

I have to say that this was a pretty decent issue, I haven’t managed to read much of “Red Hood” but what I have, I have greatly enjoyed. Overall this series brought together three stray characters from the DC Universe and allowed them to form a bond of friendship that allowed them to fight aliens, battle drug addictions and take on some massive villains like Joker and Helspont…not to mention that time when Jason became the new leader of the League of Assassins.

I really enjoyed the fight scenes in this issue; the art was spectacular to look at…especially when Starfire and Komm get to blast the crap out of Helspont. I also had to chuckle a little but when Arsenal blows up our villain with a giant vehicle that strangely reminds me of an AT-ST walker from Star Wars.

My one sour point comes from how quickly the Outlaws break apart…it’s completely understandable that Kory would leave with her wounded sister, but couldn’t Arsenal and Red Hood have joined her??? I mean, they have had a few space adventures during the book…it just seems a bit flimsy of an excuse for Starfire to go off alone. Also, Arsenal peaces out for almost no reason…and Jason just sort of lets him go. No explanation just, “hey…you can go on without me, I’m gonna go look through some junk.” What’s even stranger is that we know from our solicitations that these two will be getting back together very quickly when they star in their new “Red Hood/Arsenal” book. So it just seemed rather odd, wouldn’t it have been better to have the two stick together to give our new title a stronger jump start???

Overall this issue was action packed with a somewhat lukewarm ending, however I am looking forward to see what Arsenal and Red Hood have in store this coming June.